Sysco (NYSE:SYY) leverages its scale for similar benefits -- and it just increased those benefits through a transformative acquisition of US Foods. The acquisition sent Sysco's shares soaring.

Sysco becomes the undisputed leader
Sysco and US Foods are the two largest companies in a highly fragmented industry. Sysco's share of the food-service distribution market is about 18% and US Foods' is 9%. Post-merger, Sysco expects the company's share to be just 25% because some customers will want to diversify their distribution partners.

Sysco is paying for the acquisition with $500 million in cash and 87 million shares of stock; the stock is valued at $3 billion. In addition, the company will assume $4.7 billion in US Foods' debt. The total purchase price is $8.2 billion, which is 9.9 times US Foods' earnings before interest, taxes, depreciation, and amortization.

Although the purchase price is fair, it is not what sent the stock soaring. In an interview with the The Wall Street Journal, the CEO of a Pittsburgh hotel remarked that, aside from Sysco and US Foods, "there's really no other supplier that has the broad range of products."

The two companies were the only competitors that could serve as a one-stop shop for customers who needed a wide array of products. Now, should the merger pass regulatory scrutiny, Sysco is the only company that can meet the needs of large customers -- which means it can raise prices and earn higher profits. This is why the market is excited about the combined company and why you should be too.

The Wal-Mart of food distribution
Sysco's ability to procure products at lower prices than its competitors and distribute them efficiently is similar to Wal-Mart's competitive advantages. When Wal-Mart enters a new market, small businesses chatter their teeth in fear because the world's largest retailer offers customers everything the small retailers sell and at lower prices.

Wal-Mart secures its low prices via purchasing power. For many suppliers, Wal-Mart is crucial to sales. Clorox, for instance, derives more than one-quarter of its sales from Wal-Mart. Many other suppliers, no matter how diversified their sales channels, also rely on Wal-Mart for reaching their customers. As a result, Wal-Mart wins price concessions that it then passes on to consumers.

Like Sysco, Wal-Mart derives advantages from having a large and efficient distribution system that allows it to deliver goods to its stores at a low per-unit cost. This enables the company to earn higher profits than its smaller competitors.

Sysco and Wal-Mart's competitive advantages are so similar, in fact, that the two companies even earn similar operating margins. 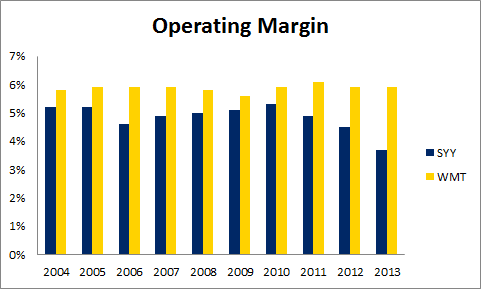 Sysco, it seems, really is the Wal-Mart of food-service distribution.

Post-merger valuation
Investors who owned Sysco before the US Foods announcement are probably happy with the stock's 8% price appreciation since the merger was disclosed. However, the rest of us need to determine if now is a good time to buy -- even after the run-up.

After the merger, the company expects to have $65 billion in sales and about $2 billion in operating cash flow. Sysco normally spends about $600 million on capital expenditures. The company expects $600 million in synergies to be realized in three years. Assuming the synergies only offset additional capital expenditures required by US Foods, normal free cash flow should come out to about $1.4 billion.

As of Sysco's last quarterly filing, the company had 591 million diluted shares outstanding. The company will issue an additional 87 million shares to owners of US Foods, so the post-merger share count will be 678 million.

If you divide $1.4 billion by 678 million shares, you get expected free cash flow of $2.06 per share. Sysco trades at about $37, or 18 times estimated post-merger free cash flow. This is not screaming cheap, but any additional cost savings as a result of the merger would provide upside for shareholders.

Bottom line
Sysco's acquisition of US Foods solidifies its dominance of the industry. Its competitive advantages, not unlike those of Wal-Mart, secures its profitability for the decades ahead.