In the midst of the dismal enrollment numbers announced so far for the Obamacare health exchanges, Medicaid has stood as the silver lining in the clouds. Recent reports about issues with the Medicaid enrollment process, though, have raised questions about the number of individuals actually being enrolled in the hybrid federal-state program. Are the Obamacare Medicaid numbers provided by the federal government too good to be true? 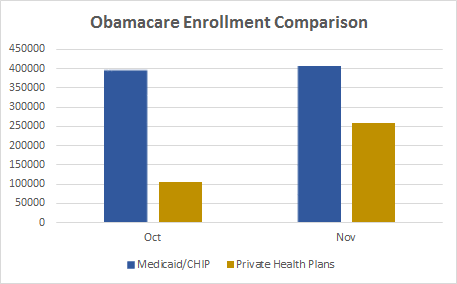 While the higher Medicaid numbers were viewed by many as an indicator of success for at least part of Obamacare, some expressed concern that problems could arise. Enrollment skewed too heavily toward Medicaid could deprive insurers of healthy individuals signing up for private health plans. Without enough healthy members, these plans would lose money -- ultimately resulting in higher premiums and potentially deterioration into the so-called "death spiral".

On further review ...
Picture a running back sprinting into the end zone for a touchdown only to have the officials announce a few minutes later, "After further review, the ruling on the field is overturned." That's what essentially could now be happening with the Obamacare Medicaid enrollment numbers -- at least to some degree.

Reports are coming in from across the nation that the Obamacare website has erroneously informed many Americans that they qualified for Medicaid when they really didn't. The National Association of State Medicaid Directors expects to soon release information about the magnitude of the problem.

Another serious problem has also been identified. The Center for Medicare and Medicaid Services, or CMS, told the 36 states using the federal HealthCare.gov website a couple of weeks ago that Medicaid eligibility information wasn't transferring correctly to the state agencies.

The first problem could mean that the Medicaid enrollment numbers previously reported by the White House are overstated. By how much the figures are off has yet to be determined. The second problem doesn't impact the validity of the Medicaid enrollment numbers reported so far, but it does mean that some people who think they're enrolled in Medicaid really aren't -- at least not until the issue is resolved.

Implications
If the number of individuals affected by the Medicaid enrollment problems isn't very large, the impact of the issues should be minimal. However, if the problem turns out to be widespread, the implications could ripple across the health-care system.

The likelihood is that the magnitude of the Obamacare Medicaid enrollment issues isn't enough to hurt these large insurers too much. However, WellPoint could be hurt to some extent by a possible corollary effect.

Individuals who were told that they qualified for Medicaid wouldn't have signed up for private health insurance. However, if they really didn't meet Medicaid eligibility criteria and don't find out about it quickly enough, these individuals could miss out on obtaining private health insurance altogether. Even if they do find out, it's possible that they could obtain private insurance later than they otherwise would have.

This scenario could affect WellPoint more than the other large insurers. Aetna and UnitedHealth took a cautious approach toward participation in state Obamacare exchanges. WellPoint, on the other hand, jumped aboard the exchanges in every state where it operates. As a result, the insurer could feel the pinch if too few members enroll in the private Obamacare plans.

Back in October, Medicaid experts were saying that they didn't exactly know why the Medicaid enrollment figures looked so good. The old saying now appears to be confirmed yet again: "If something seems too good to be true, it probably is."