Please ensure Javascript is enabled for purposes of website accessibility
Log In Help Join The Motley Fool
Free Article Join Over 1 Million Premium Members And Get More In-Depth Stock Guidance and Research
By Meetu Anand - Dec 15, 2013 at 8:00AM

DineEquity, The Cheesecake Factory, and Darden have enjoyed varying degrees of success, but which one is the best for you?

During times of economic uncertainty,  most budget-conscious consumers generally  curb eating out as much as possible. This has curtailed demand and placed many casual dining establishments in a precarious position. There's also increasing competition from fast-casual restaurants due to the perception that these restaurants do a better job at delivering good deals.

One of the reasons why fast-casual is eating casual's lunch is because fast-casual restaurants are speedier. The slow labor force recovery from the depths of recession has also resulted in a shift to fast-casual restaurants, which offer relatively cheaper meals. Despite this, casual dining chains like DineEquity (DIN -1.44%), The Cheesecake Factory (CAKE -3.58%) and Darden Restaurants (DRI -0.36%) have gained strongly this year. 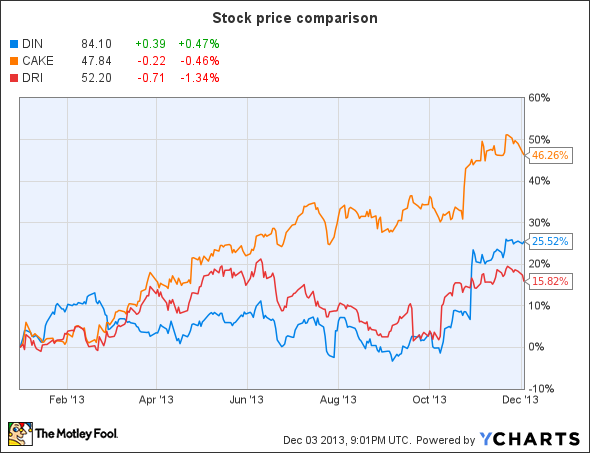 The economy is still hibernating, however, and consumer spending is still cautious. So let's look at how these companies have performed and how attractive they are as investments.

A closer look at DineEquity
DineEquity reported a stellar third-quarter where it blew away all expectations. The owner of two national chains, Applebee's and IHOP, the company posted adjusted earnings of $1.10 per share and this beat the Street's average estimate by $0.18 per share.

However, revenue declined about 25% versus the same quarter a year earlier to $161 million. This was expected due to refranchising activity as DineEquity is shifting focus to a franchise-based business model that offers better margins and better cash flow. Being a franchise-driven business allows the company to focus less on day-to-day restaurant operations.

IHOP same-restaurant sales were positive for the second consecutive quarter, increasing 3.6%; this was the largest gain since the first quarter of 2008. Third-quarter sales improved on the back of higher average guest checks, which was largely due to favorable changes in the product mix.

The comps at Applebee's were down marginally. To help with this, DineEquity launched a joint venture with ESPN (the worldwide leader in sports coverage) to debut ESPN Fan Zone at Applebee's restaurants across the country. In addition, 6% of restaurants have been remodeled and the rest will be completed by end of 2014. These two initiatives should yield good traffic in the future.

The Cheesecake Factory is also looking at international expansion and plans to open three to five restaurants in the Middle East and Mexico under licensing agreements this year. On the domestic front, the company plans to open nine new company-owned restaurants versus its prior guidance of 8 to 10 openings.

In the third quarter, the company repurchased 2.1 million shares at a cost of $90.2 million. The company has bought back 3.4 million shares in the first nine months of the year for $135.5 million. During the fourth quarter, The company aims to spend as much as $65 million for share repurchases. This is an additional $30 million of capital allocation compared to its previous guidance.

Darden: The one to avoid
As compared to DineEquity's two chains, Darden has eight chains to manage with each serving different types of guests. This makes it difficult for Darden to devise any companywide strategy. The company's first-quarter results turned out disappointing and it looks like its weak performance might continue in the future.

Consolidated comps at its three core brands – Olive Garden, Red Lobster, and LongHorn Steakhouse – were down 3.3%. The company managed to grow its top line a shade above 6% versus the year-ago period to $2.16 billion. As a result of higher expenses, earnings declined by a whopping 37% from the year-ago period and came in at $0.53 per share. This missed the consensus estimate by $0.17 per share.

Darden is looking to reverse the decline in earnings by venturing abroad. The company is trying to expand internationally and intends to move into Malaysia by partnering with a local chain known as Secret Recipe. Secret Recipe operates more than 300 units in Malaysia, China, Thailand, Indonesia, Singapore, Philippines, Brunei, Cambodia, India, and Australia. This expansion is important as Darden might be facing the headwinds of a slower macroeconomic recovery, the adverse impact of the Affordable Care Act, and faltering consumer confidence next year.

Bottom line
Of the three, DineEquity and The Cheesecake Factory look like good bets. Darden has a very big portfolio that seems to be difficult to manage. The company is looking at international growth, but it might be some time before its venture materializes.

DineEquity and The Cheesecake Factory are both expanding at a good rate. DineEquity is switching its business model to a franchise-based one and its execution has been good so far. The Cheesecake Factory is looking at different international markets to provide momentum for its revenue growth rate. Comps are positive at both these restaurants, and their strategies indicate that they could continue their positive performance in the future.