As an interested owner of more than a few tech stocks, I (like most) tend to forget that 2013 has been a very good year for entertainment stocks. 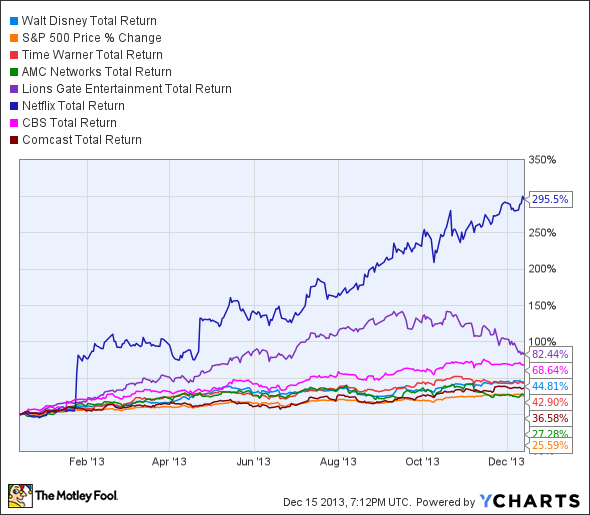 Billion-dollar box offices and shifting television consumption habits have created opportunities for every studio. Looking ahead to 2014, I think the best entertainment stocks will cash in on these four attributes:

1. A rich inventory of currently successful content. Great content pays the bills for the major entertainment stocks, which is why Walt Disney is spending so much time and money developing its Marvel franchises. It's also why the House of Mouse struck a deal with Paramount for distribution rights to future Indiana Jones films.

2. Creative upside with owned properties or lucrative licenses. Staying power matters. The longer a franchise thrills audiences, the more opportunities there are to sell syndication rights and DVD and Blu-ray special editions at ridiculous margins. Sony is hoping to trap audiences in this sort of web with its expanding Amazing Spider-Man franchise.

3. Affordable distribution. The more control a studio has over how its properties are distributed to viewers, the more profits it can earn from said properties.

4. A reasonable valuation. Buying before the full value of any single or collection of franchises is realized is the best approach to beating the market with a portfolio of entertainment stocks.

Which ones best embody these advantages heading into 2014? Here are my two picks.

Why it's a winner: AMC may be one of the most influential networks on cable TV right now, but you wouldn't know it from the valuation. The stock trades for 16.5 times next year's consensus profit estimate, well below the 27.3% average annual earnings growth analysts expect over the next five years. AMC's  $4.66 billion market cap is also a fraction of the $21.86 billion Netflix commands at the moment. Does that mean we can expect AMC shares to at least triple? No, but I think the numbers suggest a lengthy runway for the stock.

Catalysts: We all know the success of The Walking Dead, but did you also know that AMC has 60 properties in development and at least two new shows set to debut in 2014? Turn is based on the book Washington's Spies and is set in colonial America. Halt & Catch Fire is a period drama set in Austin in the early stages of the personal computing  revolution. A third, the Breaking Bad spinoff Better Call Saul is in active development thanks to a deal with Sony Television. A hilarious website mockup gives viewers a taste of what might be.

Why it's a winner: The Warner empire is vast and growing. Analysts are targeting about $31 billion in 2014 revenue for the company overall versus $51 billion for Disney. Yet the House of Mouse commands roughly twice the market cap. I'd expect at least some narrowing on the merits of studio licenses and growing library of bankable TV content from The CW and HBO, followed by further gains as Warner develops its DC Comics franchises.

Catalysts: There's huge upside in DC's properties. Look at Arrow, which has become The CW's top show while seeding the elements of a more expansive TV and movie universe. Meanwhile, Warner is on track to separate from its Time magazine unit in the second quarter. Warner Bros. stock could surge in the spinoff as investors see the growing value of its franchises.

Now it's your turn to weigh in. Which do you expect to be the top entertainment stocks of 2014? Leave a comment below to let us know what you think.