Bridgewater Associates, the hedge fund founded by Ray Dalio, has a fascinating composition. It mixes concentrated investments in macroeconomic categories (usually through large, liquid ETFs) with a plethora of smaller positions. The fund's equity holdings disclosed on Sept. 30, 2013, stood at $11.8 billion. Three holdings made up 89% of the fund: the SPDR S&P 500 ETF (NYSEMKT:SPY), the Vanguard FTSE Emerging Markets ETF (NYSEMKT:VWO), and the iShares MSCI Emerging Markets ETF (NYSEMKT:EEM).

The last 11%, or $1.3 billion of holdings, was split among no fewer than 308 positions. Out of these positions, 241 represented less than 0.1% each of the total. The smallest position was a $95,000 stake in Huntington Bancshares (NASDAQ:HBAN). Now, to you and me, $95,000 may seem like a decent bit of coin. But in relation to $11.8 billion, it's infinitesimally small -- expressed as a percentage, it's 0.0008% of the total. To put this in perspective, picture a boulder that weighs one ton -- 2,000 pounds. Now take a slice of bread, tear off a fourth of that slice, and place that fourth on top of the boulder: This is the equivalent relationship in weight between the value of the Huntington Bancshares position and Bridgewater Associates' total publicly disclosed equity portfolio.

Perusing the holdings of such a massive fund is endlessly fascinating, but it also illuminates some of the futility of trying to understand a particular hedge fund's decisions from a quarter-end disclosure that lists only positions held. Nonetheless, let's see if we can glean some insight from the latest filing.

A significant concentration slowly shifts
Bridewater Associates' investment in three huge ETFs has gradually evolved as the U.S. economy has improved. If we go back a little less than two years ago to 2011, we see that the fund held a huge bet on broad-based U.S. stocks through the SPY ETF, with a smaller position in emerging markets through the Vanguard and iShares ETFs: 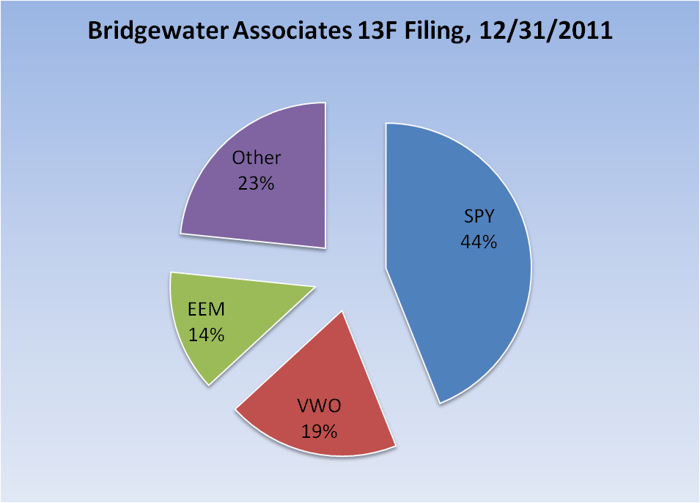 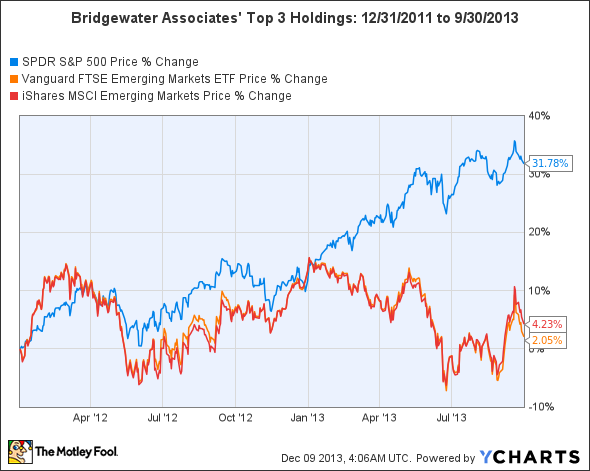 As the U.S. markets continue to gain traction, it appears Bridgewater is taking profits along the way and reallocating the proceeds to emerging markets, effectively flipping the trade on its head. Here's what the composition looks like today: 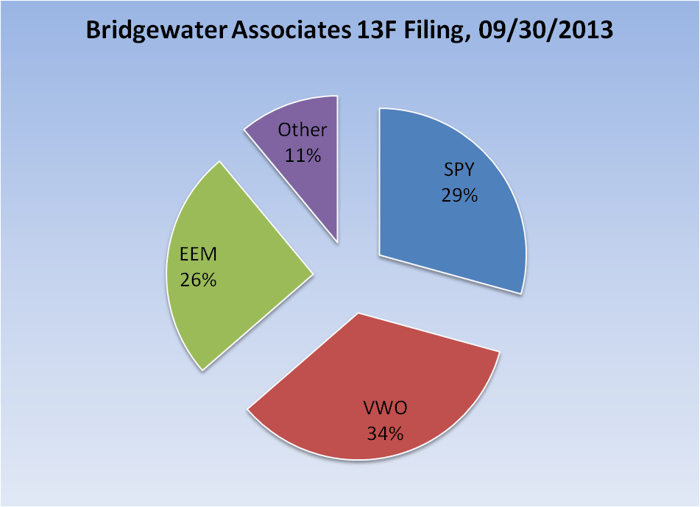 The fund still has deep exposure to U.S. equities but may be anticipating a general investor rotation into emerging markets as the global economy improves and investors regain their risk appetite.

Other noteworthy actions: goodbye to Ben
In other developments, the fund closed out its position in Franklin Resources (NYSE:BEN), the global investment manager better known as Franklin Templeton Investments. At 0.16%, this was one of the fund's more prominent holdings. Don't be surprised if you see this company show up in a future filing; it appears to be a favored trading position. Over the last three years, the fund has disclosed positions as small as $367,000 and as large as the $18.3 million stake it held on June 30, 2013. Franklin Resources has basically replicated the year-to-date return of the S&P 500 index but with a little more volatility, which may explain why it appears to be a frequent trade rather than a held position: 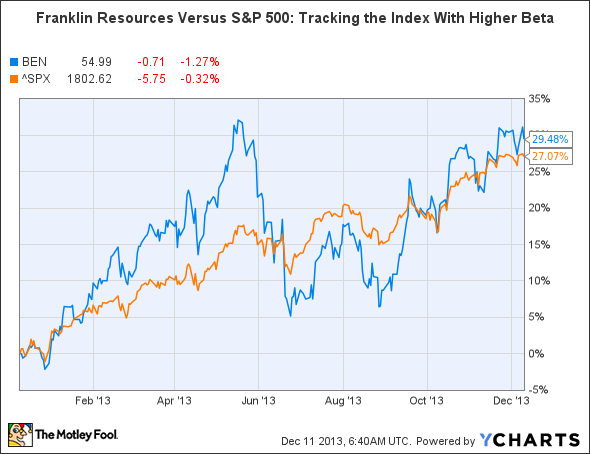 An anchor and a tech turnaround
At 0.1% of total portfolio value, General Electric (NYSE:GE) is one of the larger holdings filed in this quarter outside of the "big three" ETFs. GE joins about 22 other stocks with a weighting of at least one-tenth of a percent, which encompasses a broad representation of U.S. tech, industrial, and retail giants, including Home Depot (NYSE:HD), Intel (NASDAQ:INTC), IBM (NYSE:IBM), Oracle (NYSE:ORCL), American Express (NYSE:AMX), and UnitedHealth Group (NYSE:UNH). Positions like these likely provide a counterweight to the fund's overall concentration in emerging markets.

GE has posted similar numbers so far in 2013 compared with 2012. Through the first three quarters of reported earnings, total revenue decreased 1.7% from the prior year, operating income was nearly identical to 2012's at 9.7%, and net income, at 9.3% of sales, showed less than a 0.5% improvement. But as a representative S&P 500 stock with bright prospects in an improving U.S. economy, GE seems a credible choice as an anchor to the fund's non-ETF positions.

Finally, the fund added struggling tech behemoth Hewlett-Packard (NYSE:HPQ), valued at 0.15% of the total portfolio on Sept. 30, 2013. HP's declining revenue is a long-term concern as it seeks to compete in both the shrinking PC market and newer growth opportunities in the enterprise and cloud-computing markets. The company has been able to prop up quarterly earnings through cost-cutting during 2012 and 2013, and the investment community has viewed this action more or less favorably, as HP's stock is up nearly 90% this year. HP will be an interesting holding to review on Bridgewater Associates' next 13F filing. Additional shares may indicate that the fund expects revenue growth to follow the operations optimization, while a static position or trimming may indicate that the fund is merely looking for a quarter or two of further momentum in the stock.