America's oil boom plays a significant role in keeping oil prices lower in America. In fact, the price differential between American benchmark West Texas Intermediate oil and global benchmark Brent recently widened to an eight-month high. This is caused by rising U.S. oil output that has crude stockpiles rising, leading to lower oil prices in North America. That's why investors need to ask themselves if oil prices will continue falling in 2014.

According to some analysts, the answer is yes. In fact, one Wall Street analyst sees oil prices dropping down to $70 per barrel in 2014. However, that's not an outlook held by all. The U.S. Energy Information Agency, for example, expects to see WTI averaging around $95 per barrel in 2014. Several other big Wall Street firms agree with that assessment, as many see oil prices in America averaging in the low-to-mid $90s for 2014.

Just because that is consensus, however, doesn't mean investors should expect steady oil prices in 2014. As part of the EIA's forecast, it also estimates that the potential exists for oil prices to trade for anywhere between $66 per barrel on the low end and $115 on the high end, as the following chart indicates. 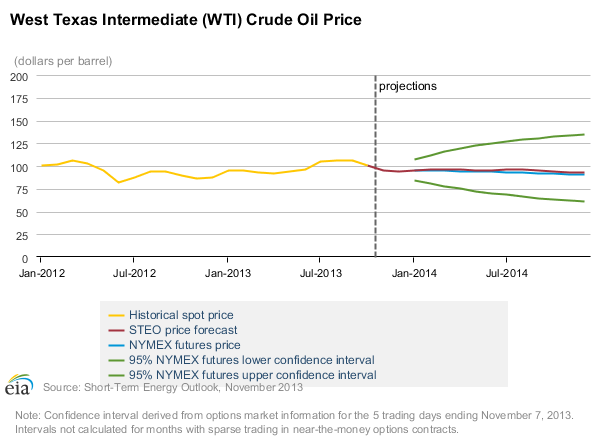 If oil prices do remain steady or rise in the year ahead, it means that 2014 will be a very profitable one for oil investors. For example, EOG Resources (NYSE:EOG) and Continental Resources (NYSE:CLR) both can earn top-notch returns at current oil prices. EOG Resources earns triple-digit after-tax rates of returns in its Eagle Ford and Bakken operations because of its low-cost structure and focus on efficiency. Meanwhile, Continental Resources can earn rates of return over 50% with oil over $100 per barrel.

The difference lies in how falling oil prices will impact oil producers in 2014. Continental Resources can still make money on oil even if prices do drop to the low end of the EIA's estimate. However, other producers, such as Permian Basin-focused Pioneer Natural Resources (NYSE:PXD) or Bakken-only producers like Kodiak Oil & Gas (NYSE: KOG), need oil prices to remain higher in 2014 to make money.

In some areas of the Permian Basin, oil prices need to be more than $80 per barrel or the wells drilled won't make any money. Under that scenario, Pioneer Natural Resources and other Permian drillers could be forced to cut back on drilling plans.

It's the same story for higher-cost Bakken producers like Kodiak Oil & Gas. While the company does a good job of hedging its production, oil prices of $75 per barrel would cut the company's internal rate of return from 54% at an oil price of $95 to just 35% on some of its wells. A plunge in oil prices could cause Kodiak Oil & Gas to cut back on its capital spending in 2014 as its profits wouldn't be able to keep up.

While it's anyone's guess where oil prices will go in 2014, there is always the potential for volatility. Investors worried about falling oil prices might want to consider a company like EOG Resources or Continental Resources. Both are more focused on keeping drilling costs low, meaning both companies will still profit even if prices do fall.