Please ensure Javascript is enabled for purposes of website accessibility
Log In Help Join The Motley Fool
Free Article Join Over 1 Million Premium Members And Get More In-Depth Stock Guidance and Research
By Meetu Anand - Dec 25, 2013 at 9:00AM

Should investors bet on a turnaround at Diamond Foods yet?

Diamond Foods (DMND.DL), the maker of Emerald Nuts and Kettle Chips, is off to a rough start in fiscal 2014. It seems that the ouster of the CEO and the CFO following an accounting scandal that involved improper payments to walnut growers won't lead to a quick turnaround. In addition, competition from the likes of J&J Snack Foods (JJSF 0.02%) and Kellogg (K -0.38%) is going to make life more difficult for Diamond.

Comparing the three, we find that Diamond Foods has been a clear laggard compared to its peers over the last two years. Diamond Foods' management is promising a brighter future going forward, but can they deliver? 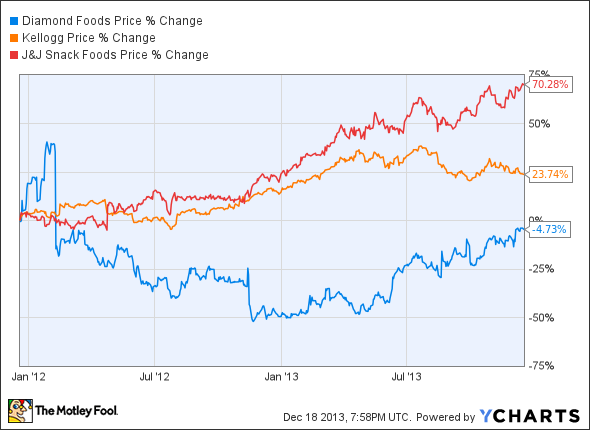 Looking closely at Diamond Foods
In its first quarter, Diamond Foods reported that nut sales declined 17.1%, which was partly offset by a 1.2% increase in the snacks segment. As a result, consolidated sales declined 9.2% versus the same quarter a year ago to $234.7 million .

In addition to this, walnut supplies remained challenging which only added to the woes of Diamond as nut sales declined. Excluding one-time expenses, Diamond posted a profit of $0.18 per share. This represented a 25% decline as compared to the same period in the previous year.

Going forward, Diamond remains on track to achieve its targeted cost savings of $35 million-$40 million through fiscal 2013 and 2014 by improving its supply chain and manufacturing output. For example, these initiatives resulted in a 200 basis point improvement in gross margin in the first quarter. In addition, Diamond also expects year-over-year earnings improvement through the rest of fiscal 2014.

Diamond is improving its innovation initiatives and expanding the distribution base to achieve better results in the future. The company is set to launch new products and flavors in the snacks segment in the latter half of fiscal 2014 and beyond.

Beaten to Pringles by Kellogg
Diamond Foods would have been the second-largest snack maker in the world after PepsiCo had the deal for acquiring Pringles from Procter & Gamble gone through. However, the revelation of the accounting scandal upset the deal plans and Pringles was finally purchased by rival Kellogg.

Kellogg, the world's largest cereal maker, went from being a U.S.-only cereals and snack foods company to a global player after acquiring Pringles. The company posted robust third-quarter results recently with revenue of $3.72 billion . Excluding the impact of acquisitions, dispositions and foreign exchange movements, revenue was up 0.5% from last year.

Going forward, Kellogg announced a four-year long efficiency-enhancement program -- Project K -- which is expected to cost in the range of $175 million-$200 million for 2013. This program aims at optimizing supply chain and improving global productivity by 3%-4% every year, with the major contribution coming from supply chain initiatives.

Kellogg expects sales growth in the range of 4%-5% versus the prior expectation of around 5%. This reflects expectations of weaker sales in some categories. Consequentially, full-year earnings are expected to be at the lower end of the previously guided range of $3.75-$3.84 per share.

Another good option
J&J Snack Foods is also focusing on acquisitions and mergers for growth. For example, in October 2013 the company acquired the assets of New York Pretzel, which makes soft pretzel products sold mainly in the Northeast region to retailers and food service locations.

J&J Snack Foods' fourth-quarter results were satisfactory as its sales increased 5% from last year. For the quarter, net earnings increased 4% to $1.08 a share from $1.03 a share a year ago . The company continues to gain from its 2012 acquisition of Kim & Scott's Gourmet pretzels.

J&J Snack Foods is known to make back-to-back additions to its menu. The company announced new products under its popular brand, SUPERPRETZEL. The new additions include SuperTwists, Sweet Cinnamon Soft Pretzel Bites, and Bavarian. These additions would fuel top-line growth going forward as pretzels have been a staple in sports stadiums in the U.S. since the 1970s.

Bottom line
Diamond Foods has been trying to keep itself afloat and recover from the problems it has faced recently. Its turnaround plan seems to be in place. However, the company announced that it expects to derive the benefits of its strategies in the latter half of fiscal 2014. By then, it will be clear how the new launches and the company's advertising are taking shape. Until then, it is better to stay on the sidelines and see how the company fares in the coming months. In the meantime, investors should take a closer look at J&J or Kellogg, both of whom are doing well.