Please ensure Javascript is enabled for purposes of website accessibility
Log In Help Join The Motley Fool
Free Article Join Over 1 Million Premium Members And Get More In-Depth Stock Guidance and Research
By Ted Cooper - Dec 26, 2013 at 8:57AM

The similarities between Altria Group, Philip Morris International, and Coca-Cola say a lot about what makes these companies good long-term investments.

Coca-Cola (KO 1.26%) is frequently cited as a model of a wonderful business. Warren Buffett, the preeminent investor in wonderful businesses, rarely goes an entire interview without mentioning how great Coca-Cola's business is.

It is a wonder, then, why Altria Group (MO 0.29%) and Philip Morris International (PM 1.77%) are never mentioned in the same breath as the world's largest carbonated-soft-drink company. The two tobacco companies share so many important traits with Coca-Cola that long-term investors ought to hold all three in the same regard.

Altria Group, Philip Morris International, and Coca-Cola share similar competitive advantages
Below is a chart that compares Altria's total return (stock price appreciation plus dividends) to Coca-Cola's total return since 1993. Investors would have been much better off owning Altria over a long holding period than Coca-Cola. 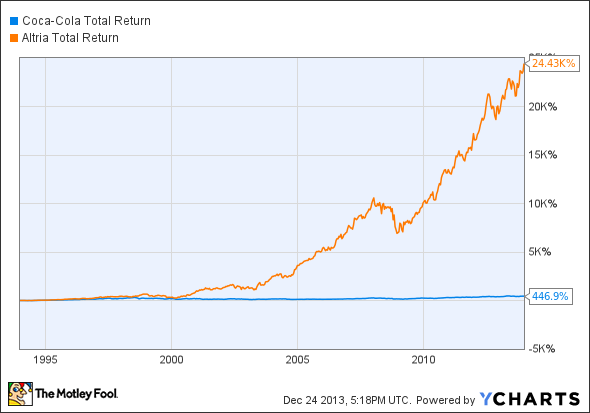 A fast-growing start-up or a company in the midst of a turnaround may be able to beat Coca-Cola by this wide of margin, but you would not expect a stable cash cow like Altria to do so. Clearly, Altria creates significant value for its shareholders.

Coca-Cola, Altria, and Philip Morris International have a commanding lead in their respective markets. Coca-Cola's namesake beverage has a leading 17% of its market. The company's broader portfolio has a 42% share of the U.S. carbonated- soft-drink market, a 34% share of U.S. liquid-refreshment-beverages market, and a similar lead in international markets.

Altria and Philip Morris International own the leading cigarette brand -- Marlboro -- which has a commanding share of its market. Marlboro has a 42.6% share of the U.S. market, and its international market share is larger than the next two brands combined.

Altria, which manufactures and distributes Marlboro within in the United States, has a 50% share of the U.S. cigarette market and 30% of the U.S. cigar market. It also owns the two leading snuff brands -- Copenhagen and Skoal -- which combine for more than 50% U.S. market share.

Having a dominant market share confers significant advantages to Coca-Cola, Altria, and Philip Morris International. For soft drinks and cigarettes alike, sales are dependent on effective advertising and customer loyalty. All three companies are able to outspend competitors on advertising because of superior scale.

The scale advantages and customer loyalty give Coca-Cola, Altria, and Philip Morris International tremendous pricing power, as evidenced in their stable gross margins. A stable gross-margin percentage indicates that consumers are unwilling to switch to lower-priced substitutes. A company that does not have pricing power -- that is, the ability to charge higher prices than competitors without losing customers -- would have a declining or cyclical gross margin as it constantly adapts its price to compete with other brands. That is not the case for these three companies.

In addition to pricing power, Coca-Cola, Altria, and Philip Morris International have significant economies of scale in manufacturing and distribution. Each company spreads fixed costs across a greater number of products sold than its rivals are able, thus enabling them to earn higher operating profits.

In addition, each company has an unmatched distribution network -- and bargaining power with third-party distributors -- that allows them to put their products in more stores than competitors are able; a small cigarette brand cannot secure wide distribution, so it does not get wide exposure, and therefore it cannot steal share from Marlboro. This distribution advantage protects each company's market position from competitors.

Bottom line
Coca-Cola, Altria, and Philip Morris International own leading brands that command premium prices and have unmatched distribution capabilities. Though Coca-Cola may be Warren Buffett's favorite example of a wonderful business, he could just as accurately use Altria or Philip Morris International in its place. Long-term investors should take note of the three companies' similarities and consider them equals.

Ted Cooper has no position in any stocks mentioned. The Motley Fool recommends Coca-Cola. The Motley Fool owns shares of Coca-Cola and Philip Morris International. Try any of our Foolish newsletter services free for 30 days. We Fools may not all hold the same opinions, but we all believe that considering a diverse range of insights makes us better investors. The Motley Fool has a disclosure policy.