Should Mattel produce a plus-size Barbie? Or could a plus-size version of the classic doll promote obesity, as some critics suggest? 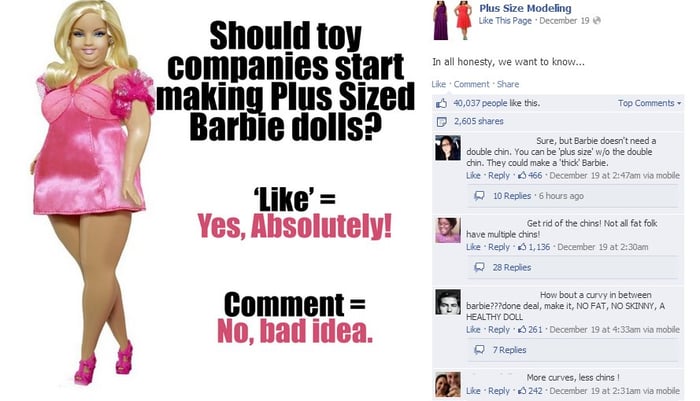 Barbie has been around for 53 years, and the doll has often been criticized for teaching impressionable young girls some questionable life lessons. The most common criticisms are her unrealistic figure, which some say could lead to girls becoming anorexic, and her shallow personality.

A 1965 version of the doll came with a bathroom scale permanently set to 110 pounds, and a 1992 talking version known as Teen Talk Barbie rattled off one-liners such as, "Will we ever have enough clothes?," "I love shopping!," and "Math class is tough!"

That's not to say Mattel hasn't improved Barbie over the years, though.

In 1967, Mattel released the first African-American Barbie, a bold move during a tumultuous time in America. Additional Barbie dolls from other ethnic groups were released over the following years. In 1997, Mattel widened the doll's waist to fit more realistic, contemporary fashions.

The plus-size Barbie debate, however, poses an interesting question -- is the artist's depiction plus-size or obese? Critics have pointed out that the design, with a double chin, suggests that plus-size Barbie is not just curvy, but unhealthily obese.

To clarify things, we should compare some statistics -- 60% of American women reportedly identify themselves as "plus-size". However, according to a Gallup-Healthways poll, only 26% are obese -- defined as having a BMI (body mass index) equal to or greater than 30.

While the artist may have missed the mark of creating a realistic, curvy Barbie with the mockup, the debate is still valid.

Sure, Barbie is a stylized doll, and dolls don't have to be realistically proportioned. However, Barbie is different, since the doll has the body of a grown woman and is targeted at young girls.

Therefore, should Mattel make a more realistically proportioned version of Barbie? Perhaps they should, since a dramatic change could actually help the company sell more Barbie dolls in the long run.

What Barbie means for Mattel

To understand why Mattel should be concerned about the public perception of Barbie, we need to see how important the franchise is to the company's top line. Mattel's business is divided into three business segments: Mattel Girls & Boys Brands, Fisher-Price Brands, and American Girl.

Let's see what these businesses sell and how they fared last quarter:

That's why Barbie's future is so important to Mattel.

However, that 3% growth was extremely significant for Mattel, since it was the first time in four consecutive quarters that the Barbie franchise posted positive sales growth.

Another line of Mattel dolls, Monster High, has been growing at a much faster rate.

Although Mattel didn't disclose the exact number of Monster High dolls sold, the company primarily attributed the 28% gain in its Other Girls Brands to rising sales of the "Goth Barbies," which debuted in July 2010. 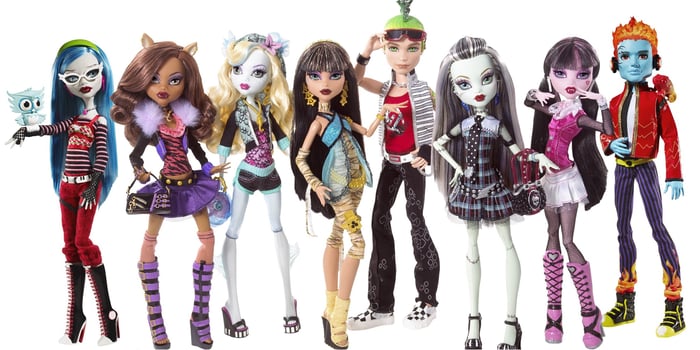 The Monster High dolls were created by Garrett Sander, with illustrations by Kellee Riley. The line features offspring and relatives of classic monsters such as Medusa, Dracula, Frankenstein's monster, the Mummy, and the Creature from the Black Lagoon. The franchise, like Barbie, also includes TV specials, direct-to-DVD movies, books, accessories, and software.

Yet the popularity of Monster High is a double-edged sword. It boosts Mattel's top line while cannibalizing Barbie sales. More importantly, it highlights another image problem that Mattel has with Barbie -- although Monster High dolls are just as thin as Barbie dolls, they're simply newer, edgier, and cooler. It's like comparing Miley Cyrus to Doris Day.

Is it time to reboot Barbie?

For over five decades, Barbie has been the "All-American" doll. However, the role and image of the woman in American society has changed dramatically during that period.

An interesting comparison can be made between Barbie and Hasbro's (HAS -0.11%) G.I. Joe toys.

Hasbro's original G.I. Joes, made in the 1960s, resembled Ken dolls with uniforms, scars, and over-sized dog tags. By the 1980s, however, boys' tastes had changed -- they were obsessed with comic book-like heroes and villains. In response, Hasbro rebooted G.I. Joe in 1982 under the brand "Real American Hero," with the help of a Marvel comic book series and an animated series. The classic soldiers were replaced by superhero-like soldiers wielding special weapons such as katanas and laser guns -- forming a new foundation for the franchise that has been expanded upon by the two recent live-action films.

With Barbie, it may be time for Mattel to consider a similar reboot. After all, its own Monster High dolls could soon eclipse the classic doll in popularity.

The big question, however, will be how to reboot Barbie. Will she be an astronaut, a business woman, or a doctor instead? Will she have more realistic body proportions than her classic model? Will Mattel make model-size, regular-size, and plus-size versions of the doll just to satisfy everyone?

What do you think Mattel should do with Barbie, dear readers? Let me know in the comments section below!

Want to learn more about analyzing companies like Mattel and Hasbro?

Can a 'Magic: The Gathering' Movie Be a Blockbuster for Fox?

‘Transformers 4’ Is a Hit -- We Reveal the 2 Biggest Winners

‘Transformers: Age of Extinction’ Trailer Kicks Off a New Trilogy With Dinobots
376%