How this indicator is pointing to a decent year ahead for the S&P 500 and the Dow Jones Industrial Average.

It's a new year, and Foolish investors' thoughts will naturally turn to the outlook for the S&P 500 (^GSPC -1.13%) and Dow Jones Industrial Average in 2014. One useful predictor of future market conditions is U.S. household net worth, because history suggests that so long as it's growing, then investors should feel optimistic about equity markets. However, when it stagnates, it's time to consider some downside protection.

The roaring 1980s
When it comes to U.S. household net worth, the warning indicator is two consecutive quarters in which the metric grows less than 1%. My earlier article goes through the basics of household net worth and outlines the evidence of its usefulness from 1960 to 1980. The graph below shows the relation between household net worth (numbers on the left-hand side) and the level of the S&P 500 (on the right-hand side). 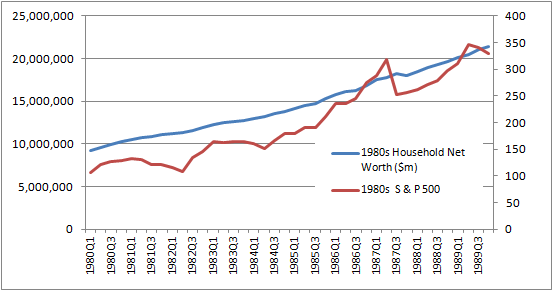 The 1980s were notable because not once did net household worth growth less than 1% for two consecutive quarters. While this may seem unremarkable, take a close look at what happens at the end of 1987. The market experienced the famous Black Monday crash, when the Dow Jones fell more than 22% in one day in October. However, U.S. household assets weren't significantly affected, and the fact that there was no warning sign would have encouraged investors to stay in the market despite the trauma of Black Monday.

The 1990s
This graph picks up where the last one left off, marking three instances in the '90s when household net worth grew less than 1% for two consecutive quarters. These instances are marked along the blue line representing household net worth; the numbers above each instance indicate how many quarters each lasted. 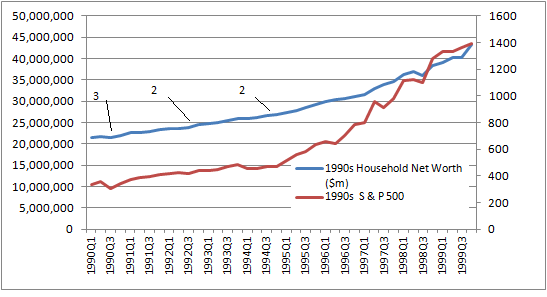 The decade was a favorable environment for long investors, and although there were a few warning indicators, they weren't particularly strong, and investors' fortunes wouldn't have been significantly altered if they followed them. The important thing is to avoid significant downside. 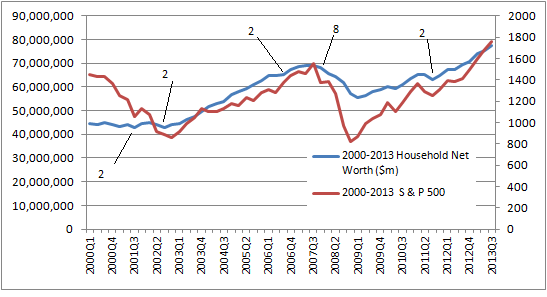 While there were only a couple of minor warnings from 2000 to 2003, the market dropped significantly in that period. Clearly, market valuations matter, too, and merely following household net worth isn't enough. Meanwhile, the indicator in Q4 2007 presaged six quarters of negative growth in net household worth and would have proved a useful signal to avoid the worst of the 2008-2009 crash.

Right now, however, the current situation looks favorable, as household net worth has risen nicely over the past couple of years.

Is this indicator valid?
In conclusion, the evidence is that following movements in US household wealth is a useful way to gauge the future direction of the market. However, the 2000-2003 period demonstrates that the indicator can't be looked at in isolation. Investors will need to feel comfortable with market valuations, as well as the underlying trends in the economy.

Foolish investors will also need to consider that each recession appears to be getting more and more severe, so this kind of warning system is well worth following, because if the trend continues, then the next recession could be quite nasty.

In addition, there have been plenty of periods where the indicator didn't signal a protracted decline. However, in these cases investors would not have missed out on much upside, either. It's not a perfect science, but it's a useful metric for investors to follow, and right now, it's indicating further gains for the markets in 2014.