Happy New Year! Here's one thing everyone can do beginning this year that could make them thousands of dollars over the course of a lifetime.

Now that 2014 is upon us, many people will take a few moments to reflect on 2013 and resolve changes for 2014. There will be resolutions to wake up earlier, become more active or productive, consider matters of faith, or perhaps something as simple eating one more salad each week.

In addition to those admirable goals, there's one thing everyone should consider as we head into 2014, and that is automatically saving a specific amount each month by putting into an S&P 500 (SNPINDEX:^GSPC) index fund for retirement.

The smallest amounts can make the biggest differences. Source: Flickr/401(K) 2013.

The best strategy for all of us
In finance, putting a fixed amount into a stock each month regardless of its price is known as dollar-cost averaging. Since many individuals are lured into buying stocks when the prices are high and selling when they are low, dollar-cost averaging can help alleviate this "mistiming," of the market.

Put simply, by investing a fixed amount into a mutual fund or index fund each month, a dollar-cost averaging strategy can yield astounding returns over a lifetime. Consider the example below to see how impactful this would have been over the last 15 years. 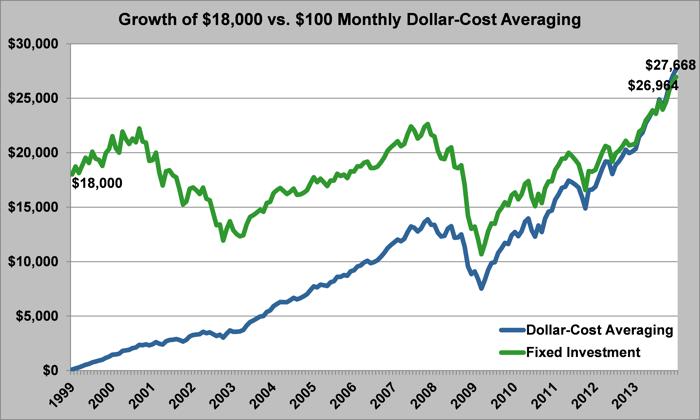 There is a common refrain in America that "you have to have money to make money," but as you can see, someone who had $18,000 15 years ago is no better off than someone who has the patience and diligence to save and invest a little each month.

Using the same example, if the person saving $100 each month just saved one additional dollar each month, the difference is even more incredible: 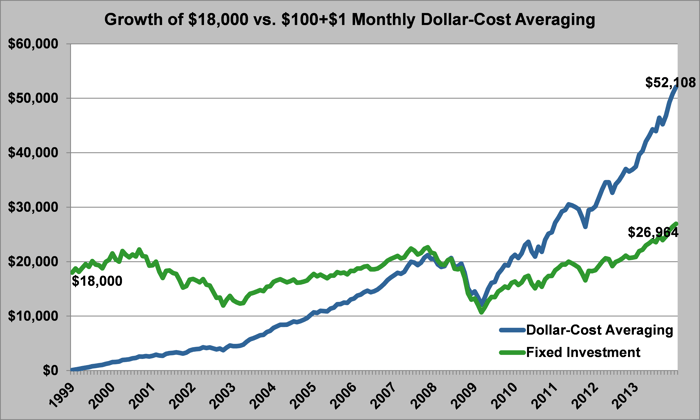 The Foolish bottom line
So often in this world we are told that it is only the rich who get richer, and the average person has no chance at securing a future for themselves. Yet through advances in technologies, setting up a brokerage account has never been easier, and almost every company will let its customers set up an automatic transfer to invest a fixed amount into a specific fund each month.

While it doesn't seem like a lot, the reality is, diligent and patient savings can make a world of difference over a lifetime.

I'd encourage you to start 2014 by making a resolution to save a little each month and set up an automatic investing plan. You'll be glad you did.