Although we won't know until February what stocks Warren Buffett bought and sold in the fourth quarter, a quick analysis of his most recent investments shows that Berkshire Hathaway (NYSE:BRK.A) (NYSE:BRK.B) probably had one of its best quarters ... ever.

Although the acquisition of ExxonMobil (NYSE:XOM) was the big news in the fourth quarter, perhaps the biggest news was just how well Berkshire Hathaway did. Provided no stocks were added or sold in the Berkshire Hathaway portfolio, Buffett probably made almost $9.5 billion in the fourth quarter, and the portfolio had a return of more than 10.3%. It should be noted the S&P 500 also had a remarkable October to December, and it, too, was up 9.9%.

Only three of the 43 stocks Berkshire held finished in the red for the quarter, and the high-flying Media General (NYSE: MEG) led the pack, as its stock price grew by almost 60%: 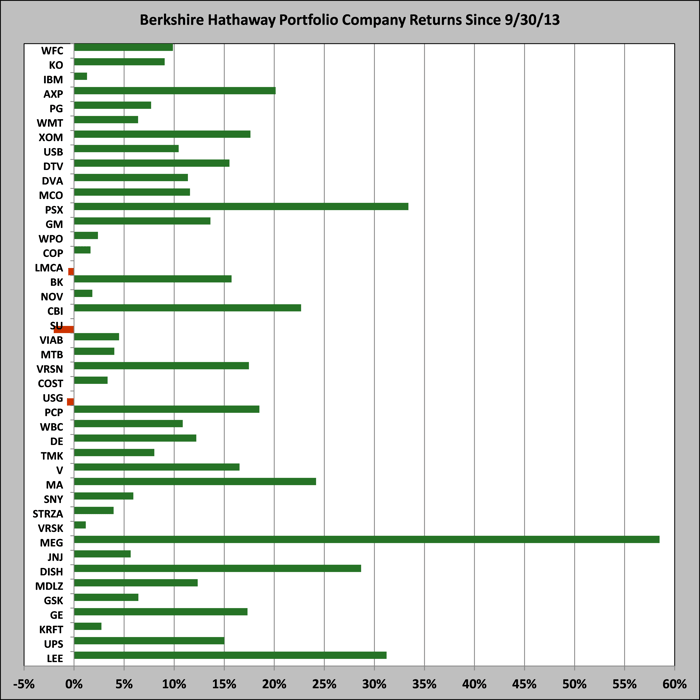 Media General reported third-quarter earnings that exceeded analysts' expectations, and the stock continued its torrid 2013 run through the end of the year. The company's stock rose by more than 400% on the year, and Berkshire Hathaway has watched its investment grow from $20 million to probably just over $100 million year to date. Many have noted that the future of broadcast television is dead, but this is one company bucking that trend.

In total, 23 of Berkshire Hathaway's investments returned more than the S&P 500 during the fourth quarter, and on average those company's stock prices grew by more than 19%.

However, a lot of those companies were some of the smallest ones in the Berkshire Hathaway portfolio (the previous chart is sorted by largest holdings to smallest), and in fact just five companies contributed to 70% ($6.7 billion) of the $9.5 billion in growth that Berkshire saw in the third quarter:

Phillips 66 (NYSE:PSX) had a phenomenal October to December, as its stock was up by more than 33%, representing an unrealized gain of $524 million. In fact, despite Phillips 66 representing just 10% of Berkshire's holdings in IBM and Procter & Gamble, it returned a greater raw dollar amount than those two companies combined.

Unlike Media General, the earnings at Phillips 66 represented somewhat of a disappointment; however, the announcement of an increased dividend, and the continued boom in the American energy market, helped contribute to higher prices.

It's also worth adding here that 2013 closed with an announcement that Berkshire Hathaway would be buying a specialty flow improver unit of Phillips 66 to add into its portfolio. When the move was announced, Buffett said: "I have long been impressed by the strength of the Phillips 66 business portfolio. The flow improver business is a high-quality business with consistently strong financial performance, and it will fit well within Berkshire Hathaway."

American Express also had a remarkable run to end the year, and while it, too, had a solid third-quarter earnings announcement, it benefited from the continued realization that the payments industry is an ever expanding one, and the biggest players could continue to see growth in business and profits.

The final company worth noting is the previously mentioned ExxonMobil, which Berkshire began adding the in the second quarter, but its position wasn't disclosed until November. Like Phillips 66, Exxon has benefited from increased attention surrounding the viability of the American energy markets, but also the reality that Buffett thinks highly of it also put it on many people's radars. Considering it continues to be the top of class in the burgeoning industry, it should come as no surprise its stock continues to climb.

In all, Berkshire Hathaway and Warren Buffett had a great run to end 2013, and while the book value growth of the company may fall short of the S&P 500 return, it nonetheless had an astounding year.