Retailers delivered a mixed bag in 2013. Yet the New Year brings new opportunity for retailers and investors alike. Moreover, with consumer confidence on the rise in 2014, it could be a big year for retail stocks. Here are two names in particular that are well positioned for a comeback in the year ahead.

This downward dog will make a comeback

It's no secret that lululemon athletica (NASDAQ:LULU) was a big loser last year. Shares lost as much as 20% in 2013, following a string of quality-control issues and leadership flubs that flattened investor confidence. The trouble started in March, when the yoga apparel maker was forced to recall 17% of its signature luon pants from store shelves because of a sheerness problem with the product's material. On top of costing Lululemon more than $67 million in annual revenue, the luon debacle was a major blow to the company's reputation for making quality gear.

Adding to Lululemon's transparency problems, CEO Christine Day shocked shareholders by announcing her decision to resign for "personal reasons." Talk about giving up when the going gets tough. Given these missteps, Wall Street doesn't have lofty expectations for Lululemon these days. Nevertheless, long-term investors could use that to their advantage.

Lululemon's stock is now trading at around $58, or about 24 times forward earnings. For comparison, athletic-apparel rival Under Armor (NYSE:UAA) currently trades at 48 times next year's earnings, with shares priced near $87 a pop. Moreover, there's a clear opportunity for Lululemon to recover in the year ahead and reward patient investors.

For starters, Lululemon has named Laurent Potdevin its new CEO, effective this month. Potdevin comes to Lulu from Toms Shoes, which makes him a strong cultural fit for the yoga retailer. Not to mention that a fresh perspective should help Lululemon streamline kinks in its supply chain and quality control going forward.

In addition to its new CEO, Lululemon has new leadership in key roles, including logistics and sourcing. At the end of October, the retailer hired Tara Poseley to act as chief product officer, along with Jennifer Battersby as Lululemon's new senior vice president of sourcing. Also, Lululemon's controversial founder, Chip Wilson, will be replaced by Michael Casey in the role of chairman of the board, in June -- a move that can only benefit the company, particularly after Wilson's offensive remarks last year about women's bodies in yoga pants.

A bag half full
Coach (NYSE:TPR) is another retailer that's finally headed in the right direction after enduring a rough 2013. The leather goods and accessories brand suffered last year, as fast-growing rival Michael Kors (NYSE:CPRI) continued to poach customers from Coach. Shares of Coach significantly underperformed both Michael Kors and the broader market in 2013: 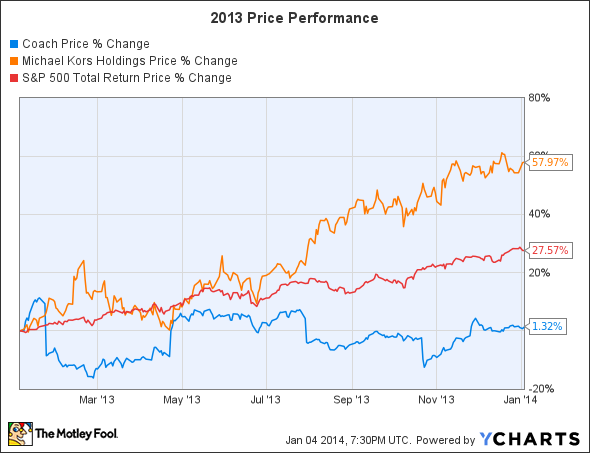 Shares of Michael Kors soared nearly 58% last year, to trade around $81 a pop. Meanwhile, Coach posted a gain of just 1.32% on the year, with shares trading at $56 apiece heading into the New Year. Nevertheless, Coach should make a comeback in the year ahead.

Similar to Lululemon, Coach is going into 2014 with a new management team. Stuart Vevers will take over for Reed Krakoff as the company's new creative director, while Victor Luis will succeed Lew Frankfort as Coach's CEO this month. Luis is well versed in all things Coach, having spent the past eight years building out Coach's operations in China and Japan. In his new role as CEO, Luis will guide Coach's transformation into a lifestyle brand.

New product strategies should also help fuel Coach's growth in the year ahead. Coach is introducing new product categories, including men's accessories and women's shoes, as part of its vision of becoming more of a "lifestyle" brand like Michael Kors.

Updated product designs from Coach's new creative director, Stuart Vevers, are set to hit stores this fall. This should spark a recovery in the stock if the new products are a hit with consumers. Until then, the stock's 2.4% dividend yield makes Coach a worthwhile bet for value investors.

Takeaway
Coach and Lululemon are both beaten-down stocks with strong underlying fundamentals. On top of that, both retailers have recognizable branding, which allows them to sell their products at a premium. With low expectations built into their current valuations and new leadership in place, both stocks should reward patient investors in the year ahead.