The Dow Jones Industrial Average (DJINDICES:^DJI) is flat in midafternoon trading as U.S. factory orders rose above expectations. The Commerce Department reported today that orders for goods produced in U.S. factories rose 1.8% to $498 billion for November, compared to the expected 1.6% mark. One reason for the jump was a 21.8% increase in aircraft orders. One company benefiting from the rise in aircraft orders is making headlines today for other reasons. Here are the details.

Big leverage
Contract negotiations between Boeing (NYSE:BA) and the International Association of Machinists and Aerospace Workers finally ended in a narrow agreement. Friday's vote closed with 51% in favor of Boeing's eight-year contract extension that would guarantee production of the company's next-generation 777X aircraft in Washington state. Sixty-seven percent of union voters rejected a similar offer in November.

The vote guarantees production of the 777X to Washington, including the fuselage, wings, and final assembly; politicians in the area had said that Boeing would take wing fabrication elsewhere, at the very least, if the latest offer was rejected.

There's three sides of implications from this recent development. On one side, this agreement secures thousands of jobs, as well as ensuring that Washington state remains "the aerospace capital of the world," The New York Times quoted Gov. Jay Inslee as saying after the vote.

The vote is also a major win for the company, which can now replace its pension-style retirement plan with a 401(k)-style contribution plan. In an era in which large corporations have tens of billions in underfunded pension obligations, this will be a huge move to cut costs.

For investors, this is a win for two reasons. One, it removes a huge amount of uncertainty regarding where the 777X will be produced while also assuring Boeing won't be hit by any machinist strikes through 2024. Also, had Boeing actually taken more than just its wing production out of its Everett, Wash., plant, the company would have likely faced manufacturing problems as the new workforce gained experience in actually building the 777X -- a potentially costly setback for Boeing, its customers, and its investors. 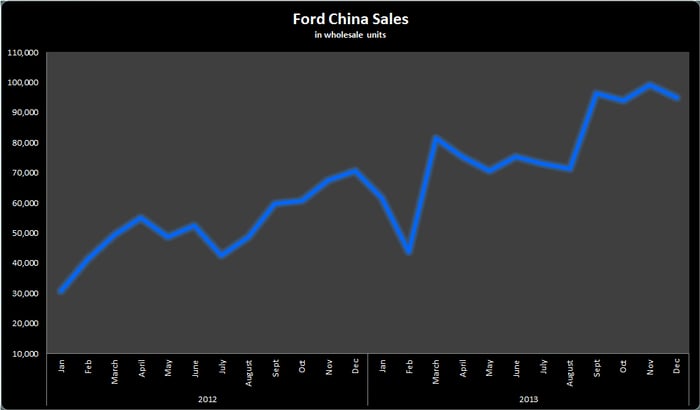 Ford was late to join the sales race in China and is a significant distance behind U.S. rival General Motors (NYSE:GM) in the nation. Ford announced today it sold more than 935,000 vehicles in China last year, a 49-percent increase from 2012, as its Focus continues to sell extremely well and new models gain traction.

While Ford will likely sell more than 1 million vehicles in China this year, it will still be far behind General Motors and Volkswagen, which are each expected to announce 2013 sales that top 3 million units. The folks at the Blue Oval obviously have a long ways to go to reach that level, but Ford's nearly 50% growth in 2013 was enough to pass Japanese rivals Toyota (NYSE:TM) and Honda, which respectively sold 917,500 and 756,882 vehicles last year in China.

Ford had trailed the two Japanese automakers in China for much of the last decade. It now has a chance to keep its lead while completing the goal of doubling Ford's Chinese market share from 3% to 6%, fueled by 15 vehicle launches by the end of 2015.