Leading defense stocks Lockheed Martin (NYSE:LMT) and Boeing (NYSE:BA) have had a great year in the stock market. Even investors' concerns over the potential decline in U.S defense budget couldn't keep these companies' stocks from rising in 2013. Let's examine Lockheed and Boeing's performance in the fourth quarter, and the potential adverse effect the U.S budget cuts could have on their revenues in 2014, and see which one has more room to grow,

Revenues and profit margins
We'll start with the third-quarter earnings and expected fourth-quarter results. Lockheed Martin  hasn't done well in the past quarter: The company's revenues declined by 4.4% during the third quarter, year over year. Northrop Grumman (NYSE:NOC) also suffered a 2.6% drop in revenues in the past quarter. Conversely, Boeing's net sales rose by 10.6%.

How these companies are expected to perform in the fourth-quarter Based on Boeing's current  guidelines, the company's revenues are likely to change course and fall in the last quarter of 2013 by nearly 3% -- mainly owing to its defense, space & security segment.

The third-quarter decrease in Northrop Grumman's revenues   mostly stemmed from lower sales in aerospace systems and information systems. The company estimates it will finish 2013 with a 3.6% decline in revenues. Based on these estimates, the fourth-quarter is likely to result in a more than 10% plunge in sales.

Most of Lockheed Martin's  third-quarter revenue decline came from its products segment,  which dipped by 6.7%. And since the company projects that its annual revenues will decrease by roughly 4.6%, those estimates mean that in the fourth-quarter, the company's revenues are likely to drop by 7.6%.

But despite Northrop Grumman and Lockheed Martin's revenue shortfalls in the third-quarter, they were able to improve their profit margins in the past quarter.

The chart below shows the operating profitability of all the above-mentioned defense companies. 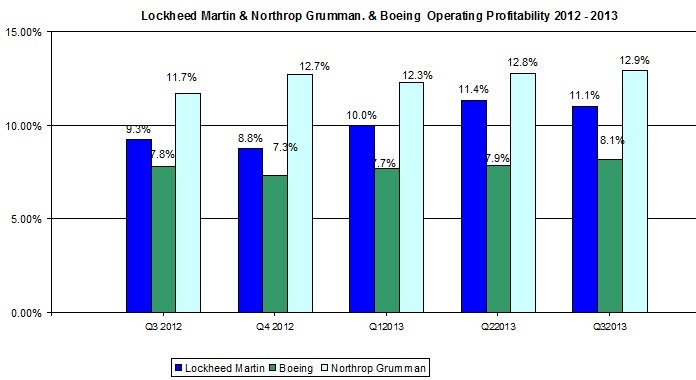 As you can see, all three companies were able to improve their profitability.

Now let's take a closer look at how anticipated defense budget cuts could affect these companies' revenues for next year.

During fiscal 2013 http://www.whitehouse.gov/omb/budget/Historicals/ the U.S. Defense Department's budget  dropped 2.7% to $633 billion from  $650 billion the previous year. For fiscal 2014, the White House estimates that the DOD's budget  will be slashed a further 5.6% to reach nearly $600 billion. But according to the recent budget approved by Congress, defense spending may reach $625 billion in 2014 -- close to the 2013 budget. Let's base our analysis on the White House projections of a 5.6% slash in DOD budget and see how it could affect these companies' revenues in 2014.

Nearly 82% of Lockheed Martin's revenues come from the U.S government, including 61% from the U.S Department of Defense. The U.S. government's current budget resolution keeps annual funding is available at last year's levels -- for now. Assuming the U.S budget cut in the Department of Defense will reflect a similar cut in Lockheed Martin's revenues, DOD cuts could take a 3.4% bite out of the company's top line during 2014.

Boeing's Defense, Space & Security business  segment accounted for 36% of its revenues in the past quarter. Therefore, a decrease of 5.6% in the Department of Defense's budget could reduce Boeing's revenues by roughly 2%, assuming all other things equal. This back-of-the-envelope calculation only provides a rough estimate for these companies' revenues changes in 2014.

Valuation
Now that we've considered these companies' current performance and potential revenue declines, let's take a closer look at their current valuations, and see whether these companies' stock prices are too high to purchase.

In order to examine these companies' valuation I will calculate their enterprise value and EV-to-EBIT ratios.

The table below presents the summary of data of all three companies and the average Aerospace/Defense industry.

The EV-to-EBIT ratio is a slightly more refined valuation measurement than P/E, because it considers these companies' different capital structures, including their level of debt and cash on hand.

All three companies have very different debt levels: Boeing's debt-to-equity ratio is 1.07;  Lockheed Martin's ratio is 4.82; Northrop Grumman's ratio is 0.63. These numbers show that Northrop Grumman is the least leveraged while Lockheed Martin is highly leveraged. In other words, Lockheed Martin's debt burden is high compared to the others, and this valuation measure accounts for the different debt levels these companies have. The annual EBIT is based on the past four quarters (ending in the third-quarter of 2013).

As you can see above, Boeing's EV-to-EBIT ratio is the highest at 14.32, which is higher than the industry average. Conversely, Northrop Grumman's ratio is the lowest of this group at 8.28. These findings, at face value, suggest that Boeing and Lockheed Martin aren't much of a bargain for their industry, particularly compared to Northrop Grumman.

In conclusion...
Leading defense companies are likely to see an additional drop in revenues in 2014. For a company such as Lockheed Martin, this could mean its revenues will dwindle further in the coming quarters. On the other hand, companies such as Boeing, which rely less on the U.S government's budget, won't suffer as much in 2014.

Finally, the recovery of these companies' stocks over the past several months may have made their valuation a bit high -- unless the U.S government winds up allocating more money for defense, instead of less.