Please ensure Javascript is enabled for purposes of website accessibility
Log In Help Join The Motley Fool
Free Article Join Over 1 Million Premium Members And Get More In-Depth Stock Guidance and Research
By Keith Speights - Jan 7, 2014 at 10:55AM

Think big insurers are pushovers for Obamacare? Here's why you might be right.

Have you ever tried to get your health insurance company to do something that it really didn't want to do? If you have, my guess is that it didn't go so well.

When it comes to the Affordable Care Act, commonly known as Obamacare, some health insurers appear to be pushovers. Typically, insurance companies require payment before a policy goes into effect. Not for Obamacare. If you have a Jan. 1 effective date, your first payment can be as late as Jan. 10. Big insurers including Aetna (AET) and Cigna (CI) acquiesced to the federal government's "request" for this grace period.

Why is it that when Obamacare says "jump," insurers ask "how high"? One picture provides the likely answer. 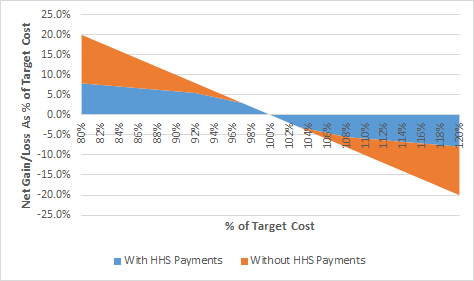 This picture illustrates how the "risk corridor" provision of Obamacare works. The health insurers that chose to participate in the health insurance exchanges have a not-so-silent business partner -- Uncle Sam.

Take WellPoint (ELV 1.64%), for example. The nation's second-largest health insurer stands out as one of the most vested in Obamacare, participating in exchanges in every state where the company operates. If WellPoint runs into steep medical costs that are 20% more than what is targeted, the company will actually only lose less than 8% thanks to the HHS risk corridor subsidy.

Insurers are willing to jump through nearly any hoop that Obamacare throws into their paths, because the government controls the purse strings to the risk corridor program. When President Obama announced that plans that had been canceled because of Obamacare's minimum benefits requirements could be reinstated, one of the first messages put out was that the risk corridor payments would be sweetened.

Of course, even the promise of extra money couldn't magically evaporate all of the significant issues with the last-minute change. Aetna was one big insurer that balked, stating that there simply wasn't enough time to clear all of the regulatory hurdles to reinstate the canceled policies.

With this limited downside from the risk corridor subsidies, is the business partnership with Uncle Sam a smart business move that rewards investors? Maybe not.

For one thing, we have only focused on the right side of the picture -- where medical costs are higher than the target amount. The problem for insurers is that their partner isn't just a giver -- he's a taker, too. If medical costs are too much lower than expected, insurance companies must pay the federal government a portion of their good fortune. That's above and beyond regular taxes on profits.

Also, losing money isn't a good thing for a business, regardless of whether or not that loss is cushioned somewhat. At least one analyst, UBS' A.J. Rice, predicts that WellPoint will lose around $236 million in 2014 because of Obamacare. Those losses could be even worse if the lower-than-expected enrollment experienced thus far results in fewer healthy Americans signing up for insurance.

This very concern kept the biggest health insurer in the country, UnitedHealth Group (UNH 0.83%), largely on the sidelines when it came time to participate in the Obamacare exchanges. CEO Stephen Hemsley warned that initial enrollees could have "a pent-up appetite" for medical care.

Some insurers might like the free money, but many Americans don't. A survey by Investors Business Daily found that 65% of respondents oppose a "federal bailout" of insurance companies that lose money because too few healthy individuals enroll in Obamacare plans. There could be considerable public pressure to limit the risk corridor program.

Even if not, the current risk corridor payments won't last forever. Obamacare phases them out in three years. In the meantime, health insurers could find out what children discover at an early age: You can get tired after jumping for a long time.

Fool contributor Keith Speights has no position in any stocks mentioned. The Motley Fool recommends UnitedHealth Group and WellPoint. The Motley Fool owns shares of WellPoint. Try any of our Foolish newsletter services free for 30 days. We Fools may not all hold the same opinions, but we all believe that considering a diverse range of insights makes us better investors. The Motley Fool has a disclosure policy.