Mark your calendar -- Apple earnings are just around the corner. Here are two key metrics to watch.

On Monday, Apple (AAPL 1.10%) announced the date of its fiscal first fiscal-quarter earnings date: Monday, January 27. Guiding for record revenue for the quarter ending at the close of the calendar year, Apple earnings show will be closely scrutinized by the Street. Though many metrics that Apple reports will be important, here are the two most essential metrics that will give investors a solid pulse on where Apple is headed: iPhone sales and gross profit margin.

1. iPhone sales
Though Apple's iPad business has quickly become important to its business results since the first iPad was launched in 2010, the segment still pales in comparison to the iPhone. In Apple's fourth quarter, the iPad (Apple's second-largest product segment) accounted for just 16.5% of Apple's business. Comparatively, the iPhone accounted for 52% of revenue.

But Apple's revenue breakdown doesn't even do enough justice to the iPhone's impact on its business. Asymco's Horace Dediu estimated in July that the iPhone segment has a gross profit margin of approximately 46%. That's significantly higher than Apple's overall gross profit margin of about 37.5%. As the company's most profitable business segment, iPhone unit sales have an outsized positive impact on Apple's bottom line.

So how many iPhones can we expect Apple to sell? In the year-ago quarter, Apple sold a whopping 47.8 million iPhones. Considering that Apple expects revenue during the quarter to increase only about 3.6% (using median number on Q1 revenue guidance), Apple is likely only expecting a marginal boost to iPhone sales, if any; management may have attributed the bullish estimate for a record revenue quarter to iPad sales. After all, Apple CEO Tim Cook said during the Q4 earnings call that he expected it to be an "iPad Christmas." 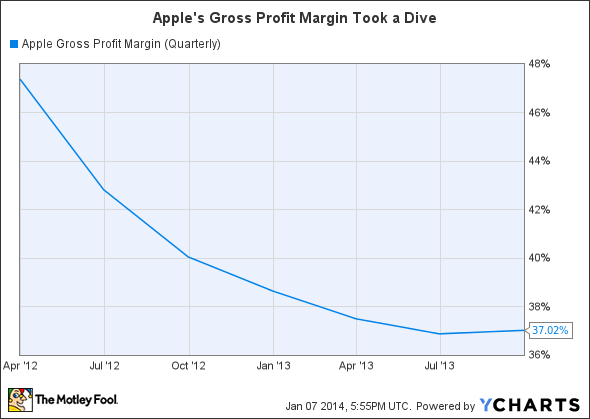 The culprit behind Apple's declining gross margin has been attributed to a large number of new products, an aggressively priced iPad Mini, and the iPhone 5's higher cost than the iPhone 4s. While Apple has said that it expects its cost curve to improve over time, a shift in iPad sales composition that relies heavily on the iPad Mini looks like it will have lasting effects on Apple's gross profit margin. And an October-released iPad Mini that finally boasts a Retina Display shouldn't help.

So investors certainly shouldn't expect Apple's gross profit margins to rebound to their peak levels, but they do look like they are stabilizing. Even more, they could begin inching upwards -- albeit very slowly.

Apple guided for a gross profit margin between 37.5% and 38.5% in Q1. The median for this guidance would come just 60 basis points lower than last year's 38.6%. That's a big year-over-year improvement compared to the fourth quarter's decline of 300 basis points.

Back to growth
Combining Apple's conservative valuation with its aggressive share repurchase program, it simply needs to grow the bottom line in line with inflation over the long haul to reward investors. That's why Apple's most crucial segment to bottom-line results along with the all important gross profit margin are such important indicators of Apple's potential -- Apple needs to return to bottom-line growth.

Though these two metrics are obviously important, it's also critical investors don't get too caught up in one quarter's results. Take the results with a grain of salt and simply consider it a pulse check on your long-term investment thesis for the stock.