The labor market gets a lift as the holiday season winds down.

Initial jobless claims fell 4.3% to 330,000 for the week ending Jan. 4, according to a Labor Department report released today.

After increasing a revised 1.2% the previous week, this newest report clocked in 1,000 claims below analyst expectations. 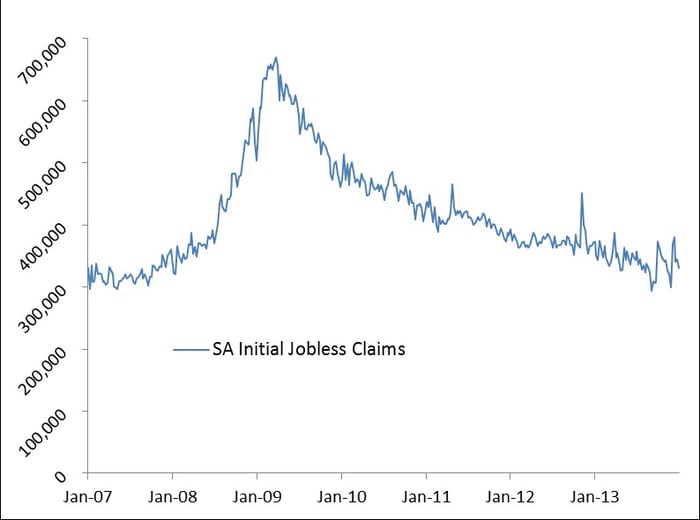 From a more long-term perspective, a 2.7% drop in the four-week moving average to 349,000 initial claims nearly reversed the previous week's revised 2.9% rise. Both the latest week's claims and the four-week average fall significantly below 400,000, a cutoff point that economists consider a sign of an improving labor market.

On a state-by-state basis, nine states recorded a decrease of more than 1,000 initial claims for the week ending Dec. 28 (most recent available data). California's claims dropped the most (14,640), due primarily to fewer layoffs in the services sector.

For the same period, 14 states registered increases of more than 1,000 initial claims. Michigan (plus 16,060) and Pennsylvania (plus 10,600) both recorded significant spikes as manufacturing layoffs took their toll.

While this latest report seems to bode well for the labor market, the holiday season is infamously volatile for jobless claims. Moving into January, analysts should gain a clearer idea of how employment is faring in the current economy. The government is set to release the December jobs report tomorrow.

You can follow Justin Loiseau on Twitter @TMFJLo and on Motley Fool CAPS @TMFJLo. Try any of our Foolish newsletter services free for 30 days. We Fools don't all hold the same opinions, but we all believe that considering a diverse range of insights makes us better investors. The Motley Fool has a disclosure policy.