It's been a pretty rough week for Novartis (NYSE:NVS).

The Swiss pharmaceutical giant was first sued by the New York Attorney General over alleged kickbacks. The next day, Japanese regulators launched a criminal investigation against the company over allegedly falsified research. 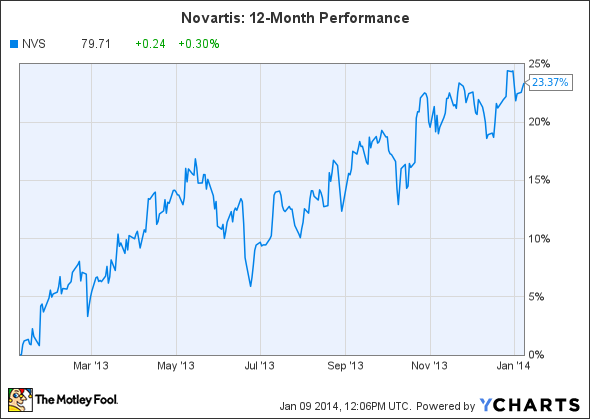 Let's take a closer look at three things -- the charges facing Novartis, how they relate to industry peers BioScrip (NASDAQ:OPCH), Merck (NYSE:MRK), GlaxoSmithKline (NYSE:GSK), and Biogen (NASDAQ:BIIB), and if these charges will affect the company's long-term prospects.

Kickback allegations in New York
On January 8, New York Attorney General Eric Schneiderman announced that his office was suing Novartis over a kickback scheme related to its iron-reduction drug Exjade.

Schneiderman's office alleges that Novartis entered an agreement with pharmacy and home health services provider BioScrip to cover the costs for excessive prescriptions of Exjade.

That agreement dated back to 2007, when Novartis became concerned that safety concerns regarding Exjade could cause sales to decline. The drug was found to possibly cause renal and hepatic impairment along with gastrointestinal hemorrhaging.

Novartis' agreement with BioScrip was intended to keep patients on the drug for as long as possible. BioScrip employees allegedly called Medicaid recipients in New York and other states to encourage them to refill their Exjade prescriptions or resume taking the drug.

Over the past three years, sales of Exjade have continued rising, albeit at a slower year-over-year rate:

Novartis was also hit by another health care fraud claim on the same day, filed by U.S. Attorney for the Southern District of New York Preet Bharara and others.

Despite the ethical issues at stake, these two cases shouldn't take a huge toll on Novartis' top line since Exjade only accounted for 3% of its revenue last year.

Bigger headaches in Japan
The recent developments in Japan, however, could be much more damaging.

On January 9, Japanese health regulators initiated a criminal investigation against Novartis, alleging that research regarding its top-selling high blood pressure drug Diovan was possibly falsified. Regulators also claimed that the falsified data had been knowingly used in advertisements.

These accusations are troubling for Novartis, which generated $4.4 billion in global sales of Diovan in fiscal 2012. Japan accounts for roughly a quarter of its global Diovan sales.

Diovan, which was once Novartis' top-selling drug, lost patent protection in Europe in 2011 and in the U.S. in 2012, but it has yet to be challenged by any generic competitors. When generic competition arrives, Novartis estimates the annual top-line impact to be as high as $2.3 billion. Even without generic competition, sales of Diovan have been dismal, posting a 28% year-over-year decline in fiscal 2012.

This isn't the first time a major pharmaceutical company has been hit by problems in Japan.

Last year, Merck and GlaxoSmithKline both reported a drop in sales of their respective HPV vaccines, Gardasil and Cervarix, after the Japanese government withdrew its recommendation for the use of the vaccines in young girls because of safety concerns.

However, the government stopped short of pressing criminal charges against Merck and GSK, as it has now done with Novartis.

The big picture
Although Novartis' problems in New York shouldn't cause investors much concern, the charges in Japan should.

If the investigation causes other countries to reexamine their approvals of Diovan, too, Novartis' forecast of $2.3 billion in losses from generic Diovan might need to be recalculated to include a sudden drop in Japanese sales.

Novartis' best hope for growth beyond Diovan and Gleevec is its orally administered multiple sclerosis drug Gilenya, which generated $1.2 billion in 2012 sales. Gilenya is expected to eventually hit annual peak sales of $2.8 billion.

Unfortunately, sales of Gilenya are also expected to be eroded by Biogen's rival drug, Tecfidera, which was approved in March 2013. Tecfidera has a milder side effect profile and is expected to be an even bigger blockbuster than Gilenya, with peak sales estimates of $3.8 billion.

The Foolish takeaway
It's doubtful the double whammy of bad news for Novartis will sink the stock.

However, the current charges could weigh down its top-line growth at a critical time. If sales of Diovan, Gleevec, and Gilenya all slip for the aforementioned reasons, Novartis could post mediocre growth in the year ahead.