America's oil boom is changing the game for our country. According to the International Energy Agency, the U.S. will surpass Russia and Saudi Arabia next year to become the world's top oil producer. Further, we're on pace to become energy self-sufficient. We have shale revolutionaries like EOG Resources Inc (EOG -3.75%) and Devon Energy Corp. (DVN -2.13%) to thank for that dramatic change of events.

As America's energy industry shifts into high gear, the question investors need to know is which of these top oil stocks will yield the best returns. Earlier this week, we covered the case for EOG Resources, but this time these two Fools take a closer look at the bull and bear case for Devon Energy.

Devon Energy by the numbers
Here's a quick snapshot of Devon Energy's most important numbers:


Tyler's bull case
If you haven't taken a look at Devon Energy recently, then you probably wouldn't recognize the company from a couple of years ago. Devon has gone from one of the first movers in the natural gas boom to quite possibly one of the best independent oil and gas companies in the U.S. today. And here's the best part about it: Nobody seems to be paying attention to this company that you can buy for a fraction of what you would pay for EOG Resources.

To best understand why Devon is in this position today, we need to take a quick look back to 2012. At the time, a majority of Devon's production was in natural gas from the Barnett Shale of East Texas. It was having great success there and in many other shale plays across the U.S. until prices for natural gas hit rock bottom in April of 2012. Benchmark prices such as Henry hub were trading below $2.00, and natural gas producers like Devon were really getting hit hard. Between 2012 and the beginning of 2013, the company took almost $4 billion in asset writedowns that killed any chance at making a profit.

From that setback came a new focus from management to back down on natural gas production and grow the oil assets on the books. Since then, it has made major strides in developing its acreage in the Permian Basin, made a $6 billion purchase for Eagle Ford-centric producer GeoSouthern, and has brought a large portion of its Canadian oil sands assets online. Today, the company has a 50/50 balance of liquids and gas production and is a strong player in two-thirds of the hottest oil shale plays in the U.S. and some extremely long-life projects up in Canada.

Despite this change in philosophy, a visible change in production mix, and a strong growth program in the Permian, Eagle Ford, and in Canada, the market hasn't seemed to catch on to these changes. The company currently trades at a price-to-tangible book value of only 1.7, which is well below both EOG and the industry average of 3.0 and 3.1, respectively. This is also reflected in the two's forward P/E ratio. Devon's estimated forward P/E is only 10.99 while EOG's and the industry average are 17.9 and 22.8, respectively.

What is even more astounding is that the company has a massive stash of cash on its balance sheets and many of those assets that got written down last year are most likely economical again even though they do not show up on the balance sheet.

On a company-to-company basis, I think that Devon is very close to being everything that EOG is. But when you look at the two stocks, Devon is dirt cheap and investors who think they may have missed the boat on America's energy boom should consider picking up Devon.

Matt's bear case
Tyler is right: Devon Energy is making all the right moves. It really is beginning to rival EOG Resources as a top oil-focused growth company. However, I do have a couple of concerns with Devon Energy. First, it gets a large portion of its oil from the Canadian oil sands. As the chart below shows, Canada is a big part of Devon's current oil production. 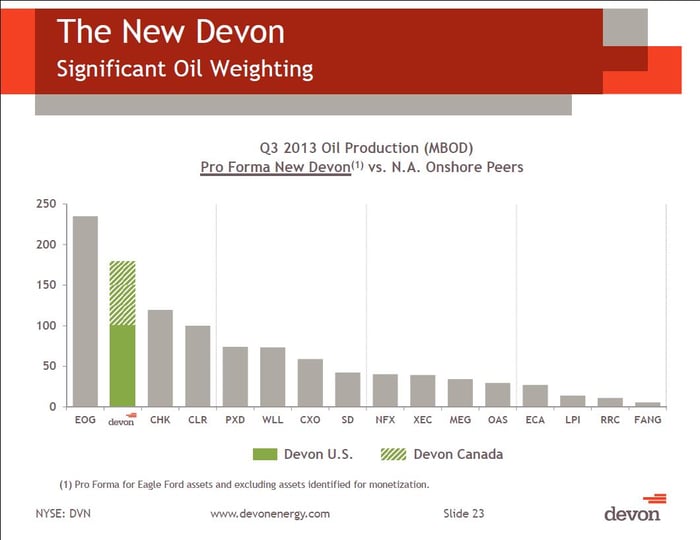 The lack of pipeline takeaway capacity coming out of Canada has pressured oil prices. While there are several pipeline projects in, well, the pipeline, these are proving to be difficult to gain regulatory approval. Pushback from environmental groups is having a real impact on the region and that doesn't appear to be letting up. One of the reasons why Devon could be selling for such a discount is because investors are pricing in more problems getting oil out of Canada.

The other concern I have with Devon is that a good portion of its liquids production is natural gas liquids and not oil. Overall, 20% of the company's total production is in NGLs, while that number is just 13% at EOG Resources. Looking at it another way, 39% of Devon's total liquids output is NGLs whereas just 23% of EOG's liquids production is NGLs. While NGLs are more valuable than natural gas, they are not nearly as high margin as oil. Further, these volumes also tend to be a bit more volatile and it's very difficult for producers to hedge against this volatility

Bottom line: Discounted Canadian oil, along with higher NGL volumes, is not exactly a dynamic combination.

Investor takeaway
Just as Matt noted, not all oil production is created equal. So investors should be aware where an individual company's oil and gas come from because it can be a huge indicator of the company's future. Fortunately for Devon, the price for Canadian oil sands has been improving and it got a 25% premium for its oil sands production over the Canadian oil price benchmarks in the past quarter.

So whose side are you on in this debate? Help us decide which stock is America's best in energy by voting on Twitter. Tweet EOG or DVN to @TMFEnergy for your choice and we'll post the results next week.

Fool contributors Matt DiLallo and Tyler Crowe have no position in any stocks mentioned. You can follow them on Twitter @MatthewDiLallo and @TylerCroweFool, respectively.

The Motley Fool owns shares of Devon Energy and EOG Resources. We Fools may not all hold the same opinions, but we all believe that considering a diverse range of insights makes us better investors. The Motley Fool has a disclosure policy.