Eli Lilly recently released a 2014 revenue forecast below levels not seen since early 2008. Find out if its five compounds under review at the FDA can stop the bleeding.

Last year was tough for pharmaceutical company Eli Lilly (LLY -5.61%). US patent expirations of Cymbalta in December 2013, and Evista this coming March are going to leave bruises. As a result, the company is expecting revenue for 2014 to fall between $19.2 and $19.8 billion, a level not seen in over 5 years. Its goal for 2014 net income has been set at just $3.0 billion, a serious reduction from present levels. 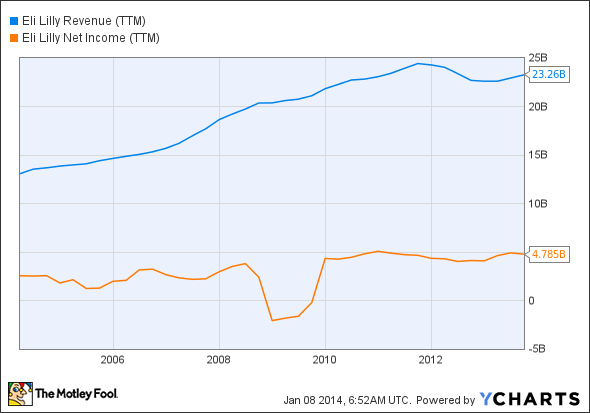 R&D Hubris?
In anticipation of their own patent cliffs, many of the big players reduced their R&D budgets, in an attempt to earn more with less. Around the same time, Lilly put the pedal to the floor. 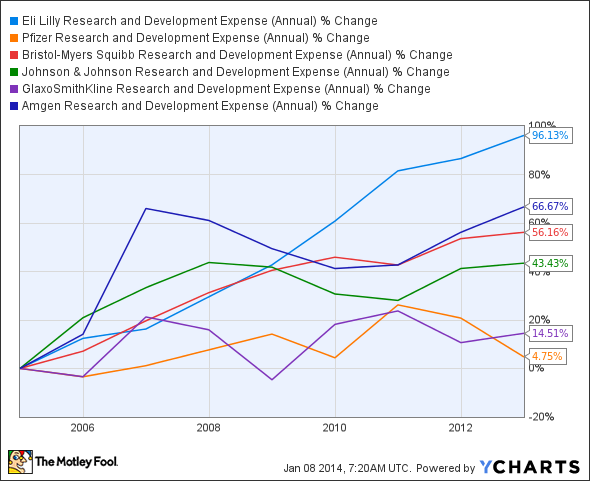 Please stay calm
Few will envy chairman, president, and CEO, John C. Lechleiter this year as he attempts to soothe anxious investors. From the earnings guidance released January 7, 2014, Lechleiter began with, "First and foremost, we are replenishing and advancing our pipeline. Today, we have 13 potential new medicines in Phase III testing or submission stage, with 26 more in Phase II. We anticipate obtaining regulatory approvals for and successfully launching multiple products each year for the next few years."

While Lilly's pipeline is robust, the company has some big holes to fill fast. Here's a look at some of the items currently under review by the FDA.

Ramucirumab
This monoclonal antibody, or MAB, is an receptor antagonist that blocks vascular endothelial growth factor. You could think of it as a cover that fits specifically over an "on" button. In this case, it fits over and blocks a specific molecular "button" that turns on machinery that, in turn, creates blood vessels to feed solid tumors. As such, it has implications for multiple types of cancer, which is great for Lilly because it failed to meet its primary endpoint in a Phase 3 breast cancer study last year.

Although the failure is definitely disheartening, it isn't time to give up hope on ramucirumab just yet. The drug has been the subject of Phase 3 trials for four separate indications beyond breast cancer, and the FDA is currently reviewing a new drug application, or NDA, for second-line monotherapy gastric cancer with a fast-track designation.

Empagliflozin
This is one of several next-generation diabetes treatments that inhibit the function of sodium-glucose co-transporter 2, or SGLT2, in the kidneys. Its inhibition by the drug lowers blood glucose levels as it is excreted through the patient's urine.

When it comes to new diabetes treatments, regulators are notoriously difficult to please. This usually leads to the expensive generation of piles of data. In August 2011, Bristol-Meyers Squibb (BMY 1.59%) and AstraZaneca learned this the hard way when an FDA advisory committee voted against approval of dapagliflozin, another SGLT2 inhibitor.

Both companies funneled even more resources into generating the data that the advisory panel requested. In December 2013, a second advisory committee voted strongly in favor of dapagliflozin's approval. This does not mean that the drug is approved, but according to a study by the McKinsey Center for Government, the FDA sides with positive advisory committee recommendations about 88% of the time.

Not alone
Should empagliflozin win approval, it's extremely likely to feel pressure from dapagliflozin, but that's not the only competitor. In March 2013, the FDA approved its first SGLT2 inhibitor for Type 2 diabetes. Johnson & Johnson (JNJ -0.47%) has already launched canagliflozin (Invokana) in the US. Johnson & Johnson hasn't released specific Invokana sales figures yet, but a survey of doctors by the BioTrends Research Group shows that endocrinologists aren't exactly jumping on the new treatment option.

Dulaglutide
Also in under review is Lilly's glucagon-like peptide-1, or GLP-1 analog, dulaglutide. Lilly will be competing with Novo Nordisk A/S (NVO -4.94%) and its GLP-1, Victoza.

If approved, a US launch of dulaglutide is also likely to face pressure from payers. The largest pharmacy benefit manager, Express Scripts has excluded Victoza from its 2014 National Preferred Formulary. Sales of Novo Nordisk's GLP-1 took off fast, but showed signs of slowing down in the second half of 2013. Unless it can show efficacy data far above Victoza, odds are Express Scripts will exclude it from its formulary as well.

Long-lasting insulin
In addition to the GLP-1 market, Lilly is also trying to force its way into the already saturated long-lasting insulin space. In December 2013, the FDA accepted an NDA for its insulin glargine product that, if approved, will compete with Sanofi's (SNY -2.67%) biggest seller, Lantus. The French giant's Lantus, loses patent protection in the US in February 2015. Sanofi has had some luck in Phase 3 trials with an updated version of Lantus, named U300. If Lilly's long-lasting insulin wins approval it could soon face competition with a generic version of Lantus, or the possibly more effective U300.

Don't give up
It seems that Lilly can't take a step forward without landing on a competitor's footprint. I still feel that what on the surface appears to be ineptitude is really just a string of bad luck. Late stage mishaps occur all too often in this industry, at no fault of the company developing them. If its Alzheimer's candidate, solanezumab, and ramucirumab's breast cancer indication had met their endpoints, everyone would now be cheering Lechleiter's R&D budget decisions.

It seems that even if Lilly wins approval for the drugs under review, the next couple of years are likely to be marked by continuing decreases in revenue. The company is still an R&D powerhouse, and could eventually become a great long-term buy, at the right price. Remember, Lilly still has eight compounds in Phase 3, and lists over 50 in earlier stages of development. But, none of those can stop the company's top line from receding in the near-term.