As if Tesla hasn't received enough accolades, the company has been recently recognized again -- this time for its rapidly expanding charging infrastructure.

At least that's what the panelists of AOL Auto's "Technology of the Year" award said. The technology "ran away with votes for the award, clearly surpassing all of the other contenders." It would be tough to argue otherwise; the rapidly expanding network of electric-car charging stations for Tesla's (TSLA -0.89%) vehicles is purposed to upend an antiquated industry. Tesla's mission is "to accelerate the advent of sustainable transport by brining compelling mass market electric cars to market as soon as possible" -- and its rapid expansion of its charging network shows just how seriously it's taking this mission.

Tesla's innovation in its Supercharger network, however, goes beyond a fast charge. The company is piloting battery swapping at some of its Supercharger stations. The technology allows owners to swap out their used battery for a fully charged battery in less than 90 seconds -- all without getting out of the vehicle. Notably, Tesla may charge some owners a nominal fee for the swap, and they will eventually have to return for their original battery.

The expansion
But the network is of very little help if a station isn't located within driving range.

"There's simply no way the average consumer is going to consider putting an electric vehicle in their garage if there's no way to refuel it on the go," managing editor of Autoblog Jeremy Korzeniewski told AOL.

But acknowledging Tesla's expansion that's already under way, Korzeniewski admitted, "If Tesla is able to continue rolling out long stretches of Superchargers, EVs will finally have the level playing ground that they need in order to have a chance at succeeding."

Indeed, Tesla is rapidly rolling out its network. In fact, a cross-country drive is already nearly feasible based on this open-source map that's tracking the U.S. expansion of Tesla's charging stations. 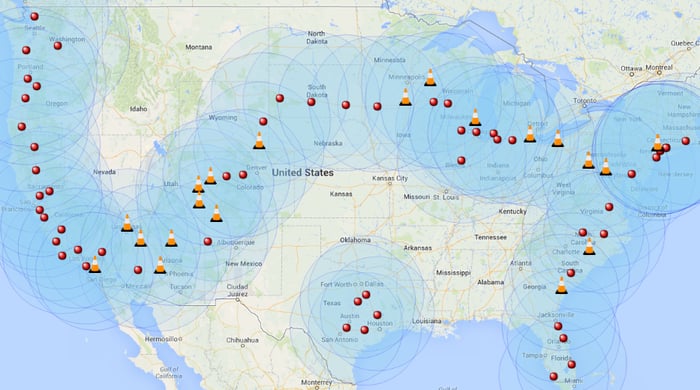 Changing the industry
Though there are plenty of critics betting against Tesla's planned attempt to launch an affordable electric car that can sell hundreds of thousands of units per year, the company is building charging stations as if it is certain that it will play a major role in the auto market in the future. The charging infrastructure will be in place before 2016 or 2017, the estimated time that Tesla has planned for the launch for its affordable electric car.

Tesla's aggressiveness in its global expansion plans should comfort shareholders. Trading at about 10 times sales, the company is going to need major growth to grow into its valuation. And a rapidly growing Supercharging network is laying the foundation for that potential growth.

AOL is right; the network changes the game. AOL Auto's mulimedia director, Adam Morath, sums the technology up eloquently: "With the Supercharger, Tesla is tackling the tired arguments against the electrification of the automobile head on by addressing range, charge times, charger accessibility and clean energy production (the Supercharger is powered by solar energy, not coal) all in one stroke."