Please ensure Javascript is enabled for purposes of website accessibility
Log In Help Join The Motley Fool
Free Article Join Over 1 Million Premium Members And Get More In-Depth Stock Guidance and Research
By Dan Moskowitz - Jan 11, 2014 at 7:25AM

Home automation recently became a lot more affordable. This could be a bullish sign for Lowe’s and Home Depot. However, a significant risk exists.

Lowe's (LOW 0.97%) might not often be thought of as an innovative company. Most consumers see it as a place to go for home improvements, especially if a Lowe's location is more convenient than a Home Depot (HD 0.82%) location.

Lowe's and Home Depot might be competitors, but they're both likely to be long-term winners, and they're both more innovative than most people realize. There are many different innovative avenues to explore for Lowe's and Home Depot, but this article will primarily focus on Lowe's Iris system, which rolled out in 2012 with 40 home-automated products.

That number is going to expand exponentially over the next few years. And Lowe's recently announced key developments at the Consumer Electronics Show in Las Vegas. We'll take a look at the most important announcements, and of course, whether or not Lowe's appears to have an edge over its biggest rival.

Vocal commands
Do you ever talk to yourself while home alone? If so, while you would probably like some form of response, nothing ever happens. Sorry, but the walls don't talk back. However, due to recent innovations, including Lowe's iVee voice-control unit, the walls will now listen to your commands. For instance, if you feel as though it's too hot in your house during the summertime, you can say, "Turn air down to 64."

That's a neat feature, but it's not the biggest selling point for home automation. The biggest selling point is energy savings. If you're an environmentalist, then there's an additional reason to look into home automation, but for most people, it's all about saving money. The best part is that you don't have to do much. For example, smart energy meters will view and manage your power usage; if there's a leak in the home, the water valve will shut off automatically; and algorithms will monitor appliances to reduce energy costs when these items are not in use.

Lowe's believes that in the future, every electrical device it sells will be Internet-ready and controlled by an app. In the past, this wouldn't have been possible because home automation was too expensive. Thanks to significantly reduced costs, industry analysts now believe that the home-automation market will grow 47% annually over the next four years. If this proves to be true, then it will benefit Lowe's, Home Depot, and Time Warner Cable (NYSE: TWC).

Lowe's Iris sells for $179 and comes with free monthly service. Home Depot sells a packaged version of home-automation products and services for $69.88. And Time Warner Cable's IntelligentHome system begins at $33.99 per month. Most consumers don't like to be locked into contract deals, which is a potential negative for Time Warner Cable. On the other hand, Time Warner Cable has millions of customers to target for an added service.

While Time Warner Cable has potential to steal home-automation market share from Lowe's and Home Depot, let's stick to Lowe's versus Home Depot comparisons. There's a trend unrelated to home automation that is likely to impact both companies -- if the trend continues.

Housing-market impact
According to Bankrate.com, the 30-year fixed mortgage rate just dropped to 4.6% from nearly 4.7% in the previous week. This appears to be a positive, as lower mortgage costs leaves more available spending money for homeowners. However, if you look at the longer-term trend, there is reason for concern.

If you compare today's 30-year fixed to the 30-year fixed on May 1, 2013, you will notice quite a difference. At that time, the 30-year fixed stood at 3.5%. If this long-term trend remains intact, then it's going to lead to fewer spending dollars for home improvements, which will negatively impact Lowe's and Home Depot.

Assuming the 30-year fixed remains in-check, or if you're going to ignore this factor, then it should be noted that Lowe's has lagged Home Depot on the top line over the past year: 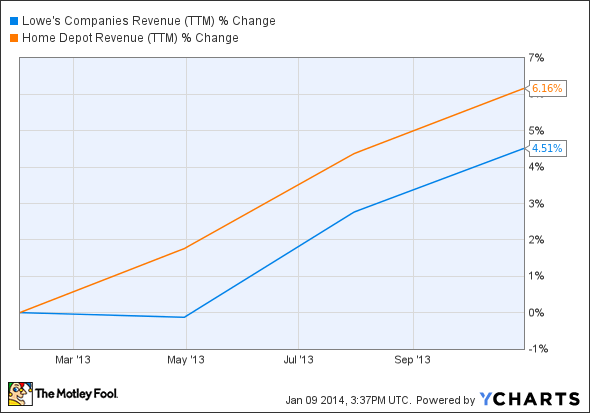 The bottom line
Advancements in home automation coinciding with reduced costs for this technology has the potential to lead to significant top-line growth for both Lowe's and Home Depot. Based on exposures to this technology and key metrics, choosing one company over the other would be splitting hairs. Unfortunately, if the 30-year fixed continues its slow and steady ascent and homeowners have less spending money available, this trend will offset any technological advancements for home automation.

Dan Moskowitz has no position in any stocks mentioned. The Motley Fool recommends Home Depot. Try any of our Foolish newsletter services free for 30 days. We Fools may not all hold the same opinions, but we all believe that considering a diverse range of insights makes us better investors. The Motley Fool has a disclosure policy.