Disney and Comcast are both successful entertainment stories, but Disney continues to edge out all competitors.

Disney (DIS -0.01%) seems to be winning everywhere. Its hit fairytale movie, Frozen, has been a huge success, having grossed a total of $248 million in the United States, ($515.3 million worldwide), based on a $150 million budget. Perhaps more amazing is that Frozen still has momentum. Over the December 27-29 weekend, the movie grossed $28.5 million, a 45.6% increase over the previous weekend.

To Foolish investors who follow Disney, there's a decent chance you're already aware of its recent box-office success. What you might not know is that Disney is also succeeding at another box office.

In 2012, The Lion King passed Phantom of the Opera as the highest grossing Broadway show of all time. In October of 2013, The Lion King surpassed $1 billion in historical sales. In addition, it was the top performer at the Broadway box office in 2013, with $96.9 million in box-office receipts, barely squeaking by Wicked, which brings us to another conversation.

Many people don't know how Wicked ended up becoming a Broadway show. In 1995, Marc Platt read the Gregory Macguire novel: Wicked: The Life and Times of the Wicked Witch of the West. Marc Platt was President of Universal Studios at the time, and he was thinking of how to make the book a movie, but big-screen script adaptations weren't good enough.

He was later approached by Stephen Schwartz, a composer and lyricist. His idea was to turn it into a Broadway show. All film ideas were dropped, they shortened the title to Wicked, and the rest is history.

Marc Platt stated there will be a Wicked movie, and that it's likely to happen sooner rather than later. Rumors are that Platt wanted to wait for Broadway earnings to fall off, but that might no longer be the case, especially given the success of Les Miserables. Les Miserables had a domestic box office movie gross of $148.8 million and a global total gross of $441.8 million. These numbers are impressive given the film had a budget of $61 million.

Anyone in their right mind would be eager to turn Wicked into a movie, especially given its Broadway success. If this comes to fruition, it would likely produce a significant revenue stream for Universal Studios (also known as Universal Pictures), which would benefit Comcast.

The Foolish takeaway
Both Disney and Comcast have rewarded its investors over the years. They're not only entertainment gurus, but they both excel at building brands that can be stretched to maximize potential. There might be some bumps in the road, but historically, Disney and Comcast have always bounced back. Consider total shareholder return performance (stock appreciation plus dividend payments) over the past decade for both companies: 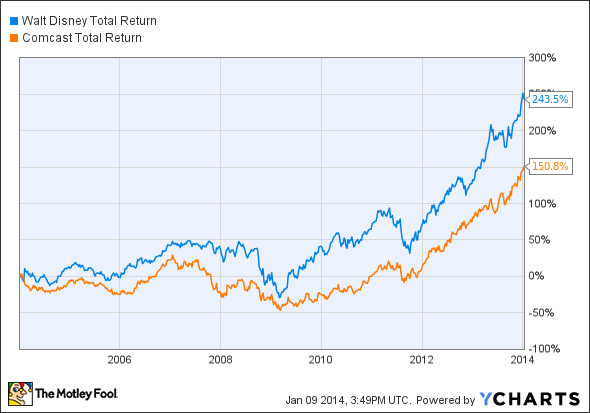 Both companies are impressive, but Disney proves to be a dominating force. However, if you're simply looking for a resilient company that pays a dividend, Comcast currently yields 1.50%, whereas Disney yields 1.10%. Both are worth a closer look by Foolish investors willing to do their own research.