Please ensure Javascript is enabled for purposes of website accessibility
Log In Help Join The Motley Fool
Free Article Join Over 1 Million Premium Members And Get More In-Depth Stock Guidance and Research
By Dan Moskowitz – Jan 11, 2014 at 7:00AM

However, while this news has been loud and hitting many news feeds across the Internet, Kellogg (K 0.40%) has quietly made its own moves, and these moves are likely to have more of an impact than General Mills removing GMOs from Cheerios.

Healthier cereals
Kellogg is best known for its cereals, and it should be since it's the largest cereal company in the world. That being the case, let's begin with innovations to its biggest category. Kellogg's new cereal products include Frosted Mini-Wheats Touch of Fruit Raisin (combines whole grain and fiber), Krave S'Mores (graham-flavored whole grain cereal shells add a nutritious touch to a chocolate and marshmallow center), and Kashi Organic Promise Raisin Vineyard (rice and wheat to go along with raisins).

Kellogg is slowly adjusting its cereal brands to target more health-conscious consumers, which will put it more on-trend than in the past. These innovative measures have the potential to increase demand, which would then help fuel the top line and likely lead to stock appreciation. Even if the results are subpar or ho-hum, Kellogg is consistently profitable and returns capital to its shareholders.

More convenience
Many consumer-goods companies are innovating to cater to today's health-conscious consumer, but only some of them are focusing on convenience at the same time. Kellogg has realized that today's consumer isn't just more health conscious but much more demanding than in the past. Today's consumer is pressed for time, and it wants what it wants as fast as possible. If a company can't deliver on this angle, then the consumer will look elsewhere, which will lead to a company losing market share to its peers. Fortunately, this isn't likely to happen to Kellogg.

If you look at Kellogg's recent frozen-product innovations, you're likely to be impressed. The most interesting innovation is Eggo Bites Waffles. These come in pouches and can be placed in the microwave, and then eaten anywhere, away from the table. Your first thought might be: "What about the syrup?" But that's the best part of this innovation: it's maple flavored and no syrup is required. Kellogg's Special K Bacon Egg and Cheese Flatbread is also convenient, targeting breakfast-on-the-go consumers as it's ready to eat after 90 seconds in the microwave.

Now let's see how Kellogg stacks up against General Mills and Post Holdings (POST -1.00%) from an investing standpoint.

Kellogg vs. peers
It's already clear that Kellogg is innovating to put itself more on-trend. And please note that the above innovations are only a few examples of what Kellogg has accomplished recently. Other innovative products include, but are not limited to, Kellogg's To Go Morning Biscuits and Special K Indulgent Moments.

Over the past year, General Mills has outperformed Kellogg and Post Holdings on the top line: 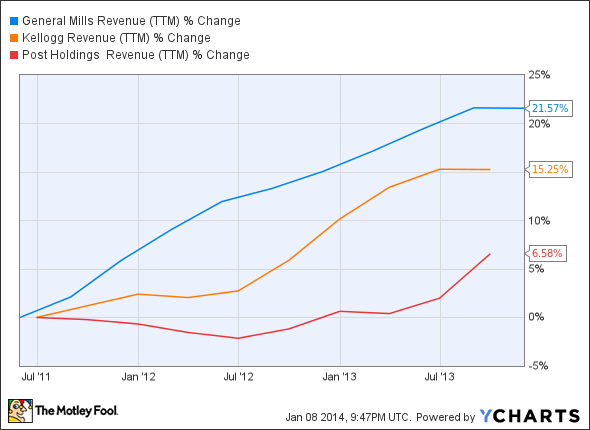 It's possible that Kellogg's recent product changes will increase demand and make this chart look different one year from now, but nothing is guaranteed. What is most interesting about this chart is that despite Post Holdings being the weakest top-line performer (relatively speaking), its stock has performed the best, seeing stock appreciation of 43% over the past year, while shares of General Mills and Kellogg have appreciated 20% and 9%, respectively.

Post Holdings' stock has performed well since going public in February 2012, after being spun off from Ralcorp (now under ConAgra Foods). This strong performance appears to be justifiable, especially since Post Holdings' product portfolio is primarily focused on nourishment, whole grains, protein, vitamins, and minerals, which targets today's health-conscious consumer very well.

Being that Post Holdings went public in 2012, we also don't know how resilient it would be in difficult stock market environments. We do know that Kellogg and General Mills hold up relatively well during these unfortunate times.

The Foolish takeaway
General Mills and Kellogg are both financially sound companies that are still growing. Future growth is likely given their abilities to innovate off core brands to better target today's health-conscious consumer. Historically, I have always given a slight edge to General Mills, but based on recent innovations, I would now give a slight edge to Kellogg. That said, they're both highly likely to be long-term winners, and owning them should come without much worry. Please do your own due diligence prior to making any investment decisions.