But few of us can invest in every single dividend-paying stock on the market, and even if we could, we're likely to find better gains by being selective. Today, two of the world's largest data-focused technology companies will square off in a head-to-head battle to determine which offers a better dividend for your portfolio.

Founded in 1979, EMC (NYSE:EMC) is the world's largest provider of data-storage systems. It serves global clients through facilities and partners around the world, with a roster of client businesses and service providers that include banks, government agencies, and ISPs. Headquartered in Hopkinton, Massachusetts, EMC runs manufacturing facilities in North America and Ireland, and has R&D centers in South America, Europe, China, and Asia. It employs more than 60,000 people and boasts over 400 sales and marketing offices in 86 countries worldwide.

Established in 1911, IBM (NYSE:IBM) is the world's largest technology company, and is the second most-valuable global brand. It is ranked among the top 20 companies on the Global Fortune 100 list, and is a component of the Dow Jones Industrial Average. Headquartered in Armonk, New York, the company has over 450,000 employees and 12 research laboratories, with a presence in more than 170 countries across the world. IBM may well be the world's oldest tech company as it has been developing cutting-edge technology for more than a century. Over the past decade, the company has streamlined its business portfolio to focus on high-growth segments such as its Smarter Planet initiative, data analytics, and cloud computing services.

Round one: endurance (dividend-paying streak)
IBM has been one of the favorite dividend stocks of long-term investors, as it started paying dividends in 1913 before switching from annual to quarterly shareholder distributions in 1916, and it has been paying ever since. By contrast, EMC began paying dividends in 2013. IBM takes the lead without a problem here. 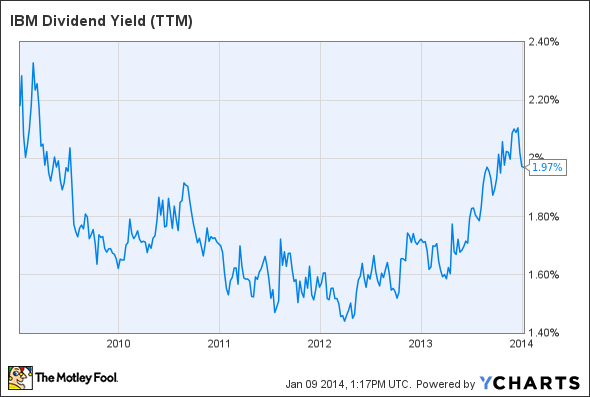 EMC's current yield is too recent to show up here, but at 1.6%, it's not enough to beat IBM. 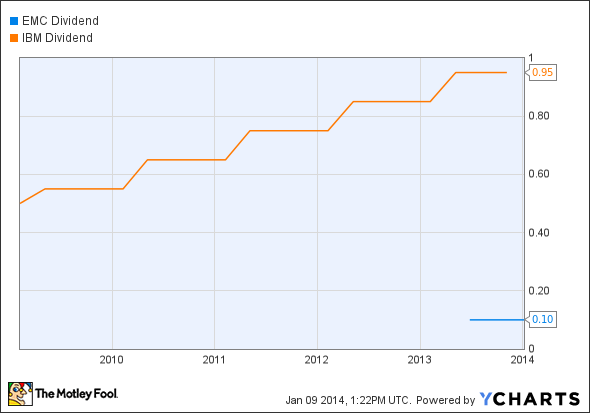 EMC started from zero, which is always a stronger increase than from high payouts to higher payouts, but it will have to raise its dividend in a big way this year to keep that progress going. 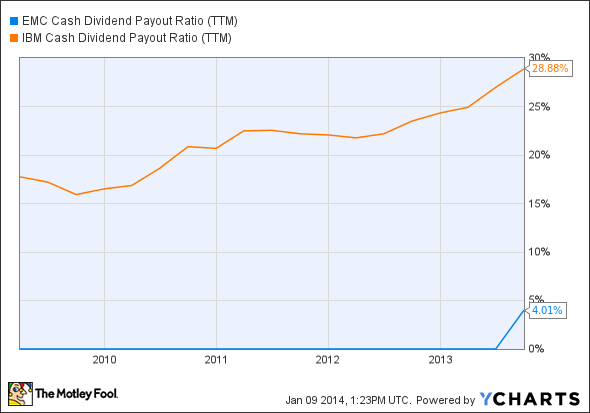 Bonus round: opportunities and threats
IBM may have won the best-of-five on the basis of its history, but investors should never base their decisions on past performance alone. Tomorrow might bring a far different business environment, so it's important to also examine each company's potential, whether it happens to be nearly boundless or constrained too tightly for growth.

One dividend to rule them all
In this writer's humble opinion, it seems that IBM has a better shot at long-term outperformance, thanks to consistent innovation and superior long-term performance. IBM has been diversifying away from its traditional offerings into next-gen technologies, but it could face strong headwinds from a number of companies that are already making serious moves into these fields. EMC continues to benefit from the rising demand for video bandwidth and data storage capacity, and it has also been scaling up its exposure into cloud-computing and data analytics services. However, these areas are becoming increasingly commoditized, and the world's largest tech companies (including IBM) seem intent on gaining footholds. You might disagree, and if so, you're encouraged to share your viewpoint in the comments below. No dividend is completely perfect, but some are bound to produce better results than others. Keep your eyes open -- you never know where you might find the next great dividend stock!