The symbolic start to the earnings season kicked off with a disappointing set of earnings from aluminum and alumina producer Alcoa (NYSE:AA). The company always provides useful end market guidance for the industrial sector, and this time around it produced a mix of good and bad news.

The first notable aspect of its outlook is that Alcoa is relatively less dependent on China this year. This is a due to a combination of three factors. First, China's industrial growth appears to be moderating. Second, North American growth is picking up. And third, European growth is somewhat stabilizing as the region starts to come up against some weak comparables from previous years.

Aerospace and automotive
These two sectors were the powerhouse of the industrial sector last year. According to Alcoa's management, growth will remain strong this year as well. The International Air Traffic Association (IATA) recently gave its aerospace industry outlook for 2014, and the forecast is for a strong increase in North American airline profitability. This is good news for Boeing (NYSE:BA) and Airbus. Moreover, along with the IATA, Alcoa made some bullish noises about future regional and business jet demand. This is a good sign for the global economy, because demand for these types of jets tends to be more cyclical. With passenger load factors (airplane capacity utilization) forecast to grow, Airbus and Boeing can expect orders to remain strong in 2014.

Unlike 2013, automotive growth is expected to be positive in each region for 2014 (though there are some warning signs in North America). On the recent conference call, Alcoa's CEO Klaus Klienfeld outlined that U.S. automotive production levels were now at almost pre-recession levels, but car inventories were 14% higher than last year. Consequently, automakers have pushed up incentives by 8%. This is a slightly worrying indicator, but with ongoing gains in employment in the U.S. and greater availability of credit it's unlikely to prove a lasting effect.

Meanwhile, growth in the automobile sector in China remains strong. 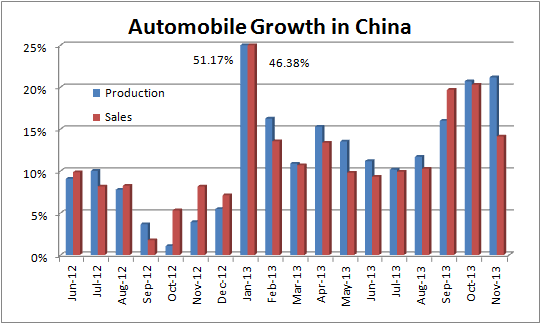 Two companies set to do well, and one that could disappoint
Paintings and coatings company PPG Industries (NYSE:PPG) and seeing machines company Cognex (NASDAQ:CGNX) both look set to do well, if Alcoa's report is a useful guide. PPG's industrial coatings business has heavy exposure to the aerospace and automotive sectors, and the company looks set to continue to benefit from favorable end markets in 2014. In fact, PPG even did well with European automotive manufacturers in 2013, because its management believes its clients were those doing relatively well in a down market. Given that European car production is expected to be better overall this year, PPG should do well. In addition, Alcoa expects the North American commercial building and construction market to improve by 3% to 4%, and this is good news for PPG's paintings division.

One of Cognex's aims for 2014 is to expand its sales outside its core automotive sector and into areas such as pharmaceuticals, consumer products, and the food and beverage industry. The company specializes in seeing machine systems that monitor automated processes. Given that China's automotive sector is expected to remain strong and areas like beverage can packaging are forecast to grow at 8% to 12%, opportunities for Cognex to expand its industry reach should remain significant in 2014.

There was disappointing news for General Electric (NYSE:GE) shareholders in Allcoa's report, however. Allcoa's management forecast a 8% to 12% decline in industrial gas turbines. Quoting from the conference call, Alcoa's management said:

In Europe, gas fired power generation is squeezed between low priced coal and subsidized renewals. In the U.S., gas prices have increased and this has allowed coal to claw back some of the share gains. Gas now stands in terms of energy production share here in the U.S. at 27.8 versus 30.4 in 2012

Indeed, GE reported that it only took 27 heavy duty gas turbine orders in its third quarter versus a year ago, while delivering 22 versus 35 last year. In addition, if gas turbines are being utilized relatively less, then GE's service orders to the industry should also decrease. Gas turbine revenue is a large part of GE's power & water division, which has generated nearly 29% of GE's industrial profits so far in 2013.

The bottom line
In conclusion, it was a mixed outlook with the main disappointment coming from the industrial gas turbine outlook. However, Europe looks set to improve, and North American industrial growth prospects look solid. China is subject to uncertainty this year, but Alcoa continues to give a positive reading on the country. Aerospace and automotive demand remains strong, and prospects look good for U.S. commercial construction.