SodaStream (NASDAQ:SODA) crashed by a whopping 25% on Monday after the company lowered its guidance for the fourth quarter. The stock is down more than 50% from its highs of 2013 and looking attractively valued from a historical point of view. On the other hand, there are valid reasons for concern regarding the future of the company and its ability to sustain profitability. Should you buy the dip in SodaStream?

The disappointment
The company announced that sales during the fourth quarter came in at $562 million versus previous guidance of $567 million. Earnings were particularly disappointing; adjusted net income for the quarter was $52.5 million versus prior expectations of $65 million, and GAAP net income came in at $41.5 million in comparison to a previous forecast of $54 million.

According to CEO Daniel Birnbaum, "These preliminary results reflect a challenging holiday selling season in the U.S. and several factors, mostly from the second half of the quarter that negatively affected our gross margin. These include lower sell-in prices and higher product costs, a shift in product mix versus plan, and unfavorable changes in foreign currency exchange rates."

Management elaborated on the causes of the reduced guidance during the ICR XChange Conference on Tuesday. Pricing discounts and a higher participation of machines in the sales mix had a negative effect on margins during the quarter. Increased operational and logistical costs as well as currency headwinds due to a strengthening Israeli shekel were also signaled as causes for the disappointing performance.

Even if headwinds are expected to remain present in the coming quarters, the company is still optimistic about its prospects in the middle and long term. Management believes the factors behind the recent missteps are "temporary and they are 100% addressable with process improvements," says Chief Development Officer Yonah Lloyd.

The meaning
The retail industry has been remarkably challenging lately, and many companies are reporting lower-than-expected sales and margins during the key holiday season because of the harshly competitive environment. Still, considering that SodaStream has a unique and innovative product, the company could be expected to maintain higher-than-average pricing power. This doesn't seem to be the case in recent months, though.

SodaStream operates under the razor-and-blade model, selling the machines at low margins and generating most of its profitability from flavors and carbonators. As long as higher-than-planned machines sales are a reliable indication of growing renewables sales in the future, a high proportion of machines sales in the last quarter should not be a problem from a long-term point of view.

Currency fluctuations are, of course, outside the company's control, but higher-than-expected logistical and operational expenses leave plenty to be desired in terms of efficiency and ability to execute.

Investors will need to wait for the full earnings release and conference call to make a more complete evaluation about the recent setback and management's strategy to overcome the company's difficulties.

However, this does not seem like a purely temporary problem due to outside forces like economic headwinds and currency fluctuations. The company is not delivering as expected, and that is a valid reason for concern.

The opportunity
For a company that is still growing its sales at 24% year over year, SodaStream looks attractively valued with its P/E ratio near 16.5. From a historical point of view, the company is trading at the low end of its valuation range over the last few years. 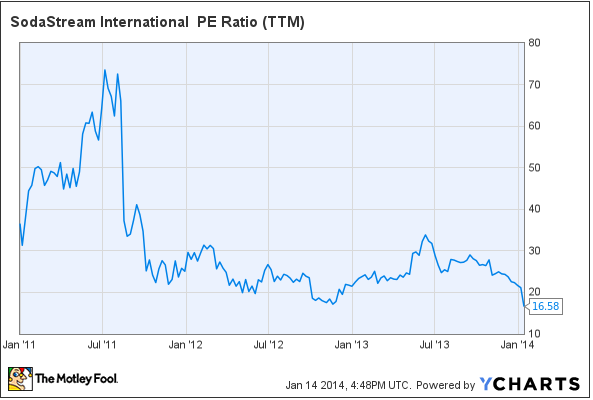 None of this matters if the company does not sustain its growth and profitability levels in the coming years. But valuation shows that SodaStream is providing plenty of upside potential from current levels if management can in fact bring the company back on the right track.

Bottom line
It's still early to tell if the recent disappointment from SodaStream is only a bump in the road to long-term growth or a sign of tougher times to come. There are good reasons for concern regarding margins, but as long as the company continues delivering healthy growth rates in sales, the long-term investment thesis still has a good chance of playing out.

Being a shareholder in the company, I'm not planning to increase my position until there is more visibility, but I would not rush into selling at this stage, either. For investors with a high risk tolerance who are willing to buy at currently depressed levels, caution when it comes to position size sounds like a good idea in order to keep the risks at bay.

SodaStream: Should You Buy After the Recent Crash? @themotleyfool #stocks $SODA Next Article
Current