Please ensure Javascript is enabled for purposes of website accessibility
Log In Help Join The Motley Fool
Free Article Join Over 1 Million Premium Members And Get More In-Depth Stock Guidance and Research
By Adam Levine-Weinberg - Jan 14, 2014 at 10:29AM

Why have bears been fleeing their short positions in Hawaiian Holdings, causing the stock to rocket higher?

Back in October, I highlighted Hawaiian Holdings (HA 1.81%) as a potential short-squeeze candidate. Tons of investors had shorted the stock even though the company's outlook was improving. This created a potentially explosive situation; if positive news about the company were to drive shorts to close their positions all at once, the surge in demand could send the stock flying higher.

Sure enough, a classic short squeeze has played out over the last three months or so. However, with Hawaiian's short interest finally approaching more normal levels, this big short squeeze is winding down. For the company to continue posting market-beating returns, it will need to show investors that its profit-improvement initiatives are taking hold. 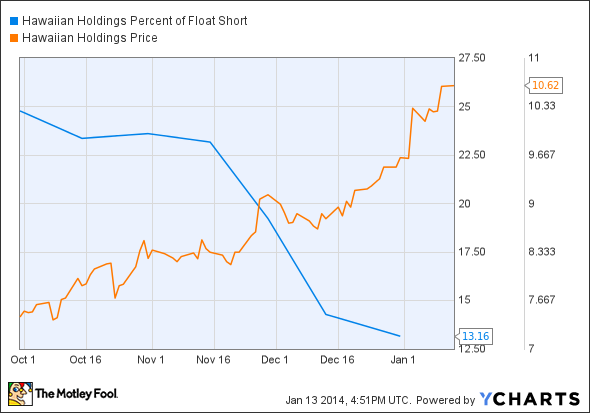 As investors who shorted Hawaiian Holdings rushed to cut their losses, trading volume surged (a typical side effect of short squeezes). Recently, there have been several days when 1.5 million-2.5 million shares changed hands, double or triple a typical day's activity. 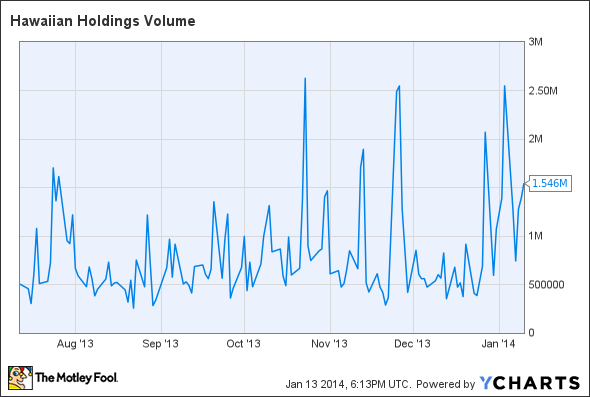 Volume has remained high in the first two weeks of January. This suggests that short interest has continued to drop since December 31 (the most recent date for which short data have been reported). As a result, short interest in Hawaiian Holdings is probably approaching a more normal level below 10% of the total share count.

Skies clearing
There were two substantive events in late October that catalyzed the ongoing rally in Hawaiian Holdings stock. First, the company projected solid unit revenue growth of 2.5%-5.5% for the recently ended fourth quarter. That has led analysts to predict a significant year-over-year jump in Q4 earnings.

Second, at its annual investor day, Hawaiian unveiled several initiatives to boost unit revenue. The company is slowing its growth to allow new routes to mature, it has implemented a new revenue management system, and it is pursuing new ancillary revenue streams.

The most promising ancillary revenue opportunity is the introduction of "Extra Comfort" seating on Hawaiian's Airbus A330s. This will be the carrier's first true premium economy product, and will include five extra inches of legroom, priority boarding, in-seat power outlets, and complimentary access to all of the content on Hawaiian's seat-back TVs. Extra Comfort seats will be available as an upgrade to regular economy tickets for $60-$100 one way.

What's next?
A few pieces of good news set Hawaiian Holdings stock on an upward trajectory in October, and excessive short interest added a ton of momentum to its move. However, further share price appreciation may not be so easy to achieve.

The unit revenue initiatives described above should help boost the company's profit margin over time, but the biggest impact may not be felt until late 2014 and 2015 (for example, the "Extra Comfort" product will not be rolled out until Aug, 1). On the flip side, unfavorable currency fluctuations will be a continuing drag on international unit revenue this year, based on recent exchange rates.

Nevertheless, the long term outlook for Hawaiian Holdings is bright. The company's domestic business is as strong as ever, and over the next few years, Hawaiian should be able to improve its international results as it better learns the nuances of each market. Meanwhile, it trades at a very reasonable valuation: less than nine times expected 2014 earnings. This provides a solid framework for market-beating, long-term performance.

Fool contributor Adam Levine-Weinberg owns shares of Hawaiian Holdings and is long April 2014 $8 calls on Hawaiian Holdings. The Motley Fool has no position in any of the stocks mentioned. Try any of our Foolish newsletter services free for 30 days. We Fools may not all hold the same opinions, but we all believe that considering a diverse range of insights makes us better investors. The Motley Fool has a disclosure policy.