Even after the amazing 2013 rally, the social network company has plenty of growth catalysts left.

Facebook (META 1.70%) had a great year in 2013, with shares going up more than 100% in the past 12 months. After a controversial initial public offering, the company eventually managed to prove itself as a genuine revenue-generating machine, with mobile advertising generating nearly $900 million in revenue in the third quarter of 2013.

After the amazing one-year rally, investors still interested in the social network should consider how much upside potential is left. The market for online advertising is extremely competitive, with Google (GOOGL 2.39%) and Yahoo! (NASDAQ: YHOO) making serious efforts to capture market share. Given this environment, will Facebook be able to grow fast enough to surpass investors' high expectations this year? 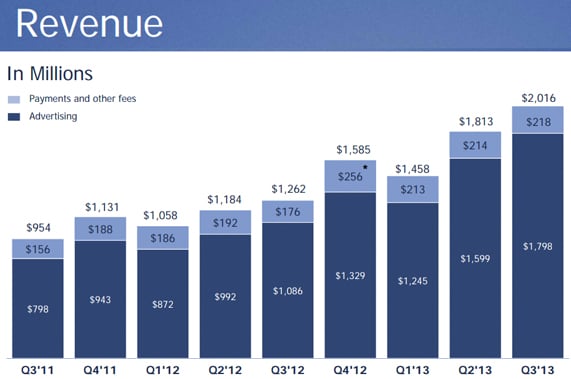 Plenty of growth catalysts left
Facebook still has plenty of room for growth left, both in terms of user metrics and revenue. According to eMarketer, the company only accounts for 16% of the world's total mobile ad revenue, well below Google's 52%.

From the user metric perspective, the company recently posted impressive user base growth across various geographies. And in the latest quarter, Facebook increased its monthly active user metric by 18% from the year-ago period.

Connecting the entire world
But for Mark Zuckerberg, this may be just the beginning. He has ambitions to connect many more people, as shown by Facebook's Internet.org initiative, which aims to promote technologies, establish partnerships with local operators, and try new business models that effectively reduce the cost of Internet access. The objective? Make Internet available to the two-thirds of the world not yet connected, and by doing so, increase the size of Facebook's potential user base.

Facebook's video strategy allows advertisers to reach a broader audience by posting video ads on users' newsfeeds. The company aims to sell video ads for around $1 to $2.5 million per day. But this may be a conservative estimate. The market for video ads is booming, as evidenced by the more than $5 billion in revenue that Google probably generated from YouTube last year.

Another promising revenue source are game fees. Mobile users, which represent more than 21% of Facebook's total traffic, are more likely to download and play games on their smartphones than PC users. Therefore, as Facebook continues increasing its mobile exposure, the company could increase its revenue from game fees.

Notice that the company currently charges a 30% revenue share fee to game developers for using its platform. It did not change its fee, even after Google announced a reduction in fees in 2012. This is because Facebook, aware of its unique social features, knows it has pricing power.

According to Morningstar analyst Rick Summer, Facebook could also benefit enormously from opening up its advertising platform. The company, which also owns Instagram, could end up becoming a successful intermediary to place ads across the Internet at large, and compete directly against Google's AdSense program, which has grown to include more than two million publishers.

Making profit from strategic acquisitions
Finally, let's not forget that Facebook could also find additional sources of revenue in the several start-ups it acquired in the past few years. Like Yahoo!, Facebook is an active buyer, acquiring more than 40 companies since its inception.

An interesting example is Facebook's acquisition of Parse in 2013. This allowed the social network company to get exposure to the market of paid tools for mobile app developers, which could be worth as much as $100 billion by 2015, according to Research2Guidance.

Facebook could learn more about how to make money from acquisitions from the guru of tech acquisitions, Yahoo!, which has acquired more than 90 companies in the past. In the past three years, Yahoo! became a successful portfolio of tech investments, with meaningful exposure to Alibaba's Taobao -- the biggest e-commerce site in China -- and Yahoo! Japan. The company is also relying on strategic acquisitions to increase its total audience.

Final Foolish takeaway
At $57 per share, Facebook may seem expensive at first glance. However, a careful look at the company's recent performance and milestones shows the social network still has plenty of room for growth left. Attractive mobile exposure, video ads, consistent growth in user base, the possibility of opening up its advertising platform, and strategic acquisitions, could help Facebook to continue beating the Street's consensus in 2014.

Adrian Campos has no position in any stocks mentioned. The Motley Fool recommends Facebook, Google, and Yahoo!. The Motley Fool owns shares of Facebook and Google. Try any of our Foolish newsletter services free for 30 days. We Fools may not all hold the same opinions, but we all believe that considering a diverse range of insights makes us better investors. The Motley Fool has a disclosure policy.