Robots -- once the sole domain of futuristic cartoons, films, and literature -- are exploding onto the scene. You know when tech behemoths such as Google and Amazon.com are snatching up robotics companies, innovative new uses will soon follow – and, importantly for investors, demand will likely ramp up.

First, a recap of the basics, and then we'll get to a new batch of robotics companies: select non-pure plays trading on a major U.S. exchange, and some foreign companies that trade over-the-counter in the United States.

1. How many non-pure-play robotics companies trade on major U.S. exchanges?
There are many non-pure-plays, with the approximate percentage of their revenue generated from robotics varying widely. Three that generate a fair chunk of their revenue from robotics are AeroVironment (NASDAQ:AVAV), Accuray, and ABB (NYSE:ABB). (Big defense companies such as Boeing, Northrop Grumman, and Lockheed Martin have robotics divisions; however, they're a very small part of their overall businesses.)

Let's start with the biggie -- Switzerland-based ABB, which has a $60.7 billion market cap. This company provides power and automation technologies for utility and industrial customers worldwide. ABB is considered among the world's largest makers of industrial robots and is heavily focused on the auto industry, with major, long-term customers including Ford and BMW.

Robotics is a unit within its discrete automation and motion division, and since ABB reports financial results down to only the division level, it's not possible to tell what portion of its business comes from robotics. This division has been performing well. It generated revenue of $9.4 billion in 2012, or 22% of total revenue, up 6.8% from the year before, while its operational EBITDA margin (that's earnings before interest, taxes, depreciation, and amortization) was 18.4%, down slightly from 2011's 18.9%. It appears that robotics is doing well, as ABB stated in its 2012 annual report that the unit's revenue "continued to grow at a double-digit rate."

Investors interested in a large-cap company with exposure to industrial robotics, as well as some other attractive niches, such as construction of electricity grids -- ABB is the largest player here -- might want to further explore this company.

AeroVironment, which has a market cap of $675 million, is involved in two businesses: making unmanned aerial vehicles, or "drones," for the military, and manufacturing and installing charging systems for electric vehicles.

The company is slightly unprofitable on a trailing-12-month basis, with a profit margin of -1.8%. Analysts expect AeroVironment to be profitable in 2015, as the company sports a forward P/E of 52.7.

Many are bullish on AeroVironment, and I agree that both businesses have potential. That said, I think investors new to robotics would be better served looking to commercial and/or consumer robotics plays at this time, as defense plays are subject to considerable uncertainty because they rely heavily on government spending.  Those more comfortable with the topic of robotics, however, might further explore AeroVironment. Certainly, Amazon's plans, announced late last year, to use drones for lightweight, short deliveries could heat up the drone space in the near future.

While AeroVironment has outflown our industrial robotics player over the one-year period, the five-year period is a different story. 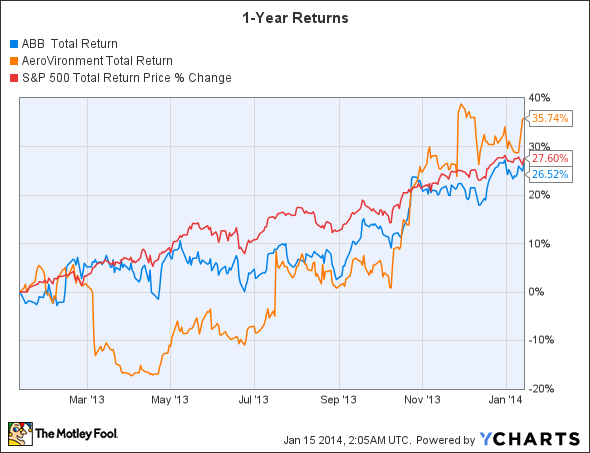 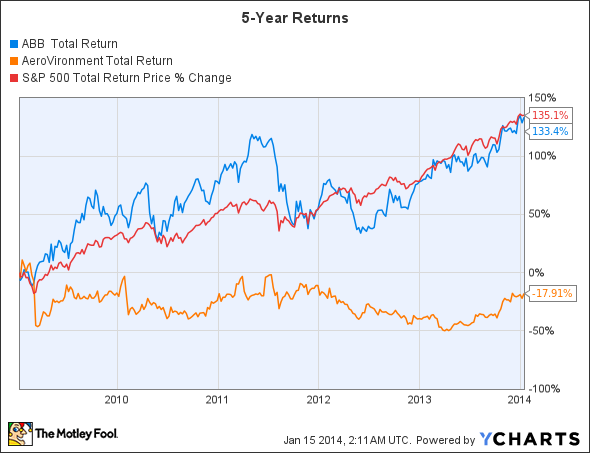 Over the 10-year period, ABB has considerably outperformed the market, returning 438% vs. the market's 101%. ABB is quite cyclical and was walloped during the Great Recession; however, its stock price is now very close to the all-time high it reached in 2008. AeroVironment hasn't yet traded for 10 years, as it went public in 2007.

2. How many publicly traded foreign robotics companies are there?
There are many foreign players. In fact, Japan is robot-central when it comes to industrial robot makers.

Several of the major players that trade over-the-counter in the U.S. are KUKA Robotics (German; robotics is one of two divisions, with a focus on the auto industry; provides industrial and service robots); Yaskawa Electric (Japanese; robotics is one of three divisions; focuses on service robots primarily for the auto and electrical equipment industries); and Fanuc Robotics (Japanese; manufactures industrial machinery and robots).

Look for coverage of select OTC stocks in the future.

3. My overload function is going off. Is there a simpler way to invest in robotics?
For the exchange-traded-fund fans among you, there's the relatively new Robo-Stox Global Robotics & Automation ETF (NYSEMKT:ROBO). This ETF, which began trading in October, had 77 holdings when it launched.

As with all mutual funds and ETFs, the main benefit is also the main drawback: diversification. An ETF with a large number of holdings is likely never going to hit one out of the ballpark and return, say, 85%, as iRobot did in 2013. However, it's also likely not going to be a considerable loser, either, as long-term winner Intuitive Surgical was in 2013.