It's not the number of people, but their age breakdown.

The Department of Health and Human Services' report Monday detailing enrollment in Obamacare through December was chock-full of data.

But the most important number? 24%.

That's the percent of people that selected a plan who were 18 to 34 years old, a group assumed to be relatively healthy.

To work, the Affordable Care Act, commonly referred to as Obamacare, needs around 40% of enrollees to come from that group because they'll, on average, cost the insurers less than they pay in premiums. The difference is used to cover those who have higher-than-average medical costs.

According to the Kaiser Family Foundation, adults aged 18 to 34 make up about 40% of the total uninsured population, so they're clearly not signing up at the same rate as those in other age brackets.

Young, invincible, and procrastinating
The late enrolment for young adults isn't particularly surprising. Most are likely healthy and were uninsured because they didn't think the cost of health insurance was worth the risk of getting sick. Open enrollment continues through March, so why not avoid paying the premiums for a few more months?

In December, young adults picked up their rate of enrollment. For the month, eight times as many young adults under 35 signed up for Obamacare on the Federal exchange than did in October and November combined, which beat the seven-fold increase for the overall population. 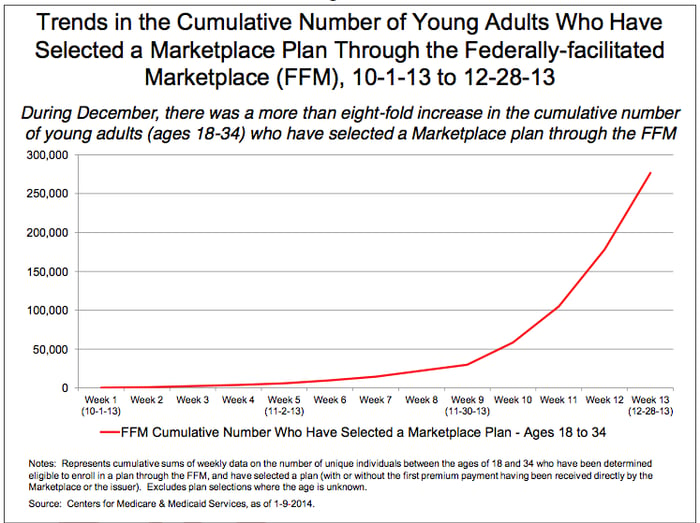 It's possible some people are shopping on the exchanges but buying at the individual insurer's websites, much like travelers do with airline and hotel websites like Expedia and Travelocity. A single adult making above $46,000 doesn't qualify for a subsidy, so there's little incentive to buy on the site.

Of course, most people making above $46,000 are probably covered under their employer's plan, but there are certainly some people who are self employed or working for small companies that don't have coverage.

What if they don't show up?
Insurers will have to raise rates. That's how insurance works.

Health insurers, such as UnitedHealth Group (UNH -0.05%) and Aetna (AET), make educated guesses about the combined medical expenses for everyone who will enroll in a given plan, add overhead and a profit margin, and divide by the number of enrollees to get the cost per person.

When they guess wrong, the profit margin gets eroded. Last week, Humana (HUM 0.67%) said its projected enrollment was "more adverse than previously expected," although it backed its previous 2014 earnings guidance. At this point, it isn't clear if Humana just guessed wrong, or if UnitedHealth, Aetna, and the rest of the insurers could suffer because the risk pool is truly worse than the industry expected. Presumably, insurers factored in the late enrollment by young adults, so just because we're under the 40% goal doesn't mean insurers are losing money.

Before Obamacare, insurers kept costs of individual plans down by refusing to enroll people with preexisting conditions. Now, much like employer-sponsored plans that accepted preexisting conditions, insurers are counting on the healthy to cover costs for the sick who can no longer be excluded. If young adults ignore the mandate and pay the penalty, the risk pool will end up being a lot more costly, leading to increased insurance costs in 2015 and beyond.

Interestingly, because rates are set by state, the number of young adults in each state will affect any price increase we see. Adults under 35 only made up 17% of the enrollees in Arizona and West Virginia. The District of Columbia topped the list, with 44% of enrollees coming in that age category.

Give it time
While 24% is the most important number, it isn't the final count. Enrollment in January, February, and especially March will ultimately determine whether insurers will have to raise rates next year.

Having young adults make up 40% of the enrollees is ideal, but if we don't hit that breakdown by March, it isn't the end of the world. Insurers usually don't build models based on the ideal circumstances, and the sustainability of Obamacare isn't going to be determined by a single year.

Fool contributor Brian Orelli has no position in any stocks mentioned. The Motley Fool recommends UnitedHealth Group. We Fools may not all hold the same opinions, but we all believe that considering a diverse range of insights makes us better investors. The Motley Fool has a disclosure policy.

Beat the Dow Jones With This Unstoppable Dividend Stock
395%