Like Blockbuster and the old GM shares before it, WiMax innovator Alvarion offers its investors absolutely zero value. You really shouldn't own this stock anymore.

Do you own shares of wireless chip designer Alvarion? If the answer is "yes," I have to wonder why -- and you really should drop them like a hot potato.

Alvarion bet the farm on the wrong horse as its WiMax 4G technologies lost out to the competing LTE 4G solution. The business never recovered, and share prices plunged. Alvarion's five-year chart is not pretty: 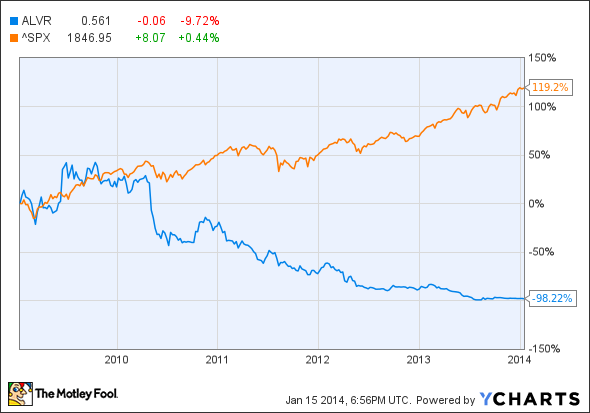 The stock is down more than 98%, and it just got delisted from the Nasdaq for failing to meet minimum trading price limits.

So what, right? It's just a flesh wound! Mighty turnarounds have started from far worse rock-bottom positions. Delisted penny stocks bounce back and relist all the time. Buying or holding Alvarion today is simply a bet on the company's comeback story...

Alvarion is not your average turnaround story in the making. The Israeli company is "in interim liquidation and receivership," pending an $11 million sale of its assets and operations to Hong Kong-based mobile and landline network operator Valley Telecom.

The key word in Alvarion's epithet is "liquidation." The company is going through a court-ordered liquidation as of December 2, 2013. That dreaded term tells you that it's a dead company walking. The shares you hold today will inexorably move toward a net worth of absolutely zero, and there's nothing you can do about it.

Sure, you can still trade the stock. Remember when Blockbuster shouldered the "liquidation" title in 2010, before DISH Network (DISH 0.21%) bought what's left of the former video rental giant? Well, you can still buy and sell Blockbuster stock on the Over-the-Counter markets.

Trading under the BLIAQ ticker as BB Liquidating (there's that horrible word again), Blockbuster shares have plunged 95% since filing for bankruptcy. There were times along the way where Blockbuster owners matched the returns of Netflix (NFLX -1.36%), or even beat the company that killed Blockbuster; but those were just the last twitches of a decomposing zombie. 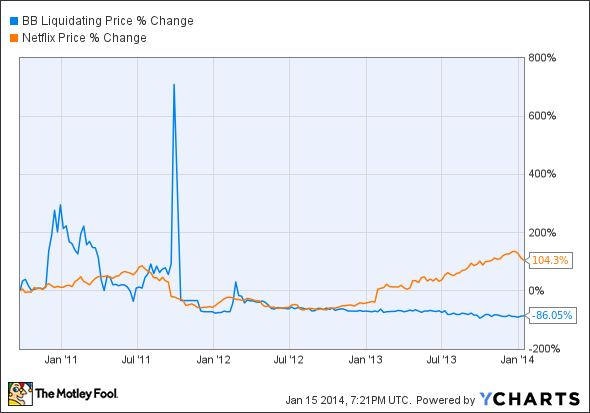 DISH bought Blockbuster's assets very cheaply, leaving nothing for the video store chain's shareholders, and only pennies on the dollar for Blockbuster's debt owners. The last Blockbuster store is about to close, the DVD mailer service has ended, and Blockbuster is now just a brand name on a website. DISH could never figure out how to make money on the seemingly irresistible discount price it paid for Blockbuster.

But like I said, you can still trade Blockbuster stock. You shouldn't... but you could. This is normal, even if the practice makes no sense.

The last Circuit City share changed hands nearly three years after the electronics store filed for bankruptcy. You might think that General Motors (GM -0.47%) bounced back strong from its 2009 bankruptcy, more than doubling in the last year-and-a-half. But that's not your father's GM stock. It's a totally new share, issued from the ashes of GM's bankruptcy reorganization. The old shares were renamed to Motors Liquidation Company (see a pattern yet?), then canceled at the end of March, 2011. As GM's management had been saying all along, those shares ended up being worth absolutely nothing.

And that's exactly where Alvarion is going now. I don't care that the stock was delisted from the Nasdaq, because nobody should be trading it in the first place.

Some would say that Netflix is destined for bankruptcy in the long run, too. They fear that the company will drown under outsized content costs that no amount of low-margin streaming customers could make up for. As a Netflix shareholder, I obviously disagree with every piece of that argument, But let me be clear: If Netflix ever files for bankruptcy, I'll be the first investor to sell my shares. Because once you slap that "liquidating" title on the company name, there's just no going back.