Exelixis has rallied strongly over the past 12 months, despite only having a single approved drug, which is only expected to generate $50 million in peak revenues. Can the stock continue soaring thanks to these 3 catalysts, and how does its future involve AstraZeneca, Johnson & Johnson, Medivation, and Roche?

Shares of Exelixis (EXEL -0.34%), a biotech company focused on small molecule treatments for cancer, have performed exceptionally well over the past 12 months, rallying more than 70% even though its one approved drug, Cometriq, is hardly expected to be a blockbuster.

Why has Exelixis, which once traded in the mid-$40s prior to the dot-com crash of 2000, suddenly generated so much bullish interest? 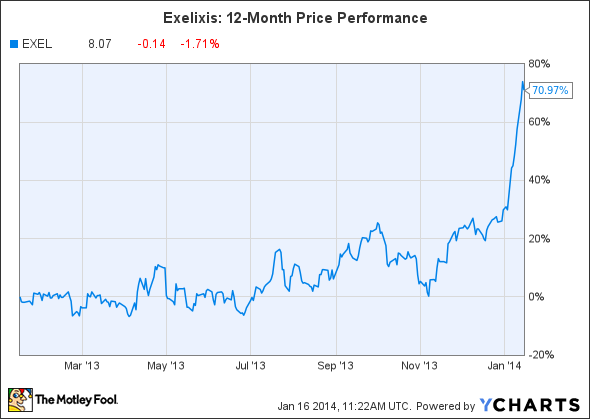 Let's take a closer look at the company, how companies like AstraZeneca (AZN -2.77%), Johnson & Johnson (JNJ 0.92%), Medivation (MDVN), and Roche (RHHBY -2.12%) could affect its future and three potential catalysts that could propel the stock to higher levels in 2014.

Exelixis in a nutshell
Exelixis' only marketed drug, Cometriq, was approved by the FDA in November 2012. The drug is approved to treat metastatic medullary thyroid cancer (MTC).

This was a major development because there are very few approved treatments that specifically that target that rare type of thyroid cancer -- traditional treatments consist of surgery followed by hormone therapy, radiation therapy, and chemotherapy.

Cometriq's only true competitor on the market is AstraZeneca's Caprelsa, a drug that was approved in the U.S. in 2011 and in Europe in 2012 for the same indication. Off-label competitors for metastatic MTC include Bayer and Amgen's Nexavar and Pfizer's Sutent.

Due to the rarity of MTC, which only accounts for 3% to 4% of all thyroid cancer cases in the United States, peak sales estimates of Cometriq are low at around $50 million. Between the commercial launch of Cometriq in January 2013 and the end of the third quarter on Sept. 30, 2013, Exelixis only reported $10.7 in revenues from the drug.

As expected, the company's financial condition is a bit precarious, with $279 million in cash being weighed down by $342 million in debt and a negative operating cash flow of $190 million.

Yet the stock has soared, giving it a lofty price-to-sales ratio of 41 and price-to-book ratio of 11. Why are investors willing to give Exelixis the benefit of the doubt and look past its lackluster sales growth and feverish fundamentals?

1. Additional approvals could unlock Cometriq's true value
The main thing to remember about Exelixis is that MTC was only expected to be the first of several approved indications. Here are the other main indications that the company is pursuing for the drug:

The most compelling reason to believe that Cometriq can be approved is the fact that phase 2 data showed a median overall survival rate of 10.8 months in a population where 73% of the patients had two or more prior therapies.

While this can't match the 18.4 months that Medivation/Astellas' Xtandi has accomplished or the 15.8 months claimed by Johnson & Johnson's Zytiga, it's still enough to warrant a possible FDA approval.

There are two main reasons that it could be approved:

Top-line data from both COMET trials are expected later this year -- which would be a major near-term catalyst for the stock.

2. A possible European approval in 2014
Although Exelixis' current market of metastatic MTC in the U.S. is small, a possible approval in Europe could easily double Cometriq sales.

So far, things look good -- last month, Exelixis announced that the European Committee for Medicinal Products for Human Use (CHMP) had issued a positive opinion regarding its marketing authorization application (MAA) for Cometriq for the same metastatic MTC indication.

If approved by the European Commission, Cometriq should be commercialized quickly, thanks to a previously signed commercialization agreement with Swedish Orphan Biovitrum (Sobi) in 2013.

Most importantly, an approval in Europe would help Cometriq gain ground against Caprelsa, which only generated $27 million in sales in fiscal 2012.

Its first main drug beyond Cometriq is GDC-0973 (XL518), a drug which is being developed by Roche's Genentech unit under a collaboration agreement with Exelixis. Exelixis handled the drug through the end of phase 1 trials, after which it was transferred over to Genentech.

XL518 is a signalling pathway inhibitor which could have multiple applications in a variety of cancers. The drug is being tested first in a phase 3 trial as a late-stage skin cancer treatment in combination with Roche's Zelboraf. 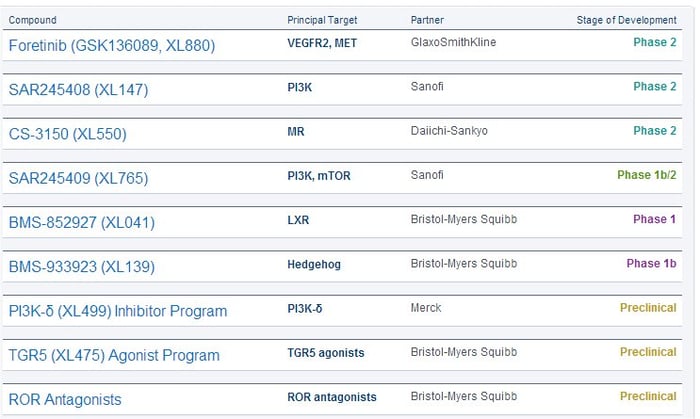 Together, these collaborations have the potential to yield milestone payments of up to $2.4 billion.

Exelixis anticipates 10%, 41%, and 49% of those payments to respectively come from clinical development, regulatory, and commercial milestones. Those payments could support the top line for Exelixis, which has only generated $27 million in revenue in the first three quarters of 2013.

More importantly, the backing of all these major companies bodes well for a smaller biotech company like Exelixis.

The Foolish takeaway
In closing, Exelixis is a risky stock with lots of upside potential if Cometriq is approved for additional indications beyond metastatic MTC. However, the company's financial position is a bit shaky, and could lead to additional share-diluting stock offerings.

For now, good news about its prostate cancer progress and an approval in Europe could cause the stock to rally in the near term. Meanwhile, Exelixis' collaborations with major pharmaceutical companies should provide it with a small cash cushion if times get tough.

Fool contributor Leo Sun has no position in any stocks mentioned. The Motley Fool recommends and owns shares of Exelixis and Johnson & Johnson. We Fools may not all hold the same opinions, but we all believe that considering a diverse range of insights makes us better investors. The Motley Fool has a disclosure policy.

Worried About Rising Interest Rates? These 2 Growth Stocks Could Offer a Solution
401%