Another quarterly report, another drop in Intel's (NASDAQ:INTC) stock. The world's largest chip maker filed its final 2013 earnings statement last night, and shares were down more than 4% lower in early trading. The cause of that drop has already been pinned on mediocre guidance, but it may be just as likely that a mediocre performance is to blame, as you'll soon see in the charts below. Let's dig into the key numbers from Intel's report now:

These numbers were hit-or-miss when it came to Wall Street's targets. Analysts  had sought $13.7 billion on the top line and $0.52 in EPS, so Intel beat revenue expectations but narrowly missed on profit -- a miss that can be chalked up to a higher-than-expected tax rate for the quarter. One of the best data points in a generally underwhelming report is the sequential improvement and year-over-year stabilization in PC chip sales. For a company that may better represent the overall health of the PC market than any other, this is a very important milestone -- Intel simply has nothing big enough on the near horizon to replace its aging PC-chip cash cow.

Let's take a look at how Intel's latest results stack up against earlier quarters: 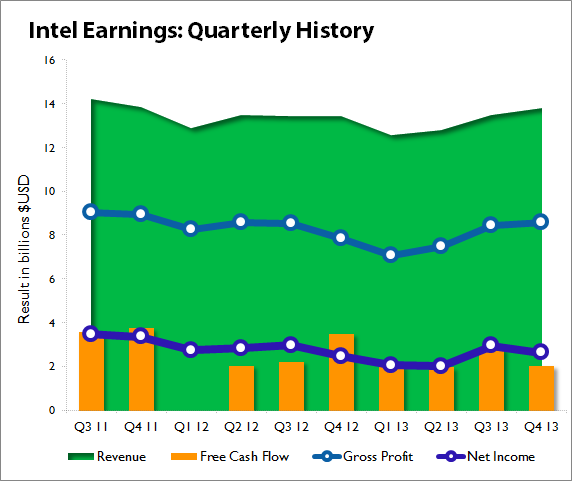 While Intel's revenue and gross profit figures have rebounded well from a weak first quarter, the company's earnings remain stuck in somewhat of a rut -- its latest quarterly profit exceeded the year-ago quarter's result by 6%, but was 22% below net income for the same period in 2011. Free cash flow has likewise been stuck in somewhat stuck due to a ramp-up in research and development spending. In 2013, this expense was 5% greater than 2012's R&D spending, and it was a whopping 27% greater this year than 2011's R&D spending. This is to be expected as Intel pushes hard into smaller and smaller transistors, which will require advanced engineering solutions to be produced at scale.

While the near term does look somewhat brighter, Intel's trailing 12-month results look a little different and should be of concern to long-term investors. Quite simply, Intel has not been improving in recent quarters when we measure its performance in trailing 12-month terms. In fact, "stabilizing" might be a generous term: 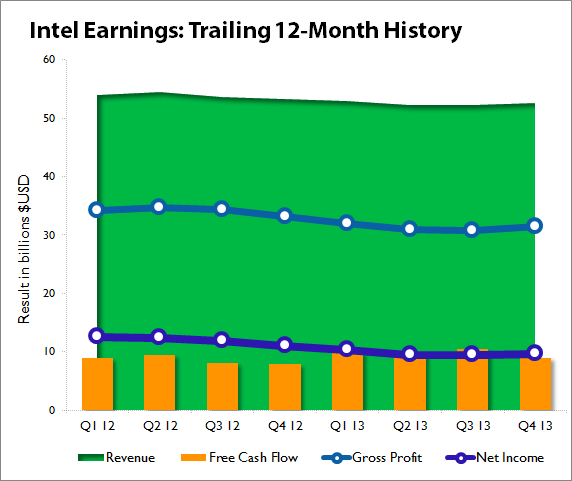 Intel's late-year improvements have only managed to flatten out a slow but unmistakable slide from 2011's heights. The wide range of Intel's first-quarter 2014 revenue guidance -- it could be anywhere from $12.3 billion to $13.3 billion, with $12.8 billion as the midpoint -- no doubt has spooked some investors who remember that the company recently offered a similarly wide guidance range for other recent quarters.

This latest quarter came in slightly above Intel's earlier guidance midpoint of $13.7 billion, but its second- and third-quarter results came in a hair below the middle of their guidance ranges this year. If we assume that the $12.8 billion midpoint is the likely result for Intel's revenue in the current quarter, we wind up with a very modest 2% year-over-year improvement versus 2013's first quarter, but a 1% year-over-year decline on a trailing 12-month basis.

Is there hope ahead? In the company's earnings call, Intel CFO Stacy Smith projected flat earnings for the full year as a result of low double-digit percentage growth in server chip sales and another single-digit decline in PC chip sales. However, newly installed CEO Brian Krzanich highlighted an 11% growth in desktop sales and 18% growth in high-performance computing for the fourth quarter, which points to Intel's continued strength at the high end of the computing market.

The company also saw year-over-year growth of 35% for cloud solutions and 24% for storage solutions, with sales of networking products up 31% for the full year. While none of these segments have anywhere near the heft of Intel's PC segment, they are all likely to generate long-term growth as the world moves toward a more distributed and more connected model of computing. The problem for Intel investors is that this transition will involve fewer nonmobile PCs, and Intel hasn't quite made the mobile leap just yet. One of its ambitions for 2014 includes placement in 40 million tablets, a fourfold increase over 2013's volume. Gartner recently projected that total global tablet sales would reach 263 million units in 2014. A 15% market share is better than Intel's mustered in mobile before, but it's a far cry from the company's decades-long dominance of the PC market.