Eric Bleeker
(tmfrhino)
Author Bio
Eric started at The Motley Fool in 2008 working in the Tech & Telecom sector. Today, he's the General Manager of Fool.com. You can follow him on Twitter to stay up to date with his tech industry analysis. Follow @bleekertech

By my estimate, at least 950 million smartphones were purchased across the world in 2013. In their 30-plus year history, PCs never crossed much beyond 350 million sold in a year.

As astonishing as those numbers are, the shock factor of huge smartphone numbers has worn off a bit. Walking around any major city, it takes seconds to spot someone holding one. We've watched in awe for years as smartphone growth exploded, but the emergence of smartphones is no longer a "new" story.

Yet, it's important to remember that in 2011, researcher IDC was predicting that the world wouldn't hit 1 billion smartphones sold until 2015. We almost hit that number last year -- in just half the time predicted. That's truly incredible.

Smartphones to even the poorest in the world
When you consider where smartphone growth is coming from -- Asia, Africa, etc. -- what has really been underestimated is not only the growth of smartphones, but also the number of lives forever changed. 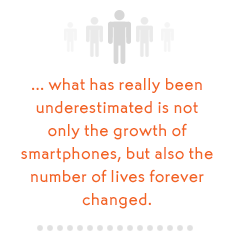 These are areas that less than a decade ago were targeted by the One Laptop Per Child organization, a group that -- with much fanfare -- was trying to solve the riddle of how to provide cheap computers to poorer areas of the world. It was a noble cause, but as of late 2011, its computers still cost about $209 each.

The problem was "solved," but not by a charity organization. Relentless competition in the mobile industry drove prices down beyond what anyone could have imagined just six years ago.

Smartphones and tablets can be found plentifully across the world at less than $100. Earlier this month, I walked the floor at the world's largest technology convention, CES, and saw capable tablets being sold for $35. Some smartphones are starting to push below $20.

The world's greatest investing opportunity, if you think about it the right way
Consumers buying these cheap tablets and smartphones don't have a lot of money. There's certainly little to no money being made on the sale of the devices, either.

If you're thinking about this as an investor, there are ways to "play" the trend of smartphones in even the poorest parts of the world. Google is dominant in almost every country across the globe and controls the Android platform that cheap phones are built on. Facebook crested above 1 billion users in 2012. In China, search engine Baidu is up 64% across the past six months as it starts making money off all these new mobile users.

However, the trend of a world where most people are connected to the Internet is much larger than the direct money a few technology companies can make. 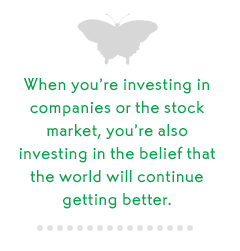 When you're investing in companies or the stock market, you're also investing in the belief that the world will continue getting better. Companies in America have seen tremendous growth in their profits thanks to selling to consumers in emerging countries like China, Indonesia, and Brazil.

There are limits to the growth of the world if the majority of its population isn't connected to our shared learning, however. Today, only 39% of the world's population is connected to the Internet. Smartphones will improve the everyday lives of people in poor countries. In Kenya, a company named M-Pesa has created mobile-phone-based money transfers for small transactions. Herdsmen no longer carry cash to the market.

However, the biggest effect technology will have is on education. The amount of free education available on the Internet is incredible, and it's being quickly translated across languages. Most poorer countries' populations skew younger; the thought that these children will have access to the world's learning on devices as cheap as $20 is awe-inspiring. The world moves incredibly fast, and that speed increases the more we level the playing field by providing better education across it.

With half the world's population under 25, the one area you don't want to underestimate is how quickly providing ubiquitous technology and learning to younger populations could change the world. If you're an investor, whether in Google or an index fund, that's an exciting proposition. Because a world where more people are educated leads to innovation and improvements, greater economic growth, and, in turn, better returns for investors across the world in coming decades.

A better tomorrow
Twenty-six years ago, the Internet as we know it -- the World Wide Web -- didn't exist.

Twenty-one years ago, the Manhattan of China -- Shanghai's Pudong district -- was a mudflat. Today, it looks like this.

Sixteen years ago, the cost to stream a movie online would have been $270. Today, it costs less than $0.03.

Thirteen years ago, mobile data was still on the drawing boards at Verizon and AT&T. Today, we've moved past 3G and on to LTE; fast mobile wireless covers the country. 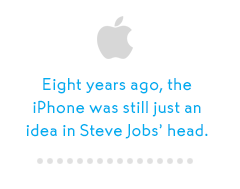 Eight years ago, the iPhone was still just an idea in Steve Jobs' head. Today, there are nearly two billion smartphone subscriptions across the globe.

In fifteen years, parts of our lives today will look positively quaint.

Technology companies and Silicon Valley can often appear self-righteous and self-important. They constantly talk about "creating a better world" as if the world's other industries were helpless without them.

Yet smartphones are one of those truly transcendent innovations that will help bring billions of more consumers up to the middle class. They will change the world.

That change won't all be driven by Silicon Valley alone. It'll be helped along by the makers of the cheapest smartphone components in China, who tirelessly compete against one another, making devices cheaper and cheaper each year. The change will be driven by companies helping to create education for the next billion smartphone owners. And yes, it'll be helped along by Silicon Valley as well. Advances in Android will help ensure that even the cheapest smartphones have a modern operating system that can access all the information across the Internet.

The best time in human history is this moment right now, whenever you're reading this. Absent brief stretches, the world has been moving in a positive direction for hundreds of years. I can't say for sure what the world will look like in 15 years -- no one can -- but looking at a world connected to information, I can only say it'll get better.