Apple has a history of innovation, while Google is in the process of making history right now.

In a recent interview with CNBC, Steve Jobs' biographer, Walter Isaacson, said that Google (GOOGL -1.38%) is more innovative than Apple (AAPL -2.60%)-- clearly a bold statement from someone who spent hours interviewing Jobs and many people from Apple.

While some investors will inevitably disagree, there are three main reasons he's right: wearables, automobiles, and the coming Internet of Things. Google is already strolling down these three avenues, and all of them could propel the company ahead of the iMaker in the not too distant future.

First-mover advantage in wearables
With Google's Glass experiment, the company is one of only a few technology concerns that has produced and released wearable technology. While Glass is still being tested out by "Explorers," Google recently opened up invitations to purchase Glass to those with a Google Play Music All Access account.

While Glass may not appeal to everyone, and has come with plenty of criticism, the device still puts Google ahead of Apple and many other companies looking to make a business out of wearables. Of course Apple is rumored to be working on an iWatch that could release later this year, but that still doesn't make up for the experience Google is gaining tight now through Glass.

Juniper Research expects shipments of smart wearable devices like watches and glasses will hit 130 million by 2018, and spending on the devices could hit $19 billion that same year. While it's difficult to predict exactly how consumers will respond when an iWatch or Glass hits the mass market, the fact is that Google is already making a huge splash in the space and is gaining traction with consumers and developers because of it. When it comes to innovation, tech companies can only get credit for what products they actually have made, and that's why Google wins this category for now.

The other mobile revolution
Though wearables could eventually be a huge industry, there's already one industry that's undergoing a massive technological change right now: automobiles. Car companies are trying to keep up with new technologies, platforms, and apps but the pace of mobile is much faster than a carmaker's product release. To address technology in cars, Google recently announced the Open Automotive Alliance with chipmaker NVIDIA and automakers Honda, Audi, General Motors, and Hyundai to bring its Android platform into vehicles later this year. 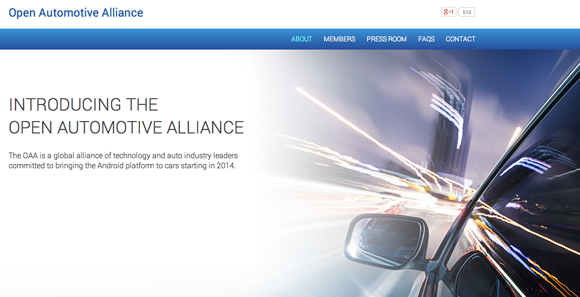 Bringing the latest tech into cars is time consuming and expensive, and this alliance could make automobile infotainment systems tech-relevant, while equally spreading the developing responsibility across those in the alliance.

Critics will say that Apple moved into the automotive space first, with its iOS in the Car feature and Siri Eyes-Free. While that's true, what the automotive industry desperately needs is a cohesive platform, and it's doubtful Apple's legendary closed operating system fits the bill. Google has opened its alliance up to other technology companies and carmakers, essentially replicating the path it's taken to make Android such a popular mobile platform.

The automotive alliance is in addition to the amazing strides Google has made with autonomous cars. That experience, along with automaker and other relationships it's made in the industry, could help make mass adoption of Android in cars a reality.

Apple launched its car connectivity first, but Google is poised to revolutionize how we all use in-car infotainment systems.

Google and the Internet of Things
Aside from wearables and automobiles, the coming Internet of Things is another advantage Google has over Apple. The Internet of Things refers to previously "dumb" devices, like a refrigerator or a shipping container, that will eventually communicate with other objects around it to improve efficiency and send relevant information to users. Cheaper sensors and pervasive wireless connectivity are helping to fuel this movement, and Google is right there.

This week the company just announced its intent to purchase the in-home innovations company Nest Labs, which makes smart thermostats and smoke alarms, for $3.2 billion.

Nest's smoke detector connects to Wi-Fi networks, communicates which room smoke is coming from, tells whether the alarm is going off, monitors battery levels, and can send all of that information to mobile devices, in addition to sending traditional signals.

The company's smart thermostat is a learning device that tracks the temperature patterns of its users, knows when a user leaves the home, learns sleeping and waking patterns, and programs itself to match a all of those preferences. It uses light, humidity, and activity sensors to do all of this, without any need for the owner to set any pre-programmed instructions. While it may seem a bit too futuristic for some, it's part of the future of connected objects, and it's already here.

By 2020, Gartner expects installed base units for the Internet of Things to be 26 billion, which doesn't include PCs, smartphones, or tablets. International Data Corporation went so far to say that the Internet of Things is "poised to change everything" and will result in $8.9 trillion in global revenues by 2020.

And as for Google, its purchase of Nest puts it in a great position to benefit from this and to keep it a few steps ahead of Apple. It's not that the iMaker doesn't have the capability to create innovate products, or buy companies that do. It's just that at the moment Google is moving much faster and in more directions than Apple. That certainly could change this coming year, as Apple releases a smart watch or other product that shows off its innovative potential, but for now the future belongs to Google.

Fool contributor Chris Neiger has no position in any stocks mentioned. The Motley Fool recommends Apple, Gartner, General Motors, Google, and NVIDIA and owns shares of Apple and Google. We Fools don't all hold the same opinions, but we all believe that considering a diverse range of insights makes us better investors. The Motley Fool has a disclosure policy.