Please ensure Javascript is enabled for purposes of website accessibility
Log In Help Join The Motley Fool
Free Article Join Over 1 Million Premium Members And Get More In-Depth Stock Guidance and Research
By Harsh Chauhan - Jan 18, 2014 at 9:30AM

An analyst downgrade doesn't mean the end of the world for this solid tech stock.

Flash memory maker SanDisk (NASDAQ: SNDK) was firing on all cylinders in 2013. The stock gained 65% last year, witnessing terrific revenue and earnings growth. However, early in December, Nomura Securities analyst Sidney Ho rained on SanDisk's parade by downgrading the stock from "Neutral" to "Reduce." Ho cited increasing industry supply and SanDisk's "less competitive cost structure" as the reasons behind the downgrade, reducing his price target from $66 to $56.

Not a big concern
But, it is difficult to agree with Ho's opinion. SanDisk's bottom line is expected to grow at a CAGR of 25% in the next five years, and the stock trades at less than 20 times trailing earnings. Moreover, Susquehanna Financial Group analyst Mehdi Hosseini thinks that SanDisk is set for greater gains with Apple's (AAPL 0.04%) next iPhone flagship this year. In addition, memory chipmaker Micron Technology (MU 2.40%) recently issued a solid report, and expects strong demand from the computing, mobile, and networking end markets, especially solid-state drives.

And as far as the cost structure is concerned, there is no red flag in this department so far. SanDisk saw terrific growth in its gross margin the last time it reported earnings. In fact, non-GAAP gross margin improved to 50.1% in the quarter from 31% in the year-ago period.  SanDisk managed to achieve such impressive growth on the back of better sales of its higher-margin items. As such, investors should concentrate more on the catalysts that could propel SanDisk higher going forward -- and there are quite a few.

Bracing for a smartphone windfall
Apple was SanDisk's biggest customer in fiscal 2012, accounting for 13% of revenue. Samsung was the other major customer with 10% of revenue.  SanDisk hasn't filed its 10-K for the recently concluded fiscal year yet, but it can be said that the company definitely enjoyed good growth from both these accounts, and the following chart explains why. 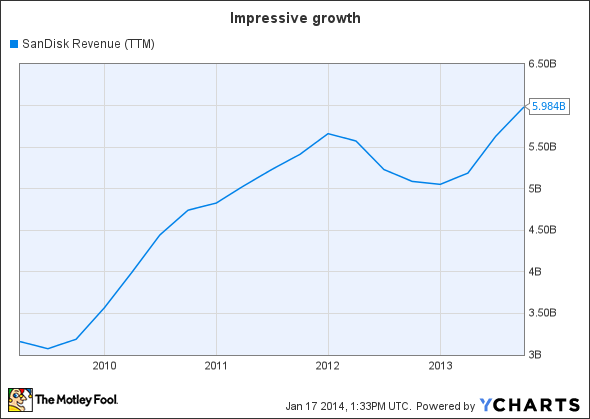 SanDisk's revenue grew rapidly in 2013, and sales of mobile devices from both Samsung and Apple played a big part in this. SanDisk had supplied flash memory for the iPhone 5 and could be a big beneficiary of the next iPhone as well.

According to Susquehanna Financial Group, Apple's next redesign of the iPhone would be a major overhaul. The Cupertino-based giant has reportedly begun talks with memory suppliers, and the Susquehanna analyst believes that considering SanDisk's strong position at Apple, it would be a big gainer from the next update. In addition, Apple's recent deal with China Mobile could prove to be another tailwind for component suppliers such as SanDisk, since ZDNet expects this venture to boost iPhone sales to the tune of 15 million to 20 million units.

Apart from these big two smartphone players, SanDisk is also focusing on the rapidly growing mid- and low-tier smartphone segments. According to IDC, sub-$200 smartphones will be the key drivers behind the market's growth, and this led the research firm to increase its growth forecast from 5.8% to 7.3% last year. SanDisk is looking to tap Chinese smartphone makers with its iNAND embedded flash offering, where it sees strong opportunity as OEMs are launching smartphones with growing average storage capacities.

A "solid state" of affairs
SanDisk has also seen robust growth in solid-state drives (SSD) and expects these to account for 25% of revenue in the current fiscal year. SanDisk had acquired SMART Storage Systems last year, which strengthened its position in client and enterprise SSDs. In addition, SanDisk's SSDs are seeing good demand and had gained qualification at six of the top seven OEMs in the third quarter. Also, SanDisk's 19-nanometer client SSDs are also gaining traction and have gained qualification at all the major PC makers.

The prospects in the SSD space look good. SanDisk seems to be ahead of the likes of Micron Technology, which is also seeing rapid growth in SSD revenue. In fiscal 2013, Micron's revenue from its own branded SSDs grew 76% from the previous year. However, Micron is laying more focus on its 20-nanometer and 25-nanometer processes, while SanDisk is already gaining pace in 19-nanometer technology. Thus, a smaller and more compact offering from SanDisk could help it attract more customers in the future.

The takeaway
After a solid run in 2013, there are very few reasons to suggest why SanDisk should slow down this year. SanDisk isn't expensive and it carries a dividend yield of 1.20%. It also has a strong cash position, and intends to use 70% of its free cash flow for buying back shares.Thus, investors who had a good time holding SanDisk in 2013 should continue doing the same this year, as the stock looks set to beat the market once again.

Harsh Chauhan has no position in any stocks mentioned. The Motley Fool recommends Apple. The Motley Fool owns shares of Apple. Try any of our Foolish newsletter services free for 30 days. We Fools may not all hold the same opinions, but we all believe that considering a diverse range of insights makes us better investors. The Motley Fool has a disclosure policy.