There's one job in high demand expected to have more than 1 million job openings and pay more than $65,000 a year.

Looking for a career change? There's only one place to start.

There is one job better than all the rest for people who want stable employment, high pay, solid benefits, and job security, and it doesn't even require a traditional, four-year college degree. And it pays nearly twice as much as other jobs with a similar education. And there are supposed to be more than a million new job openings in the coming decade.

Sound too good to be true? Well, it isn't. The best job for the next decade is a registered nurse.

Great pay
In 2012, the Bureau of Labor Statistics (BLS) reports that registered nurses had an average salary of $65,470, or $31.50 per hour, and the only entry-level education required is an associate's degree in nursing.

By comparison, the BLS notes that post-secondary teachers -- college professors and the like -- need a minimum of a master's degree (and often a doctorate) and get paid an average of $68,970 per year. That could mean seven or more years of college tuition payments for only a 5% bump in pay!

The average salary for all jobs that required an associate's degree stood at $39,000 in 2012 , meaning a degree in nursing is worth nearly 70% more than the average associate's degree. In fact, the top 10% of registered nurses also earned nearly $95,000.

527,000 of those jobs are expected to be the result new job openings, and not simply filling roles for people already in the workforce. You can see how dramatically better the pay is for a registered nurse than the other jobs that will be in high demand: 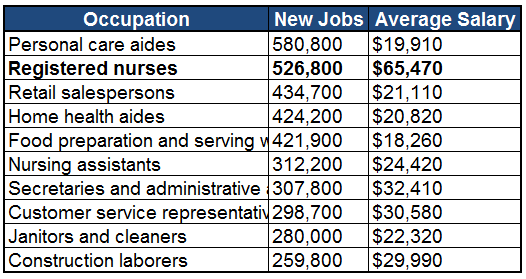 And it isn't as though these job demands will be greatest in specific areas of the country or only in hospitals, because registered nurses can work in almost any physician's office, nursing home, school, or even in home health care services anywhere in the U.S.

The reason for the heightened demand for registered nurses is the result of a number of factors. There is the aging population of the American public, an increased number of chronic conditions such as arthritis, diabetes, and obesity, and an expansion of health care coverage in America as a result of the Affordable Care Act, meaning more people will seek health care services. In addition, as a result of more pressure on hospitals to lower costs, more individuals will be sent to outpatient facilities that have higher needs for nurses.

Although other jobs often get more headline attention, few can provide the security, pay, opportunity, and societal benefit -- and require fewer hurdles to jump to become one -- quite like a registered nurse.

Editor's note: A previous version of this article incorrectly stated that a job as a registered nurse requires no college degree. The Fool regrets the error.