With more than 20 million customers, DirecTV (DTV.DL) is the largest satellite provider in the U.S., and the largest pay-TV company in the world, with the highest average revenue per user. Strong scale and technological advantages, exclusive content, and industry-leading customer service have allowed DirecTV to enjoy strong fundamentals in the past two years. In the third quarter of 2013, the company increased its top line by 6%, generating $7.9 billion in revenue.

As a result, DirecTV's stock has appreciated more than 110% since 2011, reaching a market capitalization of more than $37 billion. However, competition in television services is getting fiercer, with cable providers such as Comcast (CMCSA -0.43%) and Dish Network (DISH) offering high-quality alternatives for a lower price. In this difficult context, DirecTV can't remain quiet and expect revenues to continue growing. To improve its top line, the company is focusing on emerging markets, such as Latin America. But how does DirecTV plan to win in this region? 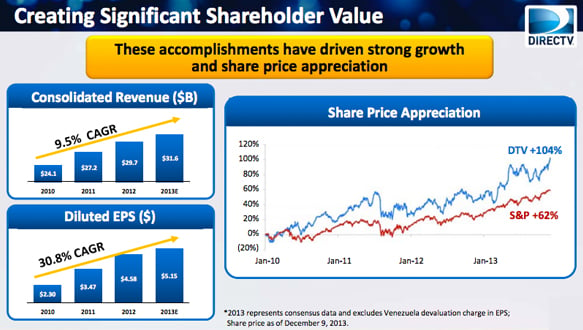 The saturated U.S. pay-TV market
The U.S. market for television services is extremely saturated. There are limited possibilities to expand its subscriber base, as most households are already subscribed to a cable company. And competition is intensifying, as cable operators look to protect their market share from satellite TV and Internet streaming companies. Even cable giant Comcast is struggling to find sustainable growth. The company's revenue for the third quarter of 2013 decreased 2.4% to $16.2 billion.

DirecTV and Latin America
Aware of the difficult environment in the U.S., DirecTV is searching for growth opportunities in emerging economies. Latin America is a fantastic market for DirecTV, because satellite technology is still relatively new to most consumers, who are enjoying higher incomes due to steady economic growth. Pay-TV penetration rose from less than a third of homes at the end of 2012, to nearly 45% by the end of 2013. More important, by 2018, 84% of Latin American households will enjoy pay-TV, according to Digital TV Research.

DirecTV enjoys higher margins and lower competition in this region. According to buy-side analyst Federico Flom, who has an $85 price target for DirecTV, the company could also benefit from easier access to exclusive content. Despite adverse foreign-exchange trends and restrictions by Venezuela, the company boosted the number of subscribers in this region by 260,000 in the latest quarter. Currently, Latin America generates roughly 20% of DirecTV's consolidated revenue.

However, there is both opportunity and risk in the region. As Morningstar analyst Michael Hodel notes, currency movements, political instability and piracy could have a negative impact on the firm's results. Competition is also growing, particularly in Brazil. This is why average revenue per user was very weak in this country, according to the latest earnings call. Finally, unfavorable regulatory changes and political instability in the region could add unwanted volatility to DirecTV's top-line performance. For example, the company is still waiting for approval to move equipment into Venezuela.

Competitors
With more than 14 million customers in the U.S., Dish Network is an important competitor. The company's extensive network of owned and leased satellites allows Dish to offer competitive prices.

But even Dish is not big enough to compete against cable providers, which can offer Internet access and phone service together with video programming. With more than 21 million video customers and more than 20 million broadband subscribers, Comcast is the main player here. In the first nine months of 2013, the company achieved increases in all business units. And video represents nearly half of Comcast's total revenue.

Final Foolish takeaway
Despite its rich market valuation and fierce competition in the U.S., DirecTV may still have upside potential. The company's focus on Latin America, exclusive content, share buybacks, and technological advantages could help to improve its top line.

Adrian Campos has no position in any stocks mentioned. The Motley Fool recommends DirecTV. We Fools may not all hold the same opinions, but we all believe that considering a diverse range of insights makes us better investors. The Motley Fool has a disclosure policy.

Why Chewy Was a Dog of a Stock on Wednesday