Mel Watt is in charge at the FHFA. What does this mean for mortgage REIT's high yields?

Why it matters for mREITs
Mortgage REITs including American Capital Agency (AGNC 3.02%) and Annaly Capital Management (NLY 2.26%) are in the business of buying and holding mortgages for investment. Most mortgages they own are agency-backed mortgages, and thus under the regulatory authority of the FHFA -- and Mel Watt.

One of many industry concerns is that Watt will extend or expand the Home Affordable Refinance Program to allow more borrowers to refinance at lower rates.

No big deal, right? Not exactly.

When a mortgage is refinanced, the principal is repaid. For investors, that means getting paid back early, often at a disadvantageous time for the investor.

Consider this: You buy a mortgage-backed security yielding 6%. Rates plummet to 3.5%. The mortgages you own are refinanced and you receive your money back. But now, with rates much lower than before, you're forced to reinvest at 3.5%, not the 6% you were earning before. This is exactly what happened when HARP 1 came into being.

Should you worry about another HARP?
Let's see, using an mREIT's SEC filings.

What we're looking for is how much of American Capital Agency's portfolio is yielding as much or more than the current rate on a similar mortgage. For instance, if American Capital Agency holds 30-year MBSes yielding 8%, then clearly these are at a serious risk of refinancing, because 30-year mortgage rates are currently about 4.4%. No rational person would keep a high-balance mortgage at 8% when current rates are nearly half that. 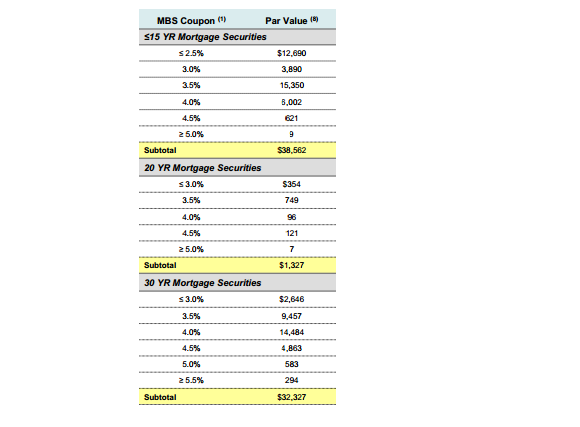 So, let's make quick work of the numbers. American Capital Agency has about $8.6 billion in relatively high-yielding 15-year MBSes. For 20-30-year mortgages, it holds about $5.9 billion in MBSes with a higher yield than current mortgage rates.

Looking at the worst case, we can assume Watt extends HARP to every agency loan, and every borrower takes the deal. In such a scenario, American Capital Agency would see some $14.5 billion in refinances, or roughly 20% of the portfolio as of the last earnings call. This, of course, assumes mortgage rates stay where they are right now.

Is this a big deal?
Hardly. We're looking at the worst possible case. In all reality, either a combination of a low mortgage balance, ignorance, or high closing costs would keep the bulk of homeowners from refinancing. Thus, it's likely that even if HARP were extended or expanded, mREITs would escape largely unaffected.

The point I want to make here is that mREITs have already been through the first round of HARP. They reconstructed their portfolios to avoid refinancing risk. And when the 30-year mortgage rate dropped to 3.5% in 2013, everyone who wanted to refinance already did.

Mel Watt's appointment to the FHFA may be a big deal to some in the mortgage industry (banks, for completely different reasons), but his appointment means next to nothing for mortgage REITs. If there was ever a terrible reason to sell shares of your mREIT, it's because the FHFA has a new director.

Fool contributor Jordan Wathen has no position in any stocks mentioned, and neither does The Motley Fool. We Fools may not all hold the same opinions, but we all believe that considering a diverse range of insights makes us better investors. The Motley Fool has a disclosure policy.