Tesla shares just keep soaring. How high will they go?

Tesla (TSLA 0.08%) traded higher Tuesday morning, up 3.6% at the time of this writing. The stock's gain follows a two-month rebound from lows under $140. But with the stock approaching its all-time high of $194.50, it begs the question: Will Tesla stock soon break into new territory? 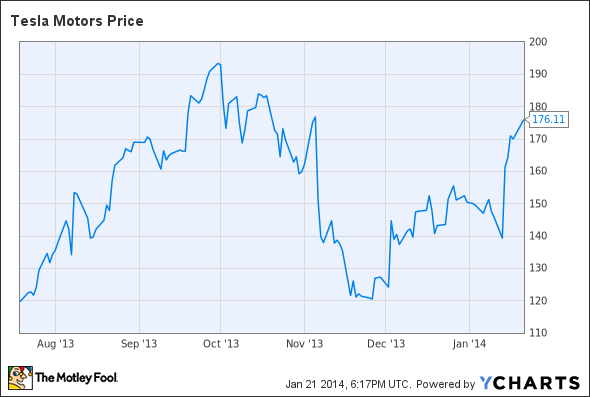 Speculating where any stock is headed in the short term is a tough game -- especially hot stocks like Tesla Motors that trade at wild premiums, inviting volatility. But investors with Foolishly long-term horizons can at least examine the potential drivers behind big price swings to see what the recent run-up says about the stock and where it could potentially go next.

Drivers
Over recent weeks a number or drivers could be attributed to the stock's run-up, but here are what are likely to be the two most important.

A lack of fires. After several high-speed accidents that resulted in Model S battery fires, the National Highway Traffic Safety Administration opened an investigation  to "examine the potential risks associated with undercarriage strikes on model year 213 tesla Model S vehicles." The Model S fires were largely seen as one of the driving forces behind the decline of Tesla's share price from levels around $190. Notably, however, any negative news has the potential to spark a sell-off when a stock is trading at such an aggressive valuation.

But since the first three battery fires, none have been reported. With every day without a fire, the statistical probability of a Tesla battery fire based on passed instances declines -- and it's been over two months now. Another fire would almost certainly put pressure on the shares, so a lack or fires is relieving negative pressure on the stock's extremely forward-looking valuation. Perhaps Tesla's over-the-air update to the Model S suspension at highway speeds was the only fix required to mitigate the problem.

Better than expected Q4 revenue. At the Detroit Auto Show last week Tesla announced that it expects to beat its own revenue guidance by 20% and exceed its estimated vehicle deliveries by about 1,000 vehicles. Based on Tesla's historical quarterly performance, that's a substantial beat.

Q3 and Q4 Model S deliveries in 2012 are not included in chart above (in both quarters, Tesla missed guidance). Source: SEC filings and press releases

Other announcements at the show included expectations for "relentless" growth in 2014 and a plan for a supercharging network in China.

Headed back to $190?
Both drivers are certainly good reasons for investors to have incrementally greater confidence in Tesla stock. But considering just how forward-looking investors' expectations are for the stock, the main story for Tesla is still really a story of supply. The key question still remains tough to answer: Will Tesla be able to ramp up production to produce hundreds of thousands of affordable cars per year by the time it launches its planned so-called Model E in 2016 or 2017?

The second driver (that Tesla is exceeding its own production expectations) is definitely a positive sign that Tesla is ready to execute at levels beyond investor expectations. But the company's performance for the entire year of 2014 will be the first ultimate gauge of just how rapidly Tesla can expand production.

So will Tesla hit highs above $190 again? Trading at more than 10 times sales it's going to take some very bullish guidance from the company when it gives its full-year outlook.