Famous file-hosting service Dropbox may have reached a $10 billion valuation, according to The Wall Street Journal. The start-up became one of the most highly valued companies backed by venture capitalists after it raised roughly $250 million in a funding round lead by a BlackRock investment fund.

Dropbox's latest funding round suggests the company's valuation has more than doubled since late 2011. The current figure is also $2 billion higher than the valuation obtained in November 2013.

Dropbox has clearly benefited from an increasing demand for data storage, as evidenced by its more than 200 million users and 4 million business accounts. Not surprisingly, tech giants Apple (NASDAQ:AAPL), Microsoft, Amazon (NASDAQ:AMZN), and Google (NASDAQ:GOOGL) are all interested in capturing market share from Dropbox. But why is Dropbox worth $10 billion to investors? And how can tech giants replicate Dropbox's amazing success in the cloud storage segment? 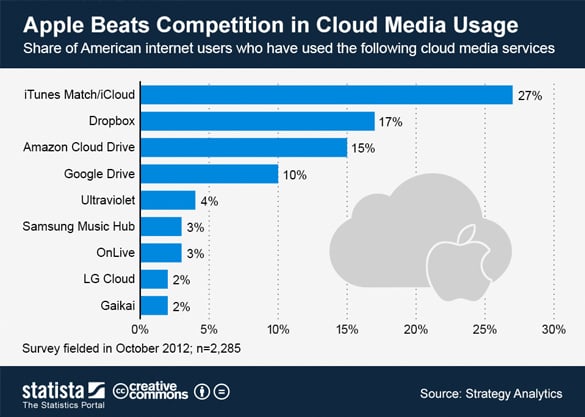 The promising market for data storage
Dropbox, which had 2012 sales of $112 million, recently reported it was targeting more than $200 million in sales for 2013. Therefore, the latest funding round could be valuing Dropbox at 50 times trailing revenue.

At first glance, a $10 billion valuation may seem unsustainable. However, the company is set to benefit enormously from a massive increase in the global demand for data storage.

As tech analyst Amit Daryanani notes, the raw amount of data that's being created is growing at about a 50%-55% clip annually. And, according to Statista, global cloud computing service revenue in the storage segment is expected to almost double between 2014 and 2016.

At the same time, Dropbox's sales and earnings may improve considerably in the medium run. This is because the company is gradually shifting its focus from user-base growth and personal accounts to monetization and enterprise services. For example, the company has begun selling security and other premium features to companies, who want to control how their employees store files.

Beyond data storage
The company has also shown strong interest in going beyond data storage. In March 2013, Dropbox acquired Orchestra, the start-up behind famous email app Mailbox. According to Forbes writer Tomio Geron, this acquisition may suggest that Dropbox plans to build a set of features -- from managing photos to loading movies -- is addition to providing data storage.

Replicating Dropbox's success
A minimalistic design, perfect synchronization, strong branding, and a word-of-mouth marketing strategy has helped Dropbox to achieve great popularity. And although there are plenty of competitors offering more space -- Tencent's Weiyun data-storage service is said to provide users with 10,000 gigabytes -- Dropbox has so far managed to protect its leading position in the cloud data-storage market.

With more than 320 million users, Apple's iCloud service is probably larger than Dropbox in terms of user metrics. Note that, unlike Dropbox, which promotes its cross-platform nature, iCloud is tied to Apple's operating system. Apple's service has received mixed reviews so far, with some developers criticizing it as "being too difficult to use."

Google is also in the game. Its Google Drive service was launched four years after Dropbox. However, due to its integrated suite of cloud-based apps -- Google Docs -- the Internet giant is believed to be experiencing fast growth in this segment. The company is selling its cheap Chromebooks with a 100-gigabyte Google Drive plan for two years.

Amazon is also trying to conquer this space. The company wants to differentiate its Amazon Cloud Drive service by providing a music player that allows users to stream music on up to 10 devices.

Final Foolish takeaway
The enormous increase in global demand for data storage may allow Dropbox to nearly double its annual revenue. As a result, the company now enjoys a rich valuation. Surely, there are plenty of competitors. But thanks to a simple design, perfect synchronization, and strong branding, Dropbox should be able to continue growing.