When investors think of Dr Pepper Snapple Group (NYSE:DPS), a multibagger opportunity probably doesn't come to mind. After all, the company's No. 1 product -- Dr. Pepper -- is smack dab in the middle of the carbonated-drink category, which health-conscious consumers are beginning to shun for more healthy options. As a result, management expects net sales to be completely flat for fiscal 2013.

In addition to a tough carbonated-drink climate, Dr Pepper failed to outperform the S&P 500 index over the past three years, though it did surpass the returns of megacompetitors Coca-Cola (NYSE:KO) and PepsiCo (NASDAQ:PEP). 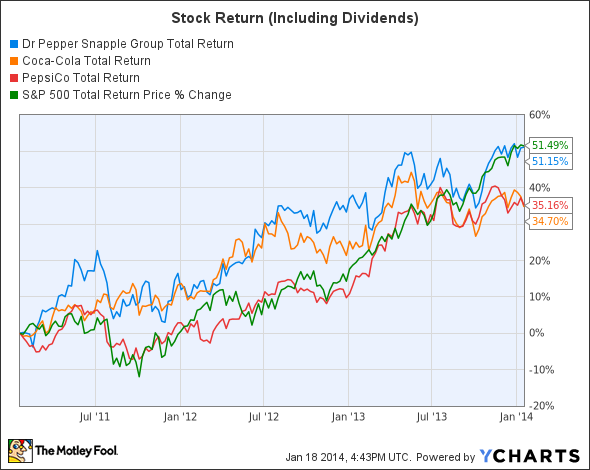 Yet even in this situation, I believe that not only is Dr Pepper cheap right now, there's also one major catalyst for this company not priced into the stock. Getting in today -- in spite of touch economic conditions and general bearish sentiment -- could present investors with a multibagger opportunity.

Dr Pepper is cheap
To determine a stock's value, we can look at several different metrics -- P/E ratio, price/book value, and even dividend yield. No matter how you slice it, Dr Pepper looks cheap. 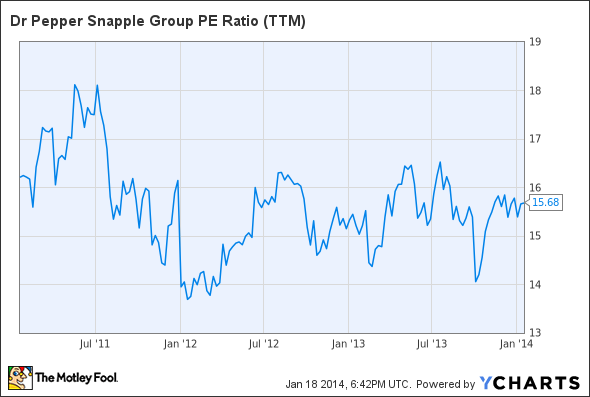 Beyond the simple P/E ratio, Dr Pepper is cheap when considering its price/book value.

And finally, Dr Pepper is cheap when considering its dividend yield -- currently sitting at 3.1%. This beats out Coca-Cola's 2.8% and PepsiCo's 2.9%. The dividend has been paid out every quarter since it was started in December 2009 and has increased 150% during that time.

Incredible portfolio
Dr Pepper isn't a one-trick pony. This company's portfolio is bursting at the seams with recognizable brands. It owns megabrands such as Dr Pepper, Snapple, and Country Time, as well as easily recognizable brands that include Hawaiian Punch, Yoo-hoo, 7-Up, and A&W Root Beer. It even controls small brands with cult-like followings like Sun Drop and Cactus Cooler.

However the company doesn't just have a large beverage portfolio but a diversified snack division as well with its Mott's brand. Since this brand is mostly natural fruit products, it gives the company a bit of a buffer as consumers change habits. While the Dr Pepper brand was down 1% in the last quarter, Mott's was up 1%.

While not as diverse as PepsiCo, Dr Pepper does have enough diversification to steady itself during tough times.

The potential catalyst
Dr Pepper's management is blaming flat results on a tough consumer environment, and potential investors do need to heed this assessment. But one issue not being talked about is the impact of Dr Pepper's current market penetration.

According to Beverage Digest's top-10 brands by sales, Dr Pepper is No. 5 and Diet Dr Pepper is No. 10, gobbling up 6.5% and 1.8% of the United States' market share in 2012 (the most recent data compilation), respectively. Sure, it's still a long ways from Coca-Cola's industry-leading 17% market share, but two top-10 brands is nothing to sneeze at.

This data shows that Dr. Pepper doesn't have too much room to grow domestically, but therein lies the hidden opportunity. Currently the company only does business in North America, leaving a huge international runway for growth. Consider that in 2008, only 8% of Monster Beverage's (NASDAQ:MNST) sales came from abroad.

For Dr Pepper, the ball is already rolling. In March it announced that it had reobtained the distribution rights from Mondeléz International for Snapple (and other beverages) in key Asian-Pacific countries like Japan, South Korea, and China. This move is likely a signal that management is beginning to think toward international expansion -- the greatest untapped opportunity this company has.

It's worth mentioning that this is an opportunity that Coca-Cola and PepsiCo don't have anymore. With a large international presence already, these two companies have already capitalized on the market that awaits Dr Pepper.

The multibagging conclusion
An investment in any carbonated-beverage manufacturer is not without risk. A mild consumer shift is happening. But I believe there's very little downside in a Dr Pepper Snapple investment. With its low valuation and better than 3% dividend yield, it should at the very least continue to perform with the market.

But should the company capitalize on its tremendous international opportunity, this stock could become a multibagger.