If consumers consistently score one cruise line higher than its peers, then that cruise line is the most likely to see sustainable growth. This information would also benefit a traveler.

Whether you're looking to invest in a cruise line or go on a cruise, the following information should be of interest to you. If you're an investor, then there's a good chance that you have heard of Glassdoor.com -- a site that allows employees to leave anonymous reviews of their company. Cruiseline.com is just as important for investors, but in a different way.

Tens of thousands of travelers rate and review their cruise line experiences on Cruiseline.com. All of these reviews are verified, meaning that all reviewers have gone on the cruise they're reviewing. Most importantly, with the growth of social media, word of mouth is more important than ever before. Every experience plays a potentially significant role toward the future growth, or lack of growth, for a cruise line. 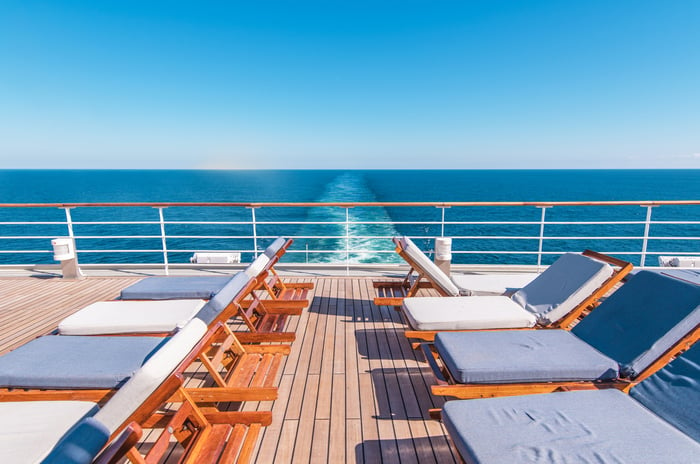 Travelers rated Royal Caribbean a 3.9 of 5.0, a relatively high score. This score is based on 10,952 reviews. Therefore, these results can be trusted. Below is a breakdown for how travelers scored Royal Caribbean:

The majority of Royal Caribbean guests rated their experience 4 Stars, but a 5-star rating took a close second. The biggest positives mentioned for Royal Caribbean include beautiful ships, an attentive staff, excellent food, and great entertainment. Negatives were difficult to find, but repetitive entertainment and crowded restaurant seating on Independence of the Seas were mentioned more than once. However, travelers appeared to be pleased with Royal Caribbean overall.

Royal Caribbean enjoyed stock appreciation of 33% over the past year, which appears to be justifiable. Based on traveler ratings and reviews, continued success is possible, despite Royal Caribbean trading at 149 times earnings.

Royal Caribbean is a winner, but it's not the highest-rated cruise line. The big winner will be revealed soon, but first let's take a look at another popular cruise line.

Travelers rated Carnival a 3.6 of 5.0. This is higher than many travelers might expect. And it's based on 16,253 reviews. Therefore, you can trust it. Below is a breakdown of how travelers score Carnival:

The majority of Carnival guests rated their experience 4 Stars. Despite being in the news for all the wrong reasons over the past few years, most Carnival guests appeared to be at least somewhat pleased with their experiences. The biggest negative was that some guests who sailed on Carnival in earlier years now feel as though they're treated more as a number than someone special, and that the crews don't possess as much fun spirit as in the past. This could relate to built-in gratuities, but that's just speculation.

Carnival is trading at just 29 times earnings. And despite all the negative press, it has seen stock appreciation of 10% over the past year. Based on traveler ratings and reviews -- the best indicator of long-term success -- Carnival should remain a decent investment and cruise line option, as in not the best but not to be underestimated either.

The results for the next cruise line probably won't surprise you.

The majority of Disney Cruise Line guests rated their experience 5 Stars. The reviews were overwhelmingly positive. Numerous travelers expressed having the greatest vacation of their lives. The food, spaciousness, entertainment, and Castaway Cay all received praise. But what stands out most is that many Disney Cruise Line guests report being treated like celebrities from the time they stepped on board.

This is yet more proof that Disney is one of the most well-run companies in the world. It's currently trading at 22 times earnings, and its stock appreciation of 44% over the past year has made its investors happy.

Disney is all about delivering the best entertainment experience possible, and cruise ships are no exception. This Disney mind-set is one of the reasons the company has been such a consistent winner through the years. This trend should continue.

Norwegian Cruise Line has grown at a rapid 8.07% on the top line over the past year. That's impressive, but based on traveler ratings, this trend might not be sustainable.

The majority of Norwegian Cruise Line guests rate their experience 3 Stars. Many travelers appreciated the nightlife, but aside from Norwegian Pearl, numerous travelers complained about the quality of the food. Note: travelers raved about the food on Norwegian Pearl. Norwegian Jewel received the most complaints in regards to food.