IBM (NYSE: IBM) has struggled in recent years with weak top-line performance, as corporations continue relying more on public cloud providers to reduce their IT budgets. After collecting more than $106 billion in annual revenue in 2011, the company has experienced no revenue growth.

However, Big Blue is also well-known in the industry for being able to reinvent itself. The company sold its profitable PC business to Lenovo (NASDAQOTH: LNVGY) in 2004 to focus on software solutions and x86 servers. Lenovo then used IBM's hardware to become the world's largest PC manufacturer. Now, IBM may be interested in selling its low-end x86 server business, with Lenovo again as potential buyer. Once more, a new Big Blue is in the making. The new IBM is expected to be more focused on cloud computing, a space dominated by services such as Amazon's (NASDAQ: AMZN) Web Services. But how does IBM plan to win market share in this highly competitive market? 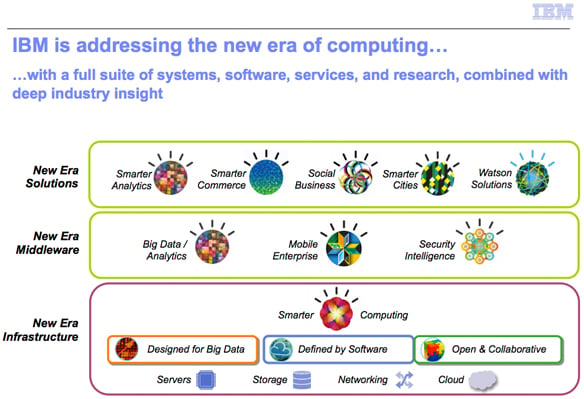 The cloud strategy
IBM plans to invest more than $1.2 billion on as many as 15 new data centers across the world, as part of is strategy to expand its cloud services. With a clear focus on emerging markets in mind, the new cloud centers are to be located in Mexico City, China, Hong Kong, and India, among other places.

With this investment, IBM plans to double cloud capacity for SoftLayer, a dedicated server, managed-hosting and cloud-computing provider that Big Blue acquired last year for $2 billion.

By increasing its number of centers to 40, Big Blue plans to continue capturing more market share in the promising cloud market, which is expected to reach $200 billion in worldwide revenue by 2020, according to the company's forecast. Note that since Big Blue acquired SoftLayer, it has gained 2,400 new clients.

Addressing every segment of the market
IBM's cloud strategy has two components. First, the company plans to target price-sensitive customers who are willing to use public cloud to keep IT costs low.

This is an emerging market segment, dominated by Amazon Web Services, or AWS, an efficient cloud server farm popular with web developers due to its low price, simplicity, scalability, and efficiency. A promising business unit among Amazon, the price of AWS has been lowered more than 30 times since launching in 2006. Macquarie Securities estimates that the division's contribution to total revenue was roughly $2 billion in 2012. They expect this figure to jump to $5.9 billion in 2014.

The acquisition of SoftLayer and recent investments in data-center expansion should provide Big Blue with enough tools to compete against AWS. SoftLayer has a complete portfolio of hosting and cloud solutions, with a particular focus on providing services to small and medium businesses. For example, SoftLayer's CloudLayer service allows customers to deploy their own virtual cloud servers for as low as $50 per month. Each cloud server is based on 2.0 GHz processors, and can be deployed in less than five minutes.

The good news is that Big Blue also plans to continue addressing the needs of governmental institutions and big corporations. As IBM executive John Kelly explained at the 2013 Credit Suisse Technology Conference, all of the big databases of banks and retailers have historically resided in private data centers.

There will always be a place for expensive mainframe computing in the tech world. This is because certain customers need high standards of security to do their business. For them, public cloud isn't an option. And in case some of these clients decide to migrate to private cloud systems, IBM is probably the only company around that can provide a smooth transition between mainframe technology and the private cloud.

Final Foolish takeaway
IBM's cloud strategy looks promising. Data-center expansion and the acquisition of SoftLayer, which offers public cloud virtual servers for as little as $50 per month, will allow Big Blue to capture market share in the promising public cloud segment. At the same time, the company will continue providing mainframe and private cloud solutions to institutional clients.