SAP (NYSE:SAP), the largest enterprise resource planning software company in the world, released its full-year earnings guidance early this week. The company announced it is expecting a decrease in operating profit for next year. It changed its profitability targets, and now expects operating profit to reach 35% of sales by 2017 rather than by 2015.

The good thing is that the company plans to increase sales to at least $30 billion by 2017. With revenue for 2013 coming in at $22.7 billion, the company has three years to increase its top line by more than $7 billion. This target is quite ambitious. Oracle (NYSE:ORCL) has acquired several competitors of SAP in order to build a solid portfolio of enterprise resource planning, or ERP, software. And cloud players such as Workday (NASDAQ:WDAY) continue capturing market share due to their low fees. In this difficult context, how does SAP plan to increase its revenue to $30 billion in three years? 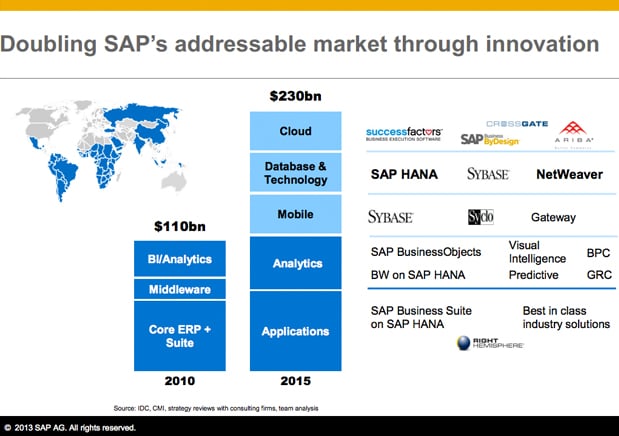 Explaining the slowdown
After four years of delivering double-digit growth, SAP posted a significant decrease in revenue from software-related services in the latest quarter. This segment experienced a slowdown, with 6% growth versus 14.5% last fiscal year. The company's professional services division also shrunk by roughly 6%.

Although these results look disappointing at first glance, it's worth remembering that the entire traditional tech industry is suffering from lagging sales, due mostly to customers shifting to cloud-based services. IBM, which focuses on infrastructure solutions for enterprises, generated full-year revenue of $99.8 billion for 2013, down 4.6% compared to the year before.

Even Oracle, which has expanded its cloud division in recent quarters to avoid losing market share to Workday and other cloud players, is suffering poor top-line performance. The company's revenue for the second quarter rose barely 2%, slightly ahead of expectations. At the same time, Workday, which sells cloud-based applications to mid-sized corporations looking for human resources assistance, saw its revenue increase wildly.

Considering SAP is still heavily exposed to its legacy businesses, its 6% revenue growth rate is an outstanding achievement.

It's all about the cloud
SAP is successfully using its fast-growing cloud-based services to offset the negative effect that legacy software businesses have on revenue.

Note that SAP's cloud revenue grew 130% in the fourth quarter. The key reason for this is acquisitions. As SAP CFO Werner Brandt mentioned, if you eliminate the impact from acquisitions, the growth rate would actually be 32%.

SAP's acquisition of SuccessFactors, a company focused on human resources management applications, for $3.4 billion in 2011, and Ariba, a leader in cloud-based collaborative commerce applications, in 2012 for $4.3 billion, are finally starting to pay off.

Moreover,  the fact that SAP pushed back its profit targets suggests the company may be preparing to acquire more cloud companies in an attempt to capture more market share in the promising global cloud services market, which in 2013 grew by almost a fifth, reaching $131 billion in size, according to Gartner.

Innovation
SAP is also mixing cloud technology with database technology to develop innovative services. For example, the company used the technologies it developed and acquired in the past decade to develop HANA, an in-memory appliance for business applications allowing real-time responses. With the ability to analyze big data and get immediate answers to any kind of business question, the cloud-deployable service has become SAP's fastest-selling product of all time, with more than 3,000 corporate customers and roughly $900 million in annual revenue.

Final Foolish takeaway
Overall, SAP's cloud strategy based on using acquisitions and innovative products to generate revenue looks promising. The company is already generating more than $1 billion in cloud revenue, and it has more than 3,000 subscribers to its HANA service. These figures are likely to increase in the coming quarters.