The deal includes all IBM servers built around Intel (INTC -0.57%) or Advanced Micro Devices (AMD 1.42%) processors, running Windows or Linux. AMD and Intel will shrug and move on, since Lenovo is taking over the business. It's not like IBM just killed the entire System X server line -- the products are just under new management.

Lenovo will bring "continued innovation and a clear commitment to the x86 industry" to the table, according to Lenovo CEO Yang Yuanqing. IBM's commitment here is clearly fading, so let's call it an upgrade for Intel and AMD.

Lenovo is paying $2.3 billion for IBM's x86 server lines in a combination of cash and Lenovo stock. You'll recall that Lenovo once paid $1.25 billion for IBM's PC systems group. This new deal is simply a second dip into a well-worn strategy.

And may I remind you that the first deal didn't exactly kill Big Blue? IBM has been crushing the market since getting rid of its low-margin PC segment: 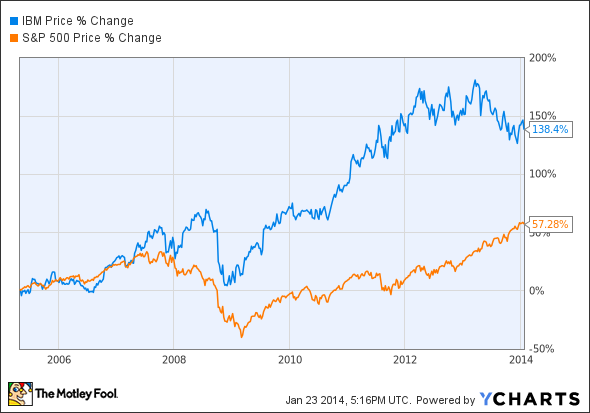 IBM will continue to sell System X servers, but as a reseller partner to Lenovo rather than under the old IBM badge. In return, Lenovo will resell IBM's storage hardware and cloud services, giving IBM another big entry point into Lenovo's Chinese home market.

When rumbling of this deal first emerged nine months ago, I thought it was a terrible idea. IBM would sacrifice its admired one-stop-shop business model in return for a quick cash infusion. But that was before IBM's strategy change became obvious, and the Lenovo deal suddenly makes sense.

IBM is all about high-margin software sales and support service contracts now, and CEO Ginny Rometty is simply taking the next logical step in that transformation.

Good move, Ginny. You can teach a 103-year-old dog new tricks, after all.