The world isn't as simple as you think. 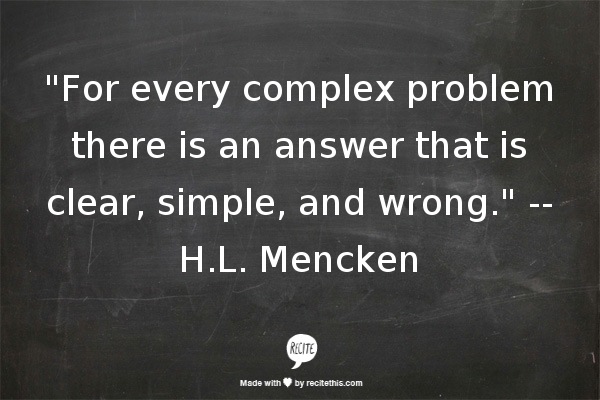 The Federal Reserve began printing money with abandon almost seven years ago. From Day One, people warned that easy money was certain to lead to hyperinflation. The warnings came from cranks and Nobel laureates, goldbugs and billionaires.

All were wrong. By any credible measure, whether from the government or private sources, inflation has been well below average for the last five years. A gallon of gasoline -- the classic symbol of inflation's wrath -- costs less today than it did almost six years ago.

Einstein advised that "everything should be made as simple as possible, but not simpler." It's tempting to oversimplify things and assume the Fed printing money automatically means runaway inflation. But it's more complicated than that. Inflation is more about private banks lending than it is about the Fed printing money. If you missed that over the last seven years, you've been dead wrong.

Here are three other popular warnings prone to dangerous oversimplification.

Popular warning: "All of these students racking up $100,000 in student loans will cause the next financial crisis. Just look at the default rates!"

Why it's more complicated than that: Graduates racking up huge amounts of debt aren't the problem. It's the students who drop out of school with a small amount of debt you should worry about.

Americans owe more than $1 trillion in student loans. The default rates are high, and most student debt can't be discharged in bankruptcy. It's a dangerous statistic and will leave millions of Americans in terrible financial shape.

Why? Because people with a lot of student debt probably graduated and can now earn a higher income than a nongraduate. People with a small amount of student debt are more likely to have dropped out of college, leaving with, say, two years' worth of debt but no degree to show for it. They're no more employable than when they started, and they get crushed by even a small amount of debt.

If everyone who started college actually graduated, total student debt would go way up, but default rates would likely go down.

Popular warning: "The labor force participation rate is falling. That's a sign of how weak the jobs market is."

Why it's more complicated than that: Most of the decline has nothing to do with the economy, but demographics and education.

Take the number of Americans either working or looking for work and divide it by the total number of working-age Americans, and you get a figure called the labor force participation rate.

It's been plunging lately. Sixty-seven percent of the working-age population took part in the labor force in 2000. That fell to 65% in 2009, and to 62.8% last month -- the lowest level since the Carter administration.

Pessimists have used this statistic to argue the jobs market is worse than it looks on the surface. One seemingly inconsolable analyst said if you ignore the falling participation rate, the "real" unemployment rate is nearly 40%, which is way worse than the Great Depression.

But our falling labor force participation rate isn't all about the economy being weak. It's mainly about demographics. We know this because demographers predicted the participation rate would drop to exactly where it is today nearly a decade ago, years before anyone mumbled the words "financial crisis."

As baby boomers age, a shrinking share of the population wants to work. They hit their late 50s and early 60s and retire. Eight years ago, economist Stephanie Aaronson and colleagues predicted demographics and other structural factors would cause the labor force participation rate to fall to 62.9% in 2014, nearly identical to the 62.8% registered last month. In November, economist Shigeru Fujita showed that "the decline in the participation rate since the first quarter of 2012 is entirely accounted for by increases in nonparticipation due to retirement."

And more young Americans are attending college, holding them back from the labor force. Among Americans ages 16 to 24, the entire decline in the labor force participation rate from 2002 to 2012 could be explained by the rise in the educational enrollment rate.

The jobs market is still bad. But you can't point to a falling labor force participation rate and say it's a sign of things getting worse. It'd probably be falling even if the economy were booming.

Popular warning: "When interest rates rise, the amount of interest we'll owe on the national debt will go through the roof and blow a hole in the federal budget."

Why it's more complicated than that: Interest rates don't rise in a vacuum. The forces that cause interest rates to rise could offset the rising cost of our national debt.

What happens when interest rates rise?

Well, our interest bill will rise.

But that doesn't have to be a big problem.

Interest rates will likely rise when either inflation or real economic growth increase. In either case, the amount of tax revenue the government takes in will go up, too. If we had 10% inflation, people's wages would be rising by about 10% (in aggregate), bringing in more tax revenue than the year before. Even as interest rates rise, the amount of interest we owe as a percentage of government revenue -- the number that really matters -- might not budge.

It could even go down. That's what happened starting in the mid-20th century, when the government exited World War II with an incomprehensible amount of debt, and interest rates spiked from 2% in the 1950s to nearly 20% by the 1980s. The amount of interest the government paid on our national debt each year jumped tenfold, from $4.8 billion in 1950 to $52 billion by 1980. But this wasn't a problem, because the size of the economy also grew tenfold, and the amount of tax revenue the government brought in grew 11-fold. Interest payments as a percentage of the economy were actually lower in 1980 than at the end of WWII.

The economy doesn't need to grow as fast as it did in the 1950s for this to occur. As long as the budget deficit is lower than GDP growth, debt as a percentage of GDP declines. That's already the case today. And as long as interest rates are lower than GDP growth, interest as a share of GDP will decline, too. Interest rates could rise substantially without really hurting the country's finances at all.

There are 315 million people in this country. Twenty million businesses. Thousands of lobbyists. Infinite irrationality. Nothing is ever as simple as you think it is. Good luck making sense of it all.