Last year I wrote an article about four U.S.-listed Chinese small-cap stocks I considered investment-worthy. Three have performed great, and one was a bleeder: 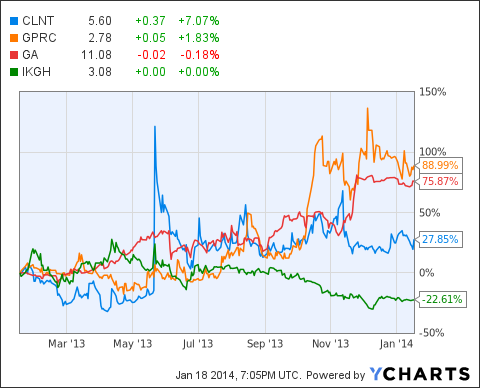 Not a lot has changed since January 2013; the "China Discount" is still there, and there are many opportunities for investors to go long in this space.

Despite some fireworks in the China space, I still think there is a lot of undervaluation in many Chinese stocks listed on the U.S. capital markets. These stocks' P/E ratios and other metrics are still low and cannot be compared with those of their Western counterparts. As stated in my prior article about Chinese stocks: The "China Discount" is not a discount anymore, but a bargain.

As mentioned in my prior article, the risk when you invest in emerging markets is greater than when you invest in American companies. Despite that, I think conditions have greatly improved, and most of the U.S.-listed Chinese companies are in better shape than before.

Corporate governance has improved, and many companies are willing to connect with their investors.

Before I give you some ideas, remember: Don't invest in China unless you can handle the risk. One of the big risks for investors is the complex corporate structure of many U.S.-listed Chinese companies known as variable interest entities, or VIEs. VIEs allow foreigners to bypass Chinese laws and invest in Chinese companies through an offshore holding, typically in the Cayman Islands. Investors could end up having few rights in a VIE if Chinese courts strike them down.

Here are three Chinese companies that could be profitable investments going forward.

Kingold Jewerly
Kingold Jewelry (KGJI) is one of the leading professional designers and manufacturers of gold jewelry. The company is located in Wuhan City, one of China's largest cities, and was founded in 2002. Kingold manufacturers 24-karat gold jewelry, ornaments, and investment-oriented products. The company sells both directly to retailers and through major distributors across China. Kingold has received numerous industry awards and has been a member of the Shanghai Gold Exchange since 2003.

Kingold has undertaken several initiatives that should lead to long-term growth from increasing gold lease agreements with branches of major banks to establishing online product sales.

With a market capitalization of $113.87 million and a current stock price of $1.77, the stock price doesn't reflect the company's promising future. The stock trades at half of its book value. With a P/E of less than four, investors can make a relatively safe bet on the prospect of an increasing gold price, because it would be directly beneficial for Kingold. The stock is a less volatile play than straight gold-miners, because the company provides a value-added service that allows the company to demand a profitable premium, providing downside protection against volatility in the gold price.

Guanwei Recycling (GPRC)
Guanwei Recycling is one of China's leading clean-tech manufacturers of recycled low-density polyethylene (LDPE). Adhering to the highest "green" standards, it has generated rapid growth producing LDPE from plastic waste procured mostly in Europe for sales to more than 300 customers (including more than 150 active recurring customers) in more than 10 different industries in China.

The company is one of the few plastic recyclers in China that imports high-quality plastic waste directly from Germany and other European countries with no middlemen, which allows economic production of the highest grades of LDPE.

This stock was one of my ideas of last year and has gained some ground, but it still has a considerable undervaluation. With a P/E below three, a price-to-book ratio of 0.55, and a healthy profit margin of 16%, investors can have an allocation in a growing environmental-leadership company.

Shanda Games (NASDAQ: GAME)
Last year I recommended Giant Interactive but this company is in the process of going private, so this year investors should have a look at Shanda Games. Shanda is a leading online game developer, operator, and publisher that is heavily investing and growing in mobile games.

The success of Shanda's game Million Arthur in China has added fuel to the rapid growth of the company's mobile-games business. With the valuable experience gained from this game, I think Shanda will launch more successful titles the years to come.

This is not a value play like the other two companies mentioned in this article. You can't buy the stock under book; the catalysts for this company are the mobile growth story and the potential buyout offer that could emerge of parent Shanda Interactive. In any case, given the stock's P/E ratio of less than eight, investors have a chance to profit from a growing mobile-gaming market in Asia.

Conclusion
The three ideas presented here are great places to start your investigation and dig a little bit deeper in the China space. U.S.-listed Chinese stocks are safer today than they have ever been before. All the frauds that had previously emerged in this space had one thing in common: the resignation of an auditor. So any Chinese company that made from 2010 through 2013 in compliance with an auditor, such as the three highlighted above, is less at risk to fail an audit now.

Any weakness in the world stock markets could help boost the gold market and the gold price. Of the three ideas given here, I think Kingold Jewelry has the most upside potential.

For those investors with a strong stomach for volatility, I suggest taking a bite.

What Warren Buffett Can Teach Us About Handling Bear Markets